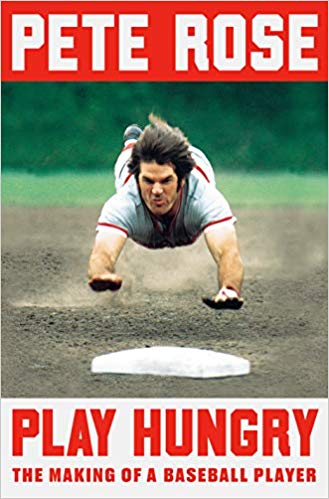 To my late younger brother, Bruce, wherever you are, guess what’s coming forth on what would have been your 59th birthday on earth. A new Pete Rose book. By Pete Rose himself. The title is Play Hungry: The Making of a Baseball Player. And if NBC Sports’ Craig Calcaterra can be believed, which he can be as one of the country’s most acute baseball writers, it stands to be a page-turning stomachache.

“I just got this book in the mail,” Calcaterra tweeted in about the same Thursday time frame during which Albert Pujols bopped a solo home run to nail his 2,000th career run batted in. “It has 2.5 pages (out of 290) about his gambling and ban. No specifics other than a claim that he only bet on the Reds to win, which is irrelevant. There are 6 pages about Pete Rose Jr.’s 11-game big league career.”

Bruce, so help me God I had nothing to do with a birthday present like that.

But I’m also feeling a little like Michael Corleone in The Godfather Part III. You know. “Just when I thought I was out, they pull me back in.” Just when I think I can keep any promise not to address Rose again, something pulls me back in. That’s not exactly the same thing as trying to ditch a life of murder, of course. But just as Michael Corleone could never truly escape organised crime until his own death, I suspect no baseball writer will truly escape Rose until his own or Rose’s death, whichever comes first.

You could argue plausibly that using a mere two and a half pages on a subject to which Rose devoted almost an entire previous book (My Prison Without Bars) makes a certain perverted sense in the current context. “I Blew It and I Know It,” he calls that very brief chapter. Even if it took him three decades and a volume enough of obstructions and lies before he could finally say it that way.

From what Calcaterra says and the advance synopses verify, the book’s prime premise is how Rose willed himself past his long self-admitted skill limits to become the Hall of Famer he would have been if it hadn’t been for, you know, that other stuff. It’s also the fifth autobiographical book he’s produced. And its timing, just like that for My Prison Without Bars and the much earlier Pete Rose: My Story, is just a little too ticklish.

This season the Reds commemorate franchise milestones. Baseball should pay a lot more attention to the 1919 Reds, a hundred years ago, whose World Series triumph was delegitimised by the Series fix plot among some White Sox. How troublesome it must be to the Reds that baseball’s two most notorious gambling scandals injured them directly. The first compromised the integrity of the their first World Series winners through no fault of their own. The second cost them a franchise icon and manager through all fault of his own.

My Prison Without Bars, of course, hit the bookstores in one of the most grotesque cases of horrible timing in baseball history, the same week it was announced that Paul Molitor and Dennis Eckersley were elected to the Hall of Fame. Pete Rose: My Story came forth shortly after his original banishment from baseball and the death of the commissioner who banished him, A. Bartlett Giamatti. And, with its recalcitrant denials of his betting on baseball, the book accomplished nothing other than staining the reputation of its co-author, Roger Kahn (The Boys of Summer).

Indeed, when Rose sat for a 2007 interview with ESPN in which he said, “I bet on my team to win every night because I loved my team,” Kahn—who’d begun researching Pete Rose: My Story before Rose started facing the investigation that got him banished— admitted he wanted to reach for an airsick bag. And that was before the Bertolini notebooks were made public and shredded every last lingering defense Rose and his supporters might have still had.

At least Play Hungry‘s publication date doesn’t cross into a known baseball commemoration. Unless you think anyone would really like to celebrate the 45th anniversary of the drunken ninth inning fan riot that led to an Indians forfeit to the Rangers on 1974’s Ten Cent Beer Night.

The Rose story has been told so often and so voluminously that its sole relevance now would be toward younger fans today who have little idea who this Pete Rose might be, other than that he’s an annual controversy, however large, whenever Hall of Fame votes or Hall of Fame inductions cross our paths. I’m not sure there’s a more polarising Hall of Fame-concurrent subject to be found, not even when other controversial Hall of Fame candidates or inductees (Phil Rizzuto, Jack Morris, Harold Baines, etc.) are involved.

Either writers or online forum denizens pipe up about Rose at those times. The drift runs between keeping Rose out for the transgressions that got him banished from baseball and made ineligible to stand for Hall of Fame election; and, forgiving, forgetting, and letting him in on his career accomplishments while he’s still alive to appreciate the honour. Because, you know, it’s just not a legitimate Hall of Fame without the Hit King.

And the former group has the latter group whipped every time when they ask, as you absolutely must, “Which portion of Rule 21(d) do you still have trouble comprehending?”

Once upon a time Rose autographed baseballs for those visiting his stands in Las Vegas or Cooperstown with this beneath his name: “I’m sorry I bet on baseball.” His autograph repertoire has expanded liberally since. Rose-signed baseballs abound with such additional phrases as:

“HOF?” (Not until a) he’s reinstated to baseball (it won’t happen); or, b) the Hall of Fame changes its rule denying those on baseball’s ineligible list standing on any Hall ballot. And why should the Hall change that rule?)

“I didn’t do steroids.” (No, but he was doing greenies—amphetamines—in his time. Players then and beyond have been given steroid shots for pain, too. Yes, cortisone is a steroid, technically though non-anabolically. And, a lot of those who turned to later actual or alleged performance-enhancing substances, whether particular steroids or human growth hormone, started doing so for pain relief. Yes, you can look it up.)

“There is no crying in baseball.” (Apparently, he doesn’t always remember the tears of joy he shed at first base after he passed Ty Cobb on the career hit parade.)

“Mr. Trump, Make America Great Again.” (President Tweety thinks Rose belongs in the Hall of Fame despite breaking the rules. That could be called sympatico from a man to whom the rules often seem to be that there ain’t no rules.)

“I regret I ever got involved in the book,” Kahn once told the Los Angeles Times about Pete Rose: My Story. “It turns out that Pete Rose was the Vietnam of ballplayers. He once told me he was the best ambassador baseball ever had. I’ve thought about that and wondered why we haven’t sent him to Iran.”

Penguin Press, which is publishing Play Hungry, has also published volumes by the like of Matthew Arnold, Francis Bacon, William Blake, Samuel Taylor Coleridge, and John Steinbeck. (Don’t even think about asking which papers they wrote for, Yogi, wherever you are.) Imagining Pete Rose in their company is something comparable to imagining Denny Crane in Clarence Darrow’s.

“Culture,” Arnold wrote, “is to know the best that has been said and thought in the world.” Along comes Rose, whose flair for the jarring aphorism once made sportswriters hunger but also made baseball men reluctant to investigate what were then only whispers about his darker sides. “Playing baseball for a living is like having a license to steal” is pithy but hardly “Some books are to be tasted, others to be swallowed, and some few to be chewed and digested.” (Bacon.)

“The road of excess,” wrote another Penguin author, Blake, “leads to the palace of wisdom.” Baseball fans know that by way of Annie Savoy quoting it indignantly to Crash Davis in Bull Durham. The road of excess led Rose to breaking baseball’s gambling rule and away from the palace of Cooperstown he craves to join. But wisdom isn’t the same as being a wisenheimer now and then.