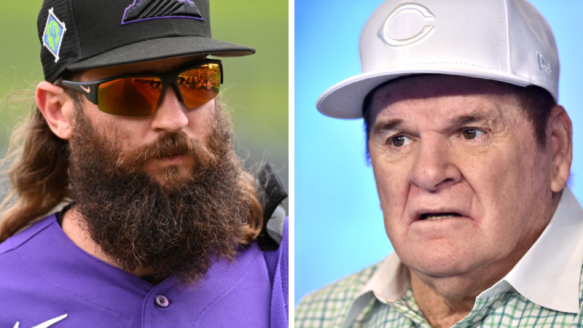 Blackmon (left) has an endorsement deal with a legal Colorado sports book. It doesn’t mean Rose (right) comes off the permanent hook against betting on baseball. (Photo montage by Outkick.)

Almost four years ago, MGM Resorts and Major League Baseball agreed to a promotional deal, MGM Resorts owning several hotel/casinos in Las Vegas and elsewhere. Almost as if by a script, it prompted Pete Rose’s partisans to demand his “rightful” reinstatement to baseball. And it was dismissed simply enough, most profoundly by Craig Calcaterra, then an NBC Sports baseball analyst.

“While there may be the broadest, most cosmic level of discontinuity between baseball going into business with a casino given its ban on players, coaches and umpires gambling,” Calcaterra began, “there is no practical inconsistency or hypocrisy or irony or anything else about it.”

This is because baseball’s ban on gambling was never, ever about gambling being some moral abomination that cannot be countenanced in any way. It was about the manner in which gambling compromised the competitive integrity of the game and thus imperiled baseball as a going concern. Players were gambling on baseball and cozying up to gamblers to throw baseball games. That had to be stopped and it was stopped. Full stop.

What, then, to make of Rockies outfielder Charlie Blackmon signing an endorsement deal with a Colorado sportsbook, MaximBet? Does the first known endorsement deal between an active major league player and a sportsbook—made possible by clauses in the new collective bargaining agreement—equal the open door through which baseball’s most notorious living gambling exile returns to the game’s good graces and, thus, to the Hall of Fame?

Rose’s partisans seem to think yes. Post haste. So does Rose himself. The bad news for them is that they are wrong, on more than one ground. Ground one: As ESPN writer David Purdum noted, MLB policy enjoins Blackmon from promoting baseball betting specifically. Blackmon can promote MaximBet itself as a company but he can’t promote or encourage anything the company does that involves betting on his own sport.

Ground two: Baseball has had promotional partnerships with brewers and distillers in the past. It didn’t and still doesn’t mean that a player, a coach, a manager, or an umpire can get bombed out of their skulls before or during a game. Just let Shohei Ohtani walk out to the mound or check in at the plate with a bottle of sake and a glass in his hand and see if he goes unpunished.

Ground three: If Blackmon were foolish enough to think his MaximBet deal gives him an opening to bet on baseball himself, you can, ahem, bet on it. MaximBet would be obligated to blow the whistle at once, thus subjecting Blackmon to discipline under Rule 21(d), the punishment depending upon whether Blackmon bet on games not involving his Rockies or whether he bet on Rockies games for which he was in the lineup.

Do you need one further reminder? Rule 21(d)’s language does not distinguish between whether you bet on your own team or against your own team. The rule also extends to off-field, non-playing personnel from the most obscure ballpark ticket taker to the most visible team owner to the commissioner of baseball himself.

Just because MLB has a promotional deal with MGM Resorts, it doesn’t mean Rob Manfred himself can belly up to the nearest sports book and drop a bet on tonight’s Dodgers-Padres game. Just because Charlie Blackmon has an endorsement deal with a sports book now up and running in Colorado but planning (according to Purdom) to expand to Iowa and Indiana, it doesn’t mean he’s allowed to drop a bet even on whether the Tigers’ future Hall of Famer Miguel Cabrera will nail career hit 3,000 in his first, second, third, or fourth plate appearance against the Rockies tonight.

“I just came up at the wrong time,” Rose said to USA Today when the Blackmon deal with MaximBet became known. “I was thirty years too early. Baseball is pretty much in bed with gambling now.”

Look, I [fornicated] up. I messed up when I did what I did, ok? I can’t bring it back. However, I would wish baseball would just give me an opportunity to be on the [Hall of Fame] ballot. Not, put me in, let the writers decide. I’ve been suspended since ’89, 33 years ago. That’s a long time. And to be honest with you, it probably cost me $100 million. I’m not complaining, I’m just saying I’ve been punished pretty severely.

Baseball is “pretty much in bed with” legal gambling. Rose seems to forget that one of the most powerful pieces of evidence against him is a notebook recording a considerable volume of his baseball bets—made and kept by Michael Bertolini, a bookmaker outside the lines of legal gambling, through whom Rose bet on baseball including on his Reds while he was still an active player as well as the team’s manager.

Blackmon’s MaximBet deal isn’t necessarily a great look, depending upon your point of view, even if it’s major relief that Blackmon will be on a very tight leash that keeps him away from just promoting baseball betting, never mind betting on the game himself. But the deal doesn’t quite open the door for Rose’s return from baseball’s Phantom Zone, either. And it still isn’t up to MLB to put him on a Hall of Fame ballot.

The Hall itself, not governed by MLB, passed a rule denying those permanently ineligible from appearing on Hall ballots. Rose seems almost as forgetful of that distinction as he and his remaining partisans seem of the distinction between “lifetime” and “permanent.”