Recall if you will that I went to Opening Day in Anaheim with my 28-year-old son. From the moment he became a baseball fan in earnest at age six, his dreams included catching or otherwise obtaining one bona-fide major league baseball at the ballpark. On said Opening Day, 22 years later, I managed to make his wish come true.

An Astro lined a foul into our section during batting practise. Thanks to a small but clustered group of fans standing up adjacent to us, neither Bryan nor myself could see which Astro hit the ball. No matter. It bounded around a few times before making its way beneath my seat, where I snatched it and handed it to him.

Neither Bryan nor I cared that it came off an Astro bat, even if he (and I) might have preferred it courtesy of an Angels bat. It was a baseball, major league regulation, a simple but profound little prize of fandom that you can go a lifetime without obtaining, regardless of how often you’re at the ballpark.

My son’s gratitude was boundless, of course, even at age 28. “You gotta be a man to play baseball for a living,” Hall of Fame catcher Roy Campanella once said, “but you gotta have a lot of little boy in you, too.” Savouring and rooting and appreciating this game means the same thing when you’re watching at home or at the ballpark. Even professionally.

So imagine easily how it felt for a nine-year-old boy in Rogers Centre Tuesday, wearing a Yankee T-shirt with Aaron Judge’s surname and number 99 on his back, praying to God and His servants in the Elysian Fields that maybe, just maybe, he might catch a ball hit by his hero. He got the absolute next best thing.

A Blue Jays fan named Mike Lanzillotta sat in the second deck behind young Derek Rodriguez and his father, Cesar, Venezuelan natives living in Toronto the past five years.  Somehow, the boy’s eagerness got to Lanzillotta throughout the game. He didn’t have to imagine when lo! Judge batted a third time in the top of the sixth inning, against Jays pitcher Alek Manoah, who’d struck him out twice earlier in the game.

Not even Mark Harris, W.P. Kinsella, Ring Lardner, Bernard Malamud, or John Updike could have sketched this one. I’m nowhere in their league so I’m not sure I’m doing it right.

Judge caught hold of a fastball sailing a little inside and drove it . . . right into Lanzilotta’s hands. As Judge rounded the bases, Lanzillotta kept the promise he made to himself and handed Derek the ball. The boy’s gratitude poured into a hug around the older man’s neck and shameless tears of joy. Television cameras caught the moment and it went viral almost at once.

“I almost started crying,” Lanzillotta admitted to reporters. “For real, I almost started crying.” The father soon enough faced a question from his son: “I said, ‘If you were young, and the same thing happened to you, but with a home run off of Derek Jeter, what would you do?’” the boy revealed. “And he said I would cry the same. And fun fact, I was named after Derek Jeter.” 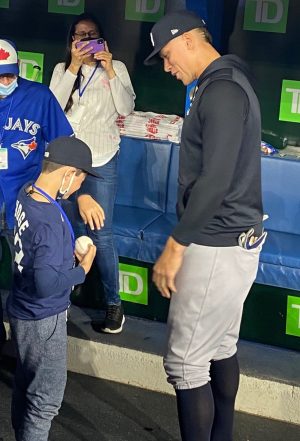 Derek got to meet his Yankee hero before Wednesday’s game.

Funner fact: The tale of Derek Rodriguez, Mike Lanzilotta, and Aaron Judge’s blast reached Judge himself after the Yankees demolished the Jays, 9-1. Reporters told Judge of the Kodak moment. (Oops! Today we’d call it an iPhone moment.) Known for being as fan friendly as the day is long, Judge himself seemed almost overcome by the revelation.

“That’s what’s special about this game, man,” the Yankees’ Leaning Tower of River Avenue told reporters, after grinning and observing you’ll find Yankee fans around the world. “It doesn’t matter what jersey you wear, everybody is fans, everybody appreciates this game. That’s pretty cool. I’ve got to check out that video. That’s special.”

He did more than just check out that video. Before today’s game, Derek got to meet his Yankee hero, who signed the home run ball for him. The still boyish-looking Judge looked as though he’d been taken back to his own boyhood for a few shining moments.

The Blue Jays didn’t exactly appreciate being blown away by the Yankees Tuesday, but it didn’t stop the team from giving more than a tip of the beak to Lanzillotta. They dropped a special team gift package on him for his sportsmanship. Cesar Rodriguez called him a friend for life. His cell phone was all but nuked with texts and calls following his gesture.

“I spilled my beer” retrieving the Judge home run ball, Lanzillotta said, “but it was worth it.”

You should be made to watch that Judge bomb, that Lanzillotta gift to nine-year-old Derek Tuesday, and the boy’s meeting with Judge today. You might learn or re-learn a few things about sportsmanship. About real baseball rooting and caring. About plain human decency.