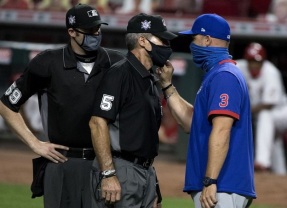 Umpires Nic Lentz (left) and the ever-popular Angel Hernandez (center) debate with Chicago Cubs manager David Ross. On that day, it was Grandpa Rossy objecting to the umps tossing his coach Mike Borzello for objecting to the near-decapitation of Anthony Rizzo by a pitch. Umpire accountability remains a burden on the game for its lacking.

In more than one way, enough major league baseball umpires have something in common with rogue police. The rogue cop survives thanks to a disgraceful (and court-invented) doctrine known as “qualified immunity.” The rogue or at least incompetent umpire survives similarly, if not phrased formally in quite those words. Unlucky for us.

MLB’s government swears it’ll get to the bottom of Joe West throwing out the first general manager of the season Sunday. The way things continue to stand, it looks like that Antarctican beach club is still on sale at a bargain rate.

Mike Rizzo’s heinous crime, all by his lonesome in a club box in Atlanta’s Truist Park, was spending a considerable part of his weekend hollering over dubious calls by West’s crew while his Nationals played and took two of three from the Braves. When Rizzo objected to yet another dubious call Sunday, this time on a called strike that missed the zone, West said, “Enough is enough,” and his crew ordered ballpark security to cart Rizzo away.

Enough is indeed enough, but not the way West thinks. When it comes to MLB holding umpires just as accountable as they’re presumed to hold players, coaches, managers, trainers, medical staffers, front-office workers, and even owners now and then, enough was enough long before this surrealistic pandemically-truncated season. Prowl through the rule book and you’ll be hard pressed to find specific language handing incompetent or rogue umpires qualified immunity. But they have it mostly in spirit.

On the extremely rare occasions when the Wests, the C.B. Bucknors, the Laz Barreras, the Angel Hernandezes, and others are held to account for their behaviours, fans usually  have no right to know how they were disciplined, if they were disciplined. (Usually, but not always exclusively.) Let a player or manager step out of line, and every dollar and day of their fine or suspension hits a line drive on SportsCenter.

I hate to resurrect a dead horse to beat, but many may forget now what happened over twenty-one years ago, when baseball government actually tried imposing a little accountability on the arbiters and the arbiters actually tried telling baseball government to perform an anatomical impossibility upon itself. It led to the self-immolation of the original umpires’ union and the creation of the current one.

We take you back to 14 July 1999, when Major League Umpires Association executive director Richie Phillips announced that fifty-seven of the Show’s then sixty-six umpires would resign effective that 2 September. The fifty-seven “wanted to continue working as umpires, but they want to feel good about themselves and would rather not continue as umpires if they have to continue under present circumstances,” Phillips harrumphed. “They feel in the past seven months or so, they have been humiliated and denigrated.”

The late Society for American Baseball Research analyst Doug Pappas described such humiliating denigration, or was it denigrating humiliation:

Many umps were outraged when umpire Tom Hallion was suspended for bumping a player — though not as outraged as they’d be if a player wasn’t suspended for bumping an ump. When MLB redefined the rulebook strike zone to reflect the umpires’ collective refusal to call the high strike, Phillips insisted that MLB had no right to do so without MLUA approval. Before the season, the MLUA blocked MLB’s proposal to move control of the umpires from the league offices to the Commissioner’s Office by claiming that the move would constitute a change of employer, entitling the umpires to millions in severance pay.

Phillips reserved his greatest scorn for attempts to hold the umpires accountable for their on-field performance. Upon learning of a MLBPA survey of players, coaches and managers which ranked each umpire against his peers, Phillips sneered, “I don’t give any credence at all to ratings of officials because ratings are always subjective.” When MLB asked clubs to chart pitches and file a report on each umpire’s strike zone, Phillips snarled that this was “just another case of Big Brother watching over us.”

An employer evaluating the competence of its employees. The nerve!

Phillips went so far as to proclaim that, as of that 2 September date, they’d form Umpires, Incorporated, both negotiating to provide MLB umpiring and becoming the sole umpire supervisor. “In short,” Pappas wrote, “Phillips proposed to turn the umpires into a self-governing association, free of MLB control.”

To owners and players alike, this demand was tantamount to a municipal police union demanding an end to civilian control of the police force. Even if the owners had been willing to cede such authority, the screams of the MLBPA would have killed the deal. And the owners weren’t willing. When informed of the umpires’ move, Sandy Alderson of the Commissioner’s Office termed the resignations “either a threat to be ignored or an offer to be accepted.”

Behind the scenes, Alderson and MLB’s lawyers must have been exchanging high fives. By “resigning” — a transparent attempt to evade the no-strike clause in their labor agreement — the umpires had abandoned the protections of their contract and left themselves at MLB’s mercy. Aided by the advice of their personal attorneys, a few arbiters came to the same conclusion and rescinded their resignations.

The net consequence was twenty-two umpires losing their jobs, and losing in court when they sued to allow rescinding those resignations. (In due course, an arbitrator ruled nine of had to be re-hired, while another three would be re-hired in a new collective bargaining agreement, and the ten not re-hired would receive severance pay.)

Dissidents from the Phillips-inspired self-immolation, led by Joe Brinkman and John Hirschbeck, pushed for and got the 2000 decertification of the MLUA, subsequently forming a new union, the World Umpires Association. The new union changed its name to the Major League Baseball Umpires Association in 2018. (The president since 2009, when he succeeded Hirschbeck: Joe West.)

The trigger for the old umps’ union’s madness may not be forgotten by either the umps or the game’s administration today. Perhaps nobody wants to pull it and provoke a madder calamity. Except that there’s no sane reason to keep a rogue cop in uniform entrusted with law enforcement, and there’s no sane reason to allow umpires to act as laws unto themselves, regardless of the rule book or the common sense God gave a paramecium but enough umpires and administrators ignore.

Too many balls continue being called strikes, too many strikes continue being called balls, through the courtesy of an umpire’s “own” strike zone rather than the one prescribed in the rule book. The errant ump can still lean on other clauses in the rules to purge those objecting, and MLB still has strictures against speaking publicly about errant umpiring by players, coaches, managers, and other team personnel.

When an umpire finally throws out a general manager way up in the pandemically-empty stands, for hollering loud enough and long enough that there’s less than consistent competence among the arbiters, it’s time long overdue to consider disqualifying the umpires’ version of qualified immunity. The rogues among the nation’s gendarmes have had it long enough.