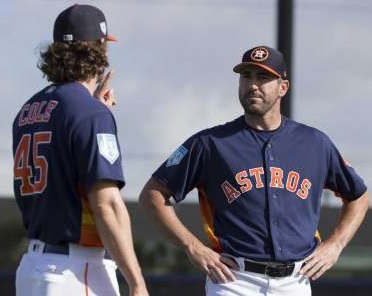 The AL Cy Young Award race is really between Gerrit Cole and Justin Verlander—but could they end up co-Cyners?

Just call this baseball’s True Value season—hardware time. Even if you suspect that this year, like many years, the hardware may not match the true value. And since baseball’s oldest professions include arguing, the hardware should provoke a decent few.

Rookie of the Year

National League—Pete Alonso (Mets) has a decent shot at running away with the prize, particularly for smashing the Show’s rookie home run record and leading the Show with his 53 bombs. Especially since Fernando Tatis, Jr. (Padres) missed about half the season on the injured list. A full season for Tatis might have made the ROY race a squeaker.

Pitcher Mike Soroka (Braves) is the third finalist, and he’ll get some votes for that 2.68 ERA and for being the stingiest pitcher in the league for surrendering home runs in homer-happy 2019. (0.7 HR/9 inning.) But with Tatis missing too much time the prize is probably Alonso’s.

American League—No contest, even with the 9 June callup. It’s Yordano Alvarez’s (Astros) award. He was just that dangerous even in only 87 games. Brandon Lowe (infielder, Rays) and John Means (pitcher, Orioles) were good, very good, but not even close.

Which is why Eloy Jimenez (White Sox) not making the finalists’ list is a small surprise. Two outfield injuries didn’t stop him from hitting 31 out. He wasn’t really close to Alvarez when all was said and done, but he did have a better season than Lowe.

Manager of the Year

Schildt looks to shake out as the winner, though it’s a bloody good thing the votes are voted before the regular season ends. His ugly postgame rant after winning the division series and the Cardinals’ NLCS humiliation at the hands of the Nationals left him a very bad look.

American League—For me, no contest. Whatever happened to the Yankees in the ALCS, they may have been lucky to win 103 regular season games in the first place, with a team resembling a M*A*S*H post-op ward most of the season and a manager who wasn’t sure if he was running baseball games or an urgent care unit.

Rocco Baldelli (Twins) masterminded his team’s remarkable turnaround and AL Central conquest, though it’s possible some voters thought it was as much a product of the Twins’ strategic bombing as anything else. Kevin Cash (Rays) continued doing his share to prove less is more in winning 96 and snatching a wild card entry.

But I suspect the MOY is Aaron Boone’s. If so, don’t be surprised if the hardware comes embedded with a music box—playing the theme to St. Elsewhere.

National League—It looked like it would be a near photo-finish between Jacob deGrom (Mets) and Max Scherzer (Nationals) until Scherzer’s neck and back issues rudely interrupted him down the stretch. Before that, there was a time Hyun-Jin Ryu (Dodgers) looked almost as much like the runaway winner in the making as deGrom proved to be at the finish in 2018.

Then Ryu’s season got interrupted by neck trouble, too, unfortunately. He still managed to lead the Show with his 2.32 ERA . . . but his fielding-independent pitching rate (ERA minus defense) checked in higher (3.15) than deGrom’s (2.67). DeGrom also led the league with 255 strikeouts and with 7.3 wins above replacement-level (WAR).

It may not be the runaway triumph it was in 2018, but deGrom probably has the 2019 Cy Young Award, too. He remained an elite pitcher in 2019, got stronger as the season went onward, and it’s likely that his durability as well as his performance papers give him the edge past Scherzer and Ryu. And they didn’t have to fight as many of their teams’ other problems as deGrom did.

It could be deGrom by maybe a nose and a cheek. And if it is, it would make him and Scherzer an anomaly: no pair of pitchers has been back-to-back with each other in winning back-to-back Cy Young Awards since Roger Clemens (1997-98) and Hall of Famer Pedro Martinez (1999-2000) in the American League.

Could deGrom and Scherzer become co-Cy Young Award winners this time? It’s not exactly unheard-of: Mike Cuellar (Orioles) and Denny McLain (Tigers) were co-winners in 1969 for the American League. It’s never happened in the National League yet.

American League—The given: one or another Astros righthander will win it. (And one ex-Astro, Charlie Morton [Rays], is the third finalist.) The question: which one? The answer: It should be Gerrit Cole. But you never know until you get there.

Because Cole led the American League in ERA (2.50), the Show in strikeouts (an Astros franchise-high 326), the league in fielding-independent pitching (2.65), and the Show in ERA+ (park adjustment factor; 185).

But Verlander punched out an even 300, led the Show with his 0.80 walks/hits per inning pitched rate, 7.14 strikeout-to-walk rate, and nailed both his 3,000th career strikeout and his 300th season’s strikeout in the same game. Both against the same victim. (Kole Calhoun, freshly non-optioned by the Angels, though not for that reason.)

Milestones appeal to award voters. Always have. And they may have been awful tempted to make Verlander only the sixth man in history—and the first ever in the American League—to win a Cy Young Award the same year he pitched a no-hitter. (Milestones, continued: it was Verlander’s third career no-hitter.)

This much is certain: Cole and Verlander are likely to become the first rotation mates to finish 1-2 in the Cy Young voting since Hall of Famer Randy Johnson and Curt Schilling in 2001. We just don’t know which order yet.

My own call is that yes, Verlander hit some significant milestones while having a season for the ages in his own right, but yes, too, Cole was just enough better to win the Cy by a nose and a cheek, too. Of course, they, too, could end up co-Cyners, making them the first American League pair to do it since Cuellar and McLain.

National League—Christian Yelich (Brewers) probably had a hammerlock on the award until his knee injury killed his season. It left room for Cody Bellinger (Dodgers), who’d already yanked his own game to another plateau entirely, to look like the heavy favourite when the season ended. Bellinger was no questions asked the best player on a runaway train team.

Anthony Rendon (Nationals)? He made a case that would probably give him the award if neither Yelich nor Bellinger happened to be in the league this year. The only other flaw in Rendon’s game: He saved his absolute biggest moments for the Nats’ staggering postseason run and triumph, and the votes are cast right after the regular season. His next contract should atone for that.

Now let me be a real stinker. Let me look at Yelich and Bellinger (and, just for fun, Rendon) in terms of what I call a real batting average. I’ll say it again: the traditional batting average underrates what you do at the plate. It treats all your hits equally and takes only those divided by your official at-bats.

A real batting average (RBA) would take your total bases (which count your hits the way they should be counted—all hits are not equal), your walks, your intentional walks (one more time: you deserve extra credit if the other guys would rather you take first base than their heads off), your sacrifices (bunts and sac flies), and the times you got hit by a pitch, and divides the sum of those by all your plate appearances and not just your official at-bats.

Well, now. If the MVP voters looked that deep, Yelich might still shake out as the National League’s MVP. Might. If they’re not, either Bellinger wins the prize outright or Yelich and Bellinger could become co-MVPs. Could. It’s only ever happened once before: in 1979, when Keith Hernandez (Cardinals) and Hall of Famer Willie Stargell (Pirates) did it.

American League—Mike Trout (Angels) had the award in the vault, with armed guards outside the doors, until he, too, was taken down for the season with an early September injury. Did it leave enough room for Alex Bregman (Astros) to claim the prize?

Trout missed just about the entire final month of the season and still almost managed to lead the league in home runs with his career-high 45. (The Royals’ Jorge Soler beat him out and Soler had to hit three over the season’s last two days to do it.) He also still led the Show in on-base percentage (.438), the league in slugging percentage (.645) and OPS (1.083), and the Show in OPS+ (park adjustments; 185).

Bregman just edged out Trout for the league’s overall WAR lead—8.4 for Bregman, 8.3 for Trout. But Trout still led the league in offensive WAR (8.3) and was .6 ahead of Bregman that way. Bregman’s slash line is his own career high, by the way, not to mention his leading the league with 119 walks.

Marcus Semien (Athletics) is the third finalist for the award, and while it was a joy to see him improve his game that much, he’s not yet in either Trout’s or Bregman’s league. And unless voters look for something else beyond what I’ve just discussed, the award’s going to be between Trout and Bregman.

Now I’ll be a real stinker again, this time looking at Trout and Bregman according to RBA. Drumroll, again, please . . .

The RBA difference between Trout and Bregman (.070) is greater than that between Yelich and Bellinger (.033). Now ponder how Trout and Yelich would have looked if their injuries didn’t end their seasons when September was barely born. (Ponder, too, the intentional walks all six MVP finalists were handed this year. Teams didn’t fear Rendon and Bregman quite as much as they feared Bellinger, Trout, and Yelich.)

The AL MVP voters still might have pondered co-MVPs between Trout and Bregman, after all. And there is that Hernandez-Stargell precedent.

Still, the voters may yet have concluded that Bregman swung that well (especially in the season’s second half) and played excellent third base for a 107-winning team but Trout still shouldn’t be penalised because he doesn’t have a team its and baseball’s still-best all-around player can be proud of. He’s the reason the Angels drew over three million fans despite their fourth straight losing season.

My nickel would probably go to Trout in the American League and Yelich in the National League. Trout’s RBA difference from Bregman is just too vivid, and so is Yelich’s over Bellinger. And my nickel isn’t worth a dime. (Sorry, Yogi.) But it wouldn’t be the end of what’s left of the free world if 2019 proved also to be the year of the co-Cy Young Award winners and the year of the co-Most Valuable Players. Would it?