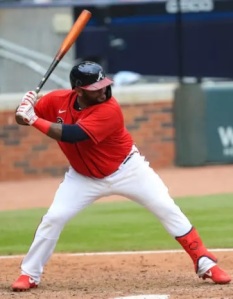 As a matter of fact, Sandoval’s lifetime slash line as a pinch hitter (he’s batted in the role 149 times) is .309/.362/.537 with an .899 OPS. Full-time players with career slash lines like that might fantasise about their Hall of Fame plaques, sooner or later.

At 34, who would have thought Kung Fu Panda—the roly-poly third baseman who hit like a Hall of Famer one minute (especially when he blasted three home runs in Game One of the 2012 World Series) but looked like a Hall of Shamer the next half hour—would find a home in both a Braves uniform and what’s normally the most thankless job in baseball?

You think relief pitchers have a stressful existence? Pinch hitters live “a baseball lifestyle that would drive a saint to drink,” Thomas Boswell wrote in an early 1980s profile of the breed, “then they expect you to play it like a straight man . . . Pinch hitting is baseball’s mission impossible.”

If you think that’s overstating the case, be advised that only one pinch hitter was ever added to an All-Star team because he was that prolific a pinch producer. “Pinch hitting was great to me,” that man told Boswell, when he was a robust 58 and claiming he might still be playing then if they’d let him use an aluminum bat. “I can sit right here in my den and look at a plaque they gave me with every one of the 145 hits and who it was off, where, and when.”

That man was Smoky Burgess. A catcher by trade, a pinch hitter by early enough co-trade, and owner of the most pinch hits in Show history when he retired after the 1967 season. Not every man who wore the pinch hitter’s fatigues could be as sanguine as he was about the job.

“If I had to do it all over again,” said Gates Brown, whose first major league plate appearance was pinch hitting for Tigers pitcher Don Mossi in the fifth inning on 19 April 1963—and hitting one into the right field seats, “I wouldn’t. Hell, nobody wants to be a pinch hitter. I had to do it to survive.”

Survival of the pinch fittest. Brown should only know. According to my Real Batting Average metric, Brown remains the number eight pinch hitter ever. The Gates of Wrath was certainly number one among pinch hitters who got the call after he’d gotten himself a couple of hot dogs, thinking he wasn’t going to get the call. Until he did.

He all but inhaled one of the hots and stuffed the other quickly into his jersey, lined what proved the winning run home, then slid into second on his belly subsequently—and felt the doggie  explode upon landing. He looked as though he’d been opened for heart surgery without being undressed and shaven first.

Some of baseball’s most famous hits were pinch hits. Two of them—Dusty Rhodes in 1954, Kirk Gibson in 1988—won World Series games by flying over fences. Most of the time, the pinch hits aren’t that dramatic even if they do prove bank for a game. Sometimes too-early success in the role marks you for life, or so you think.

Many are called, few enough are chosen. Fewer than that survive at all, never mind shine in the role. Lenny Harris is the pinch-hit volume leader (212); Matt Stairs is the pinch home run leader (23). Crowley and Brown may have doomed themselves in their estimation to the wrong baseball life with their early pinch hitting success, but it could have been worse. 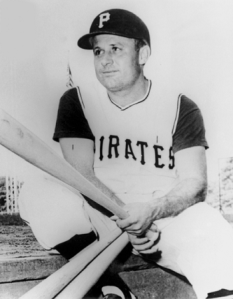 They could have been Brooks Conrad. He pinch hit a pair of game-winning grand slams in 2010. Then he committed three errors at second base in Game Three of that year’s division series against the Giants, prompting manager Bobby Cox to keep him out of the Game Four starting lineup. He was sent up to pinch hit to lead off the bottom of the ninth—and flied out for the first of the final three outs and the Atlanta series loss.

Conrad’s career lasted only three more MLB seasons and one Japanese season from there. He finished with 29 MLB pinch hits in 181 pinch appearances. He still holds the record for most pinch hit game-winning salamis in Show history. It could have been far worse.

“You pitcha the ball, I hitta the ball,” said Manny Mota, the man who broke Burgess’s lifetime pinch hits record. Harris broke Mota by 62 before he retired after 2005; Mark Sweeney got past Mota by 75 before his 2008 retirement, not even close to Harris. But remember we’re talking volume alone there.

Harris played eighteen seasons with 883 pinch hit appearances. To call him the greatest pinch hitter of all time requires an imaginative stretch. (Well, so does calling Pete Rose the greatest hitter of all time on the sole basis of 4,256 lifetime hits.) As a matter of fact, when looking at 33 players with 300+ lifetime pinch-hitting plate appearances each, then calculating their Real Batting Averages in the role (total bases + walks + intentional walks + sacrifice flies + hit by pitches, divided by total plate appearances), Harris comes out dead. last.

That was only slightly less shocking than who came out on top of the RBA heap. Relax, folks—Smoky’s still in the top five:

If Lenny Harris’s partisans think they’re shocked to see him at the bottom of the RBA heap, would it be fair to guess a bigger shock from everyone seeing Cliff Johnson at the top?

Old Mets fans can smile broadly seeing old favourites Rusty Staub (ninth) and Ed Kranepool (fifteenth) among the top fifteen. I’m willing to wager that nobody thought number two would be Stairs, right smack in between Johnson and Burgess. Or that Oscar Gamble would nudge ahead of Jerry Lynch, the semi-legendary pinch hitter on the Reds’ 1961 World Series team, for fifth place by nine points.

The bad news may still be that Johnson’s remembered mostly, if at all, for the incident that helped make him an ex-Yankee: his April 1979 locker-room fight with Hall of Fame relief pitcher Goose Gossage. All it took was Gossage kidding Johnson about being unable to hit righthanded pitching and Johnson to shoot back, “I sure could hit you” before giving Gossage a punch Johnson only meant to be playful.

Johnson was “a bruiser who didn’t know his own strength . . . who often, like Lenny in [John Steinbeck’s] Of Mice and Men, hurt people without meaning to,” wrote Bill Madden and Moss Klein of Johnson in Damned Yankees. The playful punch turned into a swing back, a pair of hard pushes, and the torn thumb ligament that knocked Gossage out of action for twelve weeks.

“I knew I was gone,” rued Johnson, who was indeed traded to the Indians in mid-June 1979. “After the thing with Goose, I was an outcast.”

If you believe the intentional walk equals a fear factor, then Ol’ Smoky remains the pincher most likely to strike fear into the hearts of enemy pitchers with his 21, followed by Gross (nineteen) and, in a dead heat, Lynch and Jose Morales (seventeen).

And however low Harris sits on the RBA survey, he still has those record 212 pinch hits to be proud of, however long it took him to nail them. The Panda has a measly 170 to go to catch him.

Decades ago, William Conrad playing Marshal Matt Dillon on radio’s Gunsmoke described his line of work before each episode thus: It’s a chancy job, and it makes a man watchful . . . and a little lonely. Dillon should only have tried pinch hitting. One minute, you might be the man of the hour. The next, you might be handed a message to get out of Dodge—on the stage that left town five minutes ago.

Right now, Sandoval’s the man of the hour. Right now, he’s also the brightest offense on the Braves this side of Ronald Acuna, Jr. Right now, manager Brian Snitker must ponder the wherefores if he could somehow send to the plate a lineup of one Acuna and eight Pandas—when he isn’t reminding himself of the chancy side of Sandoval’s current line of work.

Kung Fu Panda’s RBA as a pinch hitter (149 lifetime appearances and counting) is .597 at this writing. He’s playing in Smoky’s league and beyond. Imagine if he keeps that up over his next 149 pinch hitting calls. He may not be quite in Johnson’s league, but he might  be numero two-o on the survey.

But Johnson held the record for lifetime pinch homers (twenty) until Stairs passed him with 23. A first baseman by original trade, whom the Astros (then in the National League) tried perhaps foolishly to turn into a catcher, Johnson was really a DH type who was more or less wasted by his five and a third early seasons in Houston. He deserves to be remembered for more than the Gossage incident.

So let us remember Johnson as one of Smoky’s Children—who went above and beyond Pop. For as long as he sits there, until Sandoval or someone else passes him, let us remember Hammerin’ Heathcliff as what Real Batting Average calls him. The Crown Prince of Pinch.