This year’s Hall of Fame vote by the Baseball Writers Association of America is troubling, for more reasons than just Curt Schilling falling short by sixteen votes and Schilling’s demand to be removed from the writers’ ballots. Something is wrong, drastically so, with the vote. For the sake of the Hall of Fame, it needs to be fixed. But how?

The answer isn’t simple. But there’s one sub-issue to consider at once: the blank ballots. How many the writers submitted is less relevant than the thought that, perhaps, if you submit a blank ballot, you should lose your Hall vote for a spell.

Voting for the Hall of Fame isn’t exactly a right. The Hall conferred the privilege upon the writers almost a century ago. With privilege comes responsibility, no matter the controversies that do or don’t surround a particular year’s candidates. The responsibility includes the one holding the privilege to do his or her job, think hard, and vote.

If assorted BBWAA members thought it was difficult to impossible to resolve certain questions around certain players while considering their Hall ballots, they don’t always seem to find it too difficult to write magnificent ravings about those questions and players when the occasion arrives.

As a life member of the Internet Baseball Writers Association of America, I cast votes for the IBWAA’s Hall of Fame roll every year since becoming such a life member. Such votes are neither simple, cut, dried, or prenatal surgery. Last November, I voted, citing why I voted for this player or didn’t vote for that player. If a man can do that in what amounts to a symbolic Hall election, surely the BBWAA can do theirs in a real one.

The writers might consider that blank ballots are simply not acceptable regardless of the moment’s controversies. They might also consider that those submitting blank ballots should have their Hall vote privileges suspended. It might convince the blankers to think twice, thrice, as much as it takes.

The Hall of Fame itself should step up, step in, and decide the writers have played enough games for long enough, it’s time to broaden the Hall of Fame vote. You can pick numerous instances if you like, this year and in years past, but perhaps it’s time the BBWAA and the Eras Committees are no longer the only groups privileged to vote for the Hall.

Come to think of it, the former Veterans Committee really put its own foot in it (hardly for the first time) when they enshrined former comimssioner Bud Selig. We should have expected certain ramifications and after-effects, when players indulging actual or alleged performance-enhancing substances pre-testing still tie the BBWAA up in knots but the old Veterans Committee elected the commissioner who let the so-called Wild West Era run wild.

Who else should be invited to vote for the Hall of Fame? I have a few ideas:

Some of them get to be part of assorted sixteen-member Eras Committees, of course, which also include “executives, and veteran media members” according to the Hall itself. We can adjust that: The Hall of Famers should have to choose whether to vote concurrent to the BBWAA or as members of one or another Era Committee considering overlooked/snubbed BBWAA candidates—but not both. 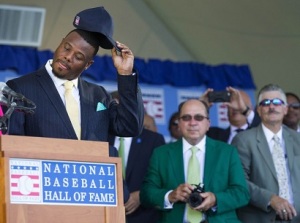 Why shouldn’t such Hall of Famers as Ken Griffey, Jr., Johnny Bench, and Rollie Fingers, among others, have Hall votes?

2) The living Ford C. Frick Award winning broadcasters and those currently working in the broadcast booths. They see as much of the games as the writers do. The Hall would not be disgraced by the like of Marty Brennaman, Chip Caray, Bob Costas, Ray Fosse, Jaime Jarrin, Jim Kaat, Buck Martinez, Tim McCarver, Jon Miller, Vin Scully, Bob Uecker, or Suzyn Waldman, among others, having a vote.

3) The established statistics mavens, since statistics remain the life blood of baseball.  Please tell me you don’t think it would be a travesty for Allen Barra, Bill James, Rob Neyer, or the folks at Baseball Prospectus, Baseball Reference, retrosheet, and The Elias Sports Bureau to be included in the Hall of Fame vote. If much of their work has provoked re-assessments of several subsequent Hall of Famers, they should not be regarded as voting interlopers.

4) Those writers/historians who were never admitted to the BBWAA but who’ve established themselves long and with particular distinctions as blessings to the game. Find us a valid reason for ageless Roger Angell, Peter Golenbock, John Helyar, Donald Honig, Richard Goldstein, George F. Will, or plenty of the fine excavators of the Society for American Baseball Research, just for openers, to be excluded from the Hall vote. You’ll have a simpler time finding Atlantis.

5) Umpires with above-average ratings. (God and His servant Doug Harvey only know you don’t even want to think of bringing Angel Hernandez or Country Joe West into the voting fold.) Those folks had the second-best views of Hall of Fame candidates for themselves. (The first-best is probably a tossup among several.) The best umpires didn’t just call the pitches or the plays, they developed particular appreciation for players who strove for and achieved Hall of Fame-level excellence.

They would not lack credibility as Hall voters if allowed the chance. Should a voting umpire lose his (or her, in due course?) above-average rating, their Hall vote can be suspended for that year.

6) How about the IBWAA? As in, members not concurrent BBWAA members but whom the IBWAA leadership deems by their actual works to be worthy of a Hall of Fame vote to exercise wisely and diligently. (Fair disclosure: I’m not an IBWAA leader or officer yet.) The IBWAA is not just another gaggle of fans ranting our heads off. We’ve got some excellent observers/analysts/commentators among us who have earned the chance.

7) Establish a Pioneer Committee. This would be a group considering and giving due to those people—players, executives, statisticians, others—whom we’d consider to have changed the game profoundly in ways other than how they played or managed or administered the game. (It wouldn’t have let Marvin Miller wait until death did he part for his well-deserved Cooperstown enshrinement, either, if it lived while he did.)

The Pioneer Committee could begin with considering Curt Flood, who kicked the door to free agency open just enough with his reserve clause challenge. And, Andy Messersmith, who shoved the door open all the way by finishing what Flood started and prevailing. And, Tommy John, who enjoyed a long, distinguished second act after undergoing the first of the ligament-replacement elbow surgeries that’s long since borne his name.

They didn’t quite post Hall of Fame playing careers, but they all changed the game profoundly, and irrevocably. There should be a place in the Hall of Fame for all three.

This Pioneer Committee should also consider those such as Allan Roth, arguably the godfather of deep statistics; and, Bill James, who picked up where Roth left off, all but invented sabermetrics, and sired subsequent generations of deeper analysts many of whom came to play key roles in re-developing baseball organisations. If those are unworthy of Hall consideration, remember that my Antarctic beach club has yet to find a buyer.

The BBWAA should also re-consider the ten-vote maximum on the Hall of Fame ballot. The max was imposed in the first place out of concern to do whatever the writers could think to keep those nefarious suspected users of actual or alleged performance-enhancing substance from getting through.

Aside from that jet taking off decades ago (greenies, anyone?), they shot themselves in the foot with the limit. The bullets traveled far enough to delay or torpedo entirely more than a few legitimate Hall of Fame cases thanks among other things to several instances ballot jam. Kenny Lofton surely isn’t the only man wondering why the number ten center fielder ever to play major league baseball can’t be in Cooperstown (pending a future Era Committee consideration) except as a visiting customer.

Raise the ballot max back to fifteen. Maybe that wasn’t perfect, either, but it might return the writers a little more of the proverbial wiggle room to cast thoughtful, reflective votes that, among other things, won’t leave enough of the Loftons as baseball’s wronged men to be done right at some future date if at all.

While they’re at it, they should dump once and for all the prejudice against first-time votes. If you think a player belongs in the Hall of Fame, vote him on the first ballot. You don’t need reminders of how many Hall of Famers you’d assumed Cooperstown locks waited five or more ballots to get their due, or how often you wrote fuming over that very sad fact.

(People still think it’s more than a little surreal, if not insane, that Cy Young, Lefty Grove, Joe DiMaggio, Hank Greenberg, Yogi Berra, Whitey Ford, Craig Biggio, and Vladimir Guerrero aren’t first-ballot Hall of Famers. Even if things worked out well enough for Ford that he got in on his second try, the following year—next to his old running mate Mickey Mantle, on Mantle’s first.)

So why not invite Joe and Jane Fan into the Hall of Fame voting discussion yet? There’s a very good reason not to. They’ve turned All-Star Game voting into ballot box stuffings or gold watch honoraria. (The All-Star Game vote system needs a complete overhaul, but that’s another day’s subject right now.) Do you really want to know how much worse they might make the Hall than did the Today’s Game Committee that decided Cooperstown should be Harold Baines’s gold watch?