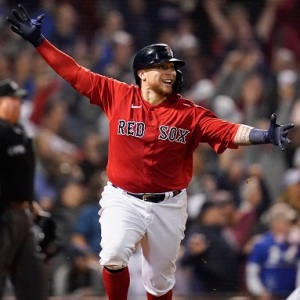 Christian Vazquez’s walk-off bomb should have been the co-story of Game Three with Nick Pivetta’s stout four extra innings’ shutout relief. But no . . .

You could hear the blue-murder screaming even before Christian Vazquez ended American League division series Game Three in the bottom of the thirteenth. You could hear furious Rays fans and sympathisers thinking Game Four deserves no shorter justice than the Red Sox getting killed to death.

They saw Vazquez hit a two-run homer, igniting a berserk celebration around all Fenway Park, and thought to themselves before hollering loud and long, We wuz robbed!!! They probably still think so.

They think the Rays should have come out of the top of the thirteenth with a 5-4 lead, the run scored from first by Yandy Diaz off Kevin Kiermaier’s two-out double against Red Sox reliever Nick Pivetta. That thought would have been wholly reasonable—except for the umpires calling for a rules review, ruling ground-rule double, and thus ruling Diaz back to third base.

The problem was Kiermaier’s drive bounced off the right field wall, off the track, then off Red Sox right fielder Hunter Renfroe and over the wall. Official Rule 5.05(a)(8) spells out the wherefore: If a fair ball not in flight is deflected by a fielder and then goes out of play, the award is two bases from the time of that pitch.

Rule 5.05(a)8 distinguishes between intent and lack of intent. Had Renfroe actually tried and succeeded in deflecting the ball over the wall, Diaz would have been awarded home because he’d passed second base just as the ball ricocheted off Renfroe’s thigh over the wall. But Renfroe never touched the ball with either hand.

Postgame, Kiermaier remained in abject disbelief. “I can’t believe that happened or we don’t get the chance to score right there,” the Rays center fielder said. “For one, I crushed that ball. I was hoping to leave the yard. I got a lot of snap and crackle but no pop. First and foremost, for that to happen right there, it just doesn’t make sense to me.”

Even the Red Sox didn’t know what to think at first.

It made sense to home plate umpire Sam Holbrook after the review mandated the ground-rule double ruling. “Very simple,” the ump said. “From an umpire’s standpoint, very simple textbook in the rule.”

Maybe the rule should be reviewed and changed, maybe it shouldn’t, if you consider intent paramount on a play that was so freakish in the first place. But within its strict letter, lacking verifiable intent on Renfroe’s part, Kiermaier indeed had to settle for the ground rule double and Diaz indeed had to return to third.

The game remained tied at four. Red Sox reliever Nick Pivetta recovered to finish his fourth inning worth of three-hit, no-run, seven-strikeout relief. Rays fans may consider it having added insult to insulting injury when Renfroe himself held on for the full-count walk with one out in the bottom of the thirteenth.

Then Vazquez—who’d only come into the game as a pinch-hitter for his catching predecessor Kevin Plawecki in the sixth—caught hold of Rays reliever Luis Patino’s first offering and sent it into the Monster seats above left center for the 6-4 Red Sox win. If the would-have-been Diaz run had held up, it would have meant the Rays losing by a single run instead of two.

In a game about which it was entirely fair to say it would be a shame for either side to lose, the Rays wrestled back from a 4-2 deficit in the top of the eighth off Red Sox reliever Hansel Robles. Wander Franco hit a 3-1 fastball down the chute for a leadoff homer over the Monster; Randy Arozarena with two outs doubled pinch-runner Manuel Margot home.

Before that, the Rays re-learned how stingy Red Sox starter Nathan Eovaldi can be after he gets touched up in the beginning. Once Austin Meadows parked a one-out two-run homer into the bullpens in the top of the first, Eovaldi went forward to pitch shutout ball the next four-and-a-third innings.

The Red Sox chased Rays starter Drew Rasmussen with three straight singles in the third, including Hernandez sending leadoff singler Christian Arroyo home with the tying run at two. Josh Fleming relieved Rasmussen and Rafael Devers greeted him with an RBI single up the pipe to put the Red Sox up, 3-2.

After Hernandez’s leadoff yank into the Monster seats off Rays reliever Pete Fairbanks to open the fifth, and the Rays tied things at four in the eighth, Game Three’s big story figured to be Pivetta. His stout extra-innings shutout relief reminded observers of Eovaldi’s own bullpen-saving, six innings stout relief in that marathon Game Three of the 2018 World Series.

Pivetta’s outing probably changed Red Sox manager Alex Cora’s plan to start him in Game Four. After Sunday night’s win Cora probably won’t complain too much. He’d said previously that whatever the plan going in the game itself would govern the moves and the changes. When he needed a stopper before the Rays got any more ornery than tying the game at four, he picked the right man for the job.

Don’t blame the ground-rule double for costing the Rays Game Three. The Red Sox led each of the first six innings off with a man reaching base. The Rays’ none-too-shabby lineup struck out twenty times and worked only four walks. They had one hit in nine opportunities with runners in scoring position.

“There’s no, ‘He would have done this, would have done that’,” Holbrook said. “It’s just flat-out in the rule book, it’s a ground-rule double.” Though even Holbrook couldn’t remember having seen any similar play in the quarter century he’s been a major league umpire.

But this was not Don Denkinger absolutely blowing what should have been an out call to start the bottom of the ninth of Game Six, 1985 World Series. A blown call that infuriated those Cardinals so much that, after the Royals forced Game Seven and the umpire rotation placed Denkinger behind the plate for it, the Cardinals imploded almost completely to lose that Series.

These Rays are made of far better stuff than that. These Red Sox know it. The Red Sox now stand on the threshold of going to the American League Championship Series, but they won’t kid themselves that the Rays will be pushovers. Neither should you.