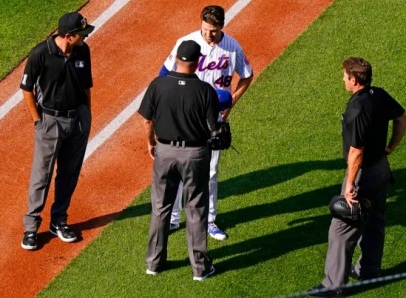 But on Monday afternoon, deGrom was the first to be stopped, stood for inspection, and also ordered to open his belt as though he was a holding-cell suspect about to be placed on suicide watch.

The fact that he beat the Braves in game one of a doubleheader seemed incompetent, irrelevant, and immaterial.

Welcome to Day One of the Show’s official crackdown on that new-fashioned medicated goo. Purely by an accident of timing, deGrom’s Mets were due to host the Braves in the first of Monday’s games. Purely by the same accident, deGrom himself had the dubious honour of first come, first frisked.

It almost seemed a by-the-way kind of thing when the tall righthander spent the rest of his working hours deGromming as usual. He struck six Braves out in five innings, surrendered one two-out double in the fifth inning that was good enough to let him lure Pablo Sandoval, that early-season pinch-hitting sensation, into a pop out to third for the side.

While he was at it, deGrom speared a leadoff line drive back up the pipe in the third with a swipe of his glove that looked so effortless he might as well have been swatting a pestiferous fly.

It makes you wonder how insect repellant escaped entry on baseball’s contraband list.

“I’m only surprised the umps didn’t think about having his glove checked for Krazy Glue right then and there,” said my friend Kenny Keystone, long-retired sub-minor league infielder, who rang my cell phone right off—well, I can’t say the hook with a cell phone, can I?

Kenny blew up my phone the moment home plate umpire Ben May flagged deGrom down as he strode off the mound after punching two out of three Braves out in the first.

“You seeing this?” he hollered wildly.

“Easy,” I said as the frisking began. “How many times has baseball government threatened a crackdown on this, that, or the other thing? How many times have those crackdowns amounted to, ‘If we catch you doing that again, we’re going to be . . . very, very angry at you’?”

There it was. DeGrom strode off the mound, and May flagged him down. It looked at first as though May tossed the last ball deGrom pitched in the inning to either one side or to third base umpire and crew chief Ron (Mea) Kulpa, whichever came first.

May said something illegible to lip readers watching on television. DeGrom waved his right arm away, flashing the kind of grin that in another time and another place might have been the grin of a guy whose well-timed hotfoot was about to explode right up the victim’s heel—not to mention his Achilles tendon and his calf.

Then Kulpa arrived. “Never mind the dental work, buster,” he seemed to say, “hand over the glove.”

Kulpa had his back on the camera view, but we’ll give him the benefit of the doubt that too many indignant fans wouldn’t know the meaning of when real cheaters get caught on the spot and then cuffed and stuffed. He inspected deGrom’s glove almost as though he’d found the tape that fell off the lock at the Watergate.

The only thing missing was the Citi Field P.A. people cuing up and playing the famous theme from The Pink Panther.

“Glove, hat, and belt,” is what turned out to be the instructions to deGrom from the men in blue-black and gray. In the moment, if you weren’t in the ballpark, a half educated guess might have the exchange like this as deGrom handed his gear over:

Kulpa: Don’t tempt me to say you had nothing upstairs.

DeGrom: You’d have laughed your head off saying it.

Kulpa: Then you’d have been tempted to throw one at me upstairs!

DeGrom: Where it has plenty of room to bounce around?

I did say half educated. DeGrom’s not one of those guys who’s going to let a little thing like baseball’s government imposing and enforcing on-the-spot inspections and searches kill the mood.

For all anybody knows, behind that prankish looking grin of his deGrom was humming the theme to CSI: Crime Scene Investigation: “Who are you? Who? Who? Who? Who?”

Next, Kulpa moved a little to his right. Then, deGrom moved his right hand to the front of his almost non-existent stomach. And the next thing anybody saw, deGrom loosened his belt.

“Are you seeing that?” Kenny whooped. “Why the hell don’t they just have him drop his drawers right then and there while they’re at it?”

At the same moment, May moved left and deGrom had his hat back. After re-fastening his belt and accepting his glove back, too, deGrom moved to his own left, toward the dugout, and never once stopped grinning big and wide—except when he was laughing his own not-so-fool head off.

I had to laugh, too.

“Kenny,” I said, “You know better than me that if they drop his drawers there, it’s going to be tough to decide which is worse—the umps strip-searching a player right there on the field, or that Citi Field audience going you-know-what-shit nuts. And nobody will be able to tell if they’re going you-know-what-shit nuts because of the outrage of the strip search or because the women in the park think deGrom’s got the best legs in baseball.”

“If they were gonna frisk him and search him,” Kenny replied, “why the hell didn’t they just march him into the dugout, move him up against the wall, and pat him down the old fashioned way?”

“Because they were making history, too.”

“Purely by an accident of timing,” I said, “deGrom’s the first pitcher to get searched for syrup, stickum, SpiderTack, or other kinds of blends we don’t even know were invented yet. Even if half of baseball world thinks half or better of the pitchers out there today spend as much time in their private laboratories as watching the videos of their most recent pitching turns.”

“Well,” I said, “May and Kulpa have become the first umpires to perform searches for syrup, stickum, SpiderTack, and other kinds of blends we don’t even know were invented yet.”

“Who cares about those guys” Kenny asked indignantly.

“I’ll name you two,” I said. “I’m willing to bet half deGrom’s salary that Joe West and Angel Hernandez are steaming mad because the Elysian Fields gods couldn’t bring themselves to arrange it so that one of them would be the first to approach some pitcher with a search warrant.”

By then it was about as funny as a strip search warrant for a nudist colony. And who cared about them, anyway? They didn’t get to make history. The guy with the 0.50 ERA on the season after his day’s work was done did. He passed inspection with flying colours. Who says deGrom isn’t leading a charmed life this season?

“You can’t bet half deGrom’s salary,” Kenny shot back.

“I’m coming to Vegas on the morning plane,” he said. “I’ve got two words for you and I’m saying them to your face.”

“And what might those two words happen to be?”