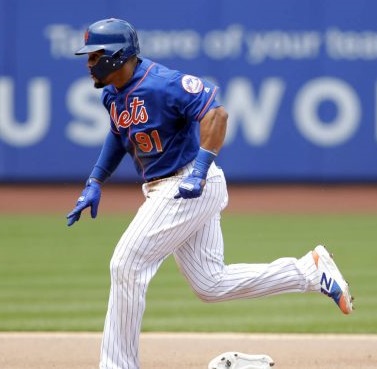 Usually, you come out of your shoe swinging hard. Carlos Gomez came out of his running hard enough—stealing second in the fifth, before hitting the three-run homer that bailed his manager out.

Leave it to Mickey Callaway to go from two steps from the electric chair to three games worth of resembling a craftsman to tripping over his own sensible change of mind in one harsh top of the eighth. Here was the perfect opportunity to send Edwin Diaz out for one of those four-out saves Callaway formerly quaked over asking, until he either saw the light or felt the heat when his execution seemed nigh.

Diaz wasn’t seen anywhere near a warmup mound in the Mets bullpen, though Tyler Bashlor and Ryan O’Rourke were. Bloody good thing for Callaway that Carlos Gomez bailed him out with a three-run homer. He’d have had a lot of splainin’ to do otherwise.

You guessed it. That’s when Diaz was ordered up and throwing. You take your victories when you can get them, of course, but Callaway didn’t have to make it this hard on himself or his Mets, even though the 6-4 win did consummate a sweep against even the hapless Nats on which nobody would have bet after last weekend’s Miami disaster.

Two outs, Nationals on second and third, Robert Gsellman already having allowed the Nats to cut a hard-pried Mets lead of 3-1 down to a single run. That was after he opened the inning nailing Howie Kendrick on a check-swing strikeout that got both Kendrick and Nats manager Dave Martinez tossed for arguing. So far, so good.

But Diaz wasn’t seen on either warmup mound in the Mets bullpen, though Tyler Bashlor and Ryan O’Rourke were. And Gerardo Parra, pinch hitting for Nats starter Stephen Strasburg, was checking in at the plate. The good news was Gsellman starting Parra in the hole 0-2. The bad news was, after missing with a curve ball and a changeup and a weak foul off, Parra shooting a base hit to right center to overthrow the Mets lead.

Then Gsellman struck out Trea Turner for the side, after the Mets’ possibility of sweeping the otherwise hapless Nats suddenly hovered above an alligator pit. And Diaz still wasn’t seen warming up until the Mets opened the bottom of the eighth with pinch hitter Dominic Smith’s leadoff double.

So at minimum Callaway figured now to bring him in in a re-tied game. Assuming it would be re-tied, after Nats reliever Wander Suero dialed his inner Mariano Rivera and, feeding Todd Frazier and Pete Alonso a diet of cutters, back-to-back strikeouts.

But the Nats inexplicably elected to put Mets catcher Wilson Ramos aboard first. Unless they thought Ramos couldn’t possibly account for a second Met run behind Smith on any base hit, since Ramos runs at paraplegic speed, the move made no sense. It made even less sense when Gomez fell behind 1-2, with Suero continuing to serve up the same strictly cutter diet, before Suero served a cutter that didn’t cut and Gomez sent it on a high line over the left field fence.

Then Callaway brought Diaz in for the conventional ninth-inning save opportunity. First, Diaz struck out Adam Eaton. Then Nats third baseman Anthony Rendon channeled his inner Robinson Cano, sort of, nicking one in front of the plate fair and standing frozen as Ramos picked up the ball fair and tagged him. Then Diaz fought Matt Adams to a tenth pitch and struck him out swinging on a pitch that dove so low a golfer couldn’t have gotten a driver onto it.

Strasburg and Mets starter Steven Matz dueled peculiarly enough. The Mets pried only one run out of Strasburg with a fifth-inning sacrifice fly, but the Nats shoved Matz into and out of trouble with ten hits and nothing to show for them than a sixth-inning run, scoring on a bunt single by Brian Dozier and an error of styling by Mets second baseman Adeiny Hechavarria on a throw, allowing Juan Soto—who missed the cycle by a homer on the day—to score it.

(For those scoring at home, the Mets have been the victims of only three cycles in their entire history, with only one of those three coming at home, in 1965 in Shea Stadium. The last two—to Ray Lankford and Hall of Famer Vladimir Guerrero—came in those players’ home playpens.)

Somehow, the Nats spent the day going 3-for-14 with men on second or farther to the Mets’ going 2-for-6 likewise. The Nats went 6-for-33 in that situation over all four games. Matz and company Thursday only completed the Nats looking guilty of first-degree desertion.

And somehow, Gsellman—who saw his fifteen-inning scoreless streak evaporate with two bad pitches, a fastball down the chute to Parra and a sinker that sank about as much as a 747 on takeoff to Soto—came out alive and with credit for a win. Still believe in the irrevocable supremacy of pitching wins? Explain how Gsellman barfed a Met lead into a Met deficit and won the game.

Oh, yes. Gomez provided all the explanation you needed in the bottom of the eighth. Lucky for Gsellman. And, lucky for Callaway.

For the moment, Gomez—who hadn’t hit one out in a Met uniform in twelve years—made Callaway resemble Hall of Fame manager Earl Weaver. (“The key to winning baseball games,” Weaver liked to say, “is pitching, fundamentals, and three run homers.”) The skipper could look worse, and too often he has.

But what happens the next time the Mets might be in need of a four-out save? Maybe it’s best not to ask just yet. The finish wasn’t quite as pretty as the rest of the series but let the Mets enjoy this sweep. The Nats’ Lucys got a lot more splainin’ to do after this one.