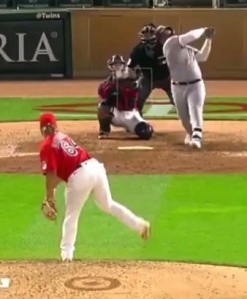 Hitting this home run on a 3-0 count in the ninth in Target Field got Yermin Mercedes a target on his back in May—placed by his own manager.

Somewhere among the legion of September call-ups this year, there was one missing conspicuously from the now American League Central champion White Sox. A fellow having a splendid time of things overall at Charlotte (AAA-East), considering he’s a catcher at a somewhat advanced age. A fellow who exploded out of the box in the Show this year but ran into an unforgivable hiccup near the end of May.

The hiccup wasn’t his, but his manager’s.

Yermin Mercedes’s 2021 in Charlotte was respectable enough to finish with a .782 OPS, a .502 real batting average (RBA: total bases + walks + intentional walks + sacrifice flies + hit by pitches, divided by total plate appearances), but a September snub and a likely absence from the White Sox’s postseason roster.

It may or may not be because he stumbled a moment after his manager threw him under the proverbial bus in May, for reasons described most kindly as brain damaged. In a season during which there were controversies politely called dumb, this one may yet confer upon Tony La Russa the Ignoble Prize for Extinguished Achievement.

But it defies baseball sense that Mercedes shouldn’t earn another shot with the White Sox while they carry one backup to Yasmani Grandal who carries a .616 OPS. and isn’t exactly a run-stifler defensively.

Mercedes hit the road swinging right out of spring training, going 8-for-8 right through the sixth inning of a game against the Angels. He was the only Show player since 1900 to open a season that way. It looked as though his only flaw was that, unlike the cars with whom he shares a marque, he can’t go 0-60 in three seconds flat.

But then came that fine May day when Mercedes checked in at the plate in the ninth inning  against a Twins position player on the mound, first baseman Willians Astudillo. Yes, the White Sox were blowing the Twins out, 15-4. But, yes, the Twins still had five legitimate relief pitchers available for duty.

Astudillo threw Mercedes yet another meatball, on a 3-0 count, and watched it sail over the center field fence. So did La Russa, who turned out to be distinctly unamused at his own player. Mercedes had just broken one of the Sacred Unwritten Rules, and the Hall of Fame manager considered him a heretic with No Respect for the Game.

La Russa probably swore he gave Mercedes a take sign on 3-0, though CBS Sports’ Matt Snyder was hardly the only one who thought that might have been either disingenuous or downright false. If true, Snyder wrote, it’s worth a stern talk—in the dugout, in the clubhouse office, anywhere except in the press where La Russa took it.

“I heard [Mercedes] said something like, ‘I play my game’,” La Russa was quoted as saying. “No he doesn’t. He plays the game of Major League Baseball, respects the game, respects the opponents.”

Oh. As though the opponent showed so much respect for the game that they simply rolled over, played dead, and sent a first baseman/catcher to the mound to pitch an inning, even the ninth? We’re supposed to respect an opponent when they all but tank the rest of the game?

(Don’t even think about telling anyone you can’t possibly overcome a 15-4 deficit. The 1925 Philadelphia Athletics would love to prove you wrong. After closing twelve-run deficits twice in a game against the Indians, they closed an eleven-run deficit in the eighth and went on to win, 17-15. They upheld Berra’s Law [it ain’t over until it’s over] decades before Yogi gave it a formula.)

The following day, Twins relief pitcher Tyler Duffey threw behind Mercedes the moment after coming into the game. La Russa said in the press he had no trouble at all with Duffey doing that. His pitcher (and Cy Young Award conversation member) Lance Lynn demurred: “The way I see it, if a position player is on the mound, there are no rules. And if you have a problem with whatever happened, then put a pitcher out there.”

One up for Sir Lancelot. Perhaps Lynn was somewhat amazed that a skipper who admitted a fortnight earlier that he didn’t know the written rules could now be called a strict constructionist about the unwritten ones.

For all anyone knows, the La Russa-inflated dustup with the Twins knocked more than a little air out of Mercedes, who finished May with a .311/.366/.480 slash line, fell to .271/.328/.404 by the end of June, and was sent down to Charlotte. The frustrated Mercedes first threatened retirement, then reported to Charlotte after all.

Who’s to say La Russa’s foolish mishandling of that 3-0 home run, to say nothing of all but encouraging the Twins or anyone else to throw at his batters if they swing on 3-0 against a position player on the mound, didn’t deflate Mercedes inside no matter how he tried not to let it show?

Exhumed from retirement, La Russa’s Hall of Fame resume of thirteen division championships, six pennants, and three World Series rings, I wrote after the 3-0 homer, “won’t save him, if he costs himself his clubhouse and the White Sox turn from early-season surprise to season-closing bust.”

Well, the White Sox didn’t exactly turn from early-season surprise to regular-season closing bust. They were fun to watch as often as not, particularly playing and winning the Field of Dreams Game against the Yankees in mid-August. (“Hey, Dad—want to pitch me a walk-off?”)

They didn’t exactly overwhelm an American League Central that has underwhelmed just about all season long, either. This wasn’t entirely their fault. It’s not easy to lose impact players or significant pitchers to injuries for varied lengths of time. It’s also not easy to play the game with the occasional but nagging suspicion that your manager can hang you out to dry at any moment, for any reason, even (especially?) a foolish reason.

They’d lost eight of eighteen before opening a Thursday doubleheader with a 7-2 win over the Indians in Cleveland. Their .561 winning percentage entering today is lower than last year’s short-season .583.

It doesn’t get all that much better from there. They’ve been a .500 team since the All-Star break. They entered that Cleveland set Thursday with a 25-29 record against all .500-or-better teams. They’ve swept only one season series this year—all seven against the .323-winning Orioles. They may or may not have surprises in store for their likely round-one postseason opponent—the Astros, who took their season series against each other 7-2.

La Russa hasn’t always resembled the genius he’s cracked up to be, still. Oh, he was about as clever and attentive as he could be in keeping his oft-wounded charges from dissembling even in a weak division. La Russa and his White Sox endured where others haven’t after the injury bugs became a plague.

But look to the unwisely missing backstop among their reserves. To his credit, La Russa offered Mercedes a show of support—last month, at a time Mercedes pondered aloud whether his next baseball stop might be in Japan. It took La Russa a mere four months to pull him back out from under that bus.

“As you probably know, if you are paying attention, several times he said how close we are,” La Russa said then. “He knows I’m a supporter of his. So I’ll reach out to him and see what’s going on. It could be he’s just feeling frustrated. I’ll try to explain to him he’s got a big league future.”

Four months after La Russa treated his Mercedes like a rustbucket Trabant, that might be a bit of a tough sell.