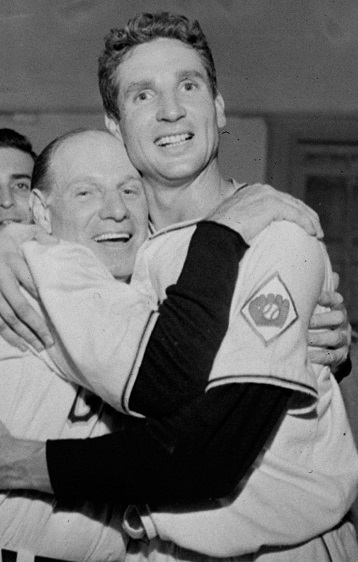 Leo Durocher (left, with Bobby Thomson)—his spyglass-and-buzzer sign-stealing operation in the 1951 pennant race was a precursor to the high-tech espionage baseball now wants to try stopping.

“This is a simple game,” fictitious Durham Bulls manager Skip Riggins huffs at his stumbling players in Bull Durham, after jolting them following yet another loss by heaving a pile of bats onto the communal team shower floor. “You throw the ball, you hit the ball, you catch the ball.”

It’s so simple that assorted major league people sometimes do everything they can think of to out-wit the other guys, even with complicated gadgetry and a taste for larceny. And we don’t mean the basepath kind of larceny that earned Hall of Famer Rickey Henderson his nickname The Man of Steal.

High technology has its place in baseball, but it should also have its limits. So says commissioner Rob Manfred about new restrictions aimed at taking a big byte out of baseball espionage. Manfred thinks the new rules will help speed up games. They just might, but that’s not half as important as further ensuring games are played with pixelated pilferage kept less than minimal. If only.

Let’s be real. Cheating is probably professional sports’ oldest profession. Performers have sought every last edge about as long as they’ve sought the perfect swing, the best pitch, the most effective slide, the least penetrable game strategy. Enough of them have been willing to cross the line between mere gamesmanship and somewhat organised crime.

Baseball government will now ban non-broadcasting field cameras between the foul poles and squeeze in-house video. Boys will be boys, but Manfred thinks high-tech sign stealing got so prevalent last season that teams worried as much about playing Spy vs. Spy as they worried about playing baseball.

Sports Illustrated‘s Tom Verducci says six teams were believed to be using center field in-house cameras aiming at catchers’ signs while “several other teams were under heavy suspicion. The sign stealing forced most teams to adopt multiple sets of signs even with the bases empty. Those signs were changed often, even within at-bats, which slowed the pace of play.”

Baseball already had a rule that you couldn’t steal signs from the dugout, the bullpens, or anywhere else that didn’t involve second base and a baserunner, or even the coaching lines. The new regs are aimed at cracking down on baseball’s version of cybercrime. Leo Durocher, call your office, wherever you are.

This isn’t the 1950s Phillies grounds crew sculpting the third base line into an incline to keep Hall of Famer Richie Ashburn’s deft bunts from going foul and, ahem, robbing him of infield hits. This isn’t the Giants’ grounds crew re-wetting the infield dirt but turning the first base area into a swamp to keep Maury Wills from stealing more bases than he already was against them. This isn’t even Graig Nettles doctoring a bat by loading the barrel with mini-Super Balls, or Mudcat Grant getting away with a soap ball until he overloaded the stuff inside of his road jersey and the warmth of the sun foamed it too visibly through the gray.

At the turn of the 20th Century the Phillies were caught red-handed in a sign-stealing operation, or maybe that should be jelly-legged: third base coach Pearce Chiles had a jiggling tic in his leg on the coaching lines that the Reds finally noticed he had only during Phillies home games. Reds shortstop Tommy Corcoran finally couldn’t take it anymore and went to start kicking at the coaching box until he struck a vein—a box full of wires that buzzed Chiles with stolen signs he could relay to his batters.

Durocher saw and raised the Phillies in mid-1951, when he discovered a recent Giants acquisition, reserve infielder Hank Schenz, owned a Wollensak spyglass he’d acquired during his World War II service and once used while perched inside Wrigley Field’s scoreboard behind the bleachers to steal signs for his then-fellow Cubs.

The Lip deployed coach Herman Franks to the offices above the back of the Polo Grounds’ deep center field, between the clubhouses, where Franks would train the Wollensak upon the catcher and then tap a buzzer picked up in the Giants’ bullpen, signaling reserve catcher Sal Yvars the signs to relay to Giants hitters. 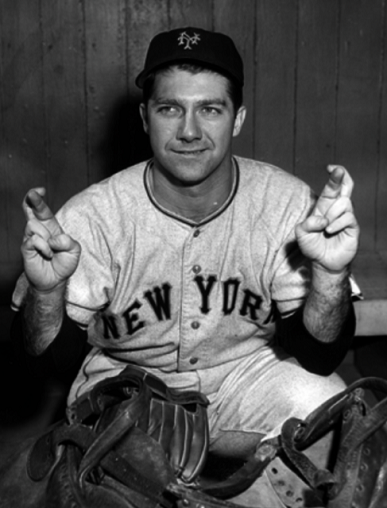 That scheme began when the Giants were thirteen games behind the first place Dodgers in the pennant race. Durocher audaciously asked his Giants whom among them wanted some stolen signs. Half the team actually did. (When Hall of Famer Monte Irvin refused to take them, Durocher thought he was out of his mind.) The Giants were a solid team in the first half, going 44-36 before Durocher initiated his espionage plan; they shot the lights out in the second half (54-23), including a sixteen-game winning streak, and their 40-14 record in August and September bested the Dodgers’ 33-26 in those months to force the pennant playoff.

The Dodgers actually smelled the proverbial rat early on. Cookie Lavagetto, a World Series hero turned coach for the Dodgers, later remembered the Dodgers so suspected the Giants were up to no good that they brought binoculars into the dugout to try catching the Giants in the act, until an umpire saw and confiscated them.

“Why, it would be unfair for the victims to use binoculars to expose the telescopic cheaters!” snorted Thomas Boswell, reviewing Joshua Prager’s in-depth exposure of the plot in The Echoing Green: The Untold Story of Ralph Branca, Bobby Thomson, and the Shot Heard ‘Round the World.

Ralph Branca had Durocher’s sign-stealing operation confirmed to him by a former Giant when they ended up teammates with the Tigers later in the 1950s. Carrying the infamy of surrendering Bobby Thomson’s pennant winning home run with uncommon grace, Branca went to his grave unable to bring himself to fault Thomson, who swore he refused to take even one stolen sign during the playoff.

Exposing the plot once and for all soiled the sweet friendship Branca and Thomson built over the years that followed (“I lost a ballgame, but I gained a friend,” Branca often said) in the final decade of Thomson’s life. (Branca died in 2016.) But Branca blamed Durocher and his immediate accomplices, Franks and Yvars, far more directly for the Mugging at Coogan’s Bluff.

As if to prove that crime didn’t pay, after all, the Giants and their soiled pennant lost the World Series to the Yankees in six games, including two losses in the Polo Grounds, one of which was a 13-1 Game Five blowout. Durocher didn’t live to see himself elected to the Hall of Fame. It’s to wonder whether his signature moment as a major league manager (he managed thirty seasons all told, but won only three pennants and one World Series), that 1951 pennant race comeback and playoff triumph, should now argue for his removal.

The new regulations will also restrict live broadcast feeds to those provided each team’s replay official, using specially trained monitors. Verducci also says the new regs will also send game broadcasts to the bullpens and clubhouses on eight-second delays, bar monitors from tunnels and clubhouses, and require teams to audit every in-house camera, its purpose, its wiring, and where it can be viewed. Good luck.

Baseball government expects the new regs to come into final form in time to begin this season, after teams review and offer comments. But the game will always have its Houdinis and gangsters. (Not to mention spies in the seats, wielding anything from binoculars to cell phones.) They may even have to go back to the future, with buzzers and handheld spyglasses and blinkers, to continue their lives of crime.

And maybe Hank Schenz should be awarded a retroactive National League Most Valuable Player award.