Hall of Famer Phil Niekro, pitching for the Braves in Wrigley Field.

When Lou Piniella first managed the Yankees in 1986, he was handed an order in spring training that he didn’t want to obey. Owner George Steinbrenner convened a meeting of Piniella and his coaches plus others in the Yankee high command to discuss final roster cuts.

The name Phil Niekro came up. The vote was 11-1 in favour of keeping Niekro, who’d electrified both the Yankees and Toronto Blue Jays fans when he landed his 300th career pitching win with a season-ending, 8-0, complete game shutout in October 1985. The only thing amiss was Niekro not landing it for the Braves with whom he’d been a fixture for two decades.

Then The Boss asked his son, Hank, “What do you say?” The younger Steinbrenner might as well have said, “Off with his head,” because his father said, “I agree. That makes the vote 12-11.” Rather conveniently handing himself ten votes. As he would in due course arguing with many an umpire, Piniella exploded.

“What are you even bothering to ask our opinion for? You know what you’re gonna do anyway.” Then Piniella made the long walk to the spring clubhouse, called Niekro in, and told him with the utmost reluctance that he was being released.

“Piniella’s anger over having to release Niekro was understandable,” wrote Bill Madden and Moss Klein in Damned Yankees, from whence the story of the execution springs. “There was no finer person to pass through the Yankees in the ’77-to-’89 period than ‘Father Time’.” (The writers covering the Yankees referred to Niekro that way, affectionately.)

The amiable Ohioan with the knuckleball that inspired some of baseball’s finest wisecracks, and the personality and presence that made you feel he was liable to invite you to a barbeque at any moment, lost a battle against cancer at 81 on Saturday night.

That makes it seven Hall of Famers going to the Elysian Fields this cursed year, including one hell of a pitching rotation if you think about it. Niekro, Whitey Ford, Bob Gibson, and Tom Seaver. How many pennants could you win if your rotation was Knucksie, the Chairman of the Board, Hoot, and The Franchise?

The seven set a record they’d surely rather not have set. Their deaths made 2020 a record year for Hall of Fame passings. If the Modern Era Committee elects the late Dick Allen when it meets in 2021, it’ll make for eight. (Allen died earlier this month.) Not nice.

I couldn’t resist looking it up and then imagining Allen giving Niekro a little good-natured grief upon their Elysian reunion. Allen faced Niekro 65 times, picked up nine hits including a double and a home run, walked nine times, but struck out fourteen times. Making the slash line .161/.277/.268.

“Trying to hit Phil Niekro,” Bobby Murcer once said, “is like trying to eat Jell-O with chopsticks.”  “It actually giggles at you as it goes by,” said another outfielder, Rick Monday, which may have been more appropriate considering Niekro’s birth on April Fool’s Day in 1939. Said longtime catcher Bob Boone, who only ever had to try hitting the Niekro knuckler, “There were times I needed a tennis racquet to hit him.”

Trying to catch Niekro’s signature pitch may have made trying to hit it child’s play. “Catching Niekro’s knuckleball was great,” cracked Bob Uecker, Niekro’s flaky Atlanta Braves catcher. “I got to meet a lot of important people. They all sat behind home plate.”

Dale Murphy started his major league career as a catcher before he moved to the outfield. As a rookie behind the plate he had the signature honour of catching what threatened to be a no-hitter by Niekro against the Big Red Machine, until Cesar Geronimo managed to float a shuttlecock into left in the ninth.

“We had one out in the ninth, and I mean, I was scared to death,” said Murphy to The Athletic’s David O’Brien. “I mean, I’m trying to keep that ball in front of me. I don’t know what I’m calling. He had said, ‘Just give me a knuckleball sign every pitch; I’ll shake you off if I don’t want to throw it.’ And we ended up with a no-hitter until one out in the ninth, and then Geronimo dunked one in, just flared one over [Jerry] Royster’s head at third base.”

Rarely at a loss, Niekro once remembered Uecker giving him sound counsel early in his Braves career. “Ueck told me if I was ever going to be a winner,” Knucksie once said, “to throw the knuckleball at all times and he would try to catch it. I led the league in ERA and he led the league in passed balls.” That would have been 1967, when Niekro led the entire Show with a Koufaxian 1.87 ERA and wasn’t even a topic in the National League’s Cy Young Award voting.

Throwing a pitch that places minimal strain at worst on the arm and shoulder, Niekro pitched major league baseball from Lyndon Johnson’s through Ronald Reagan’s presidencies, until he was 48 and the Braves—surely in tribute to the man as well as the pitcher—brought him back to let him suit up for one more start before he finally retired.

The un-straining knuckleball allowed Niekro to pitch 5,404 major league innings. The only pitchers who threw more were Hall of Famers Cy Young, Pud Galvin, and Walter Johnson. No pitcher since the dead ball era spent as much time as Niekro did on a major league mound. No knuckleballer struck out as many as Niekro’s 3,342.

Yet there was always the sense that, no matter how good and successful he was, no matter how he endured pitching long and well for teams that weren’t always as good as he was, Niekro was baseball’s Rodney Dangerfield, getting no respect, because he threw a pitch that was tough to master but still seen somehow as a gimmick. “Niekro wasn’t looking to master it,” says another Athletic writer, Joe Posnanski. “It was more like he and the knuckleball were friends.”

“I’ll tell you,” Niekro once told an interviewer, “I’ve been asked that question lots of times, you know, why does a knuckleball does what it does, and what makes it do it, and I have no idea.” It was also more like Niekro and baseball were kindred. The kid from Ohio whose coal-mining father taught the knuckleball to him and his late younger brother, Joe, really did seem as though you’d have to tear the uniform off him at last. 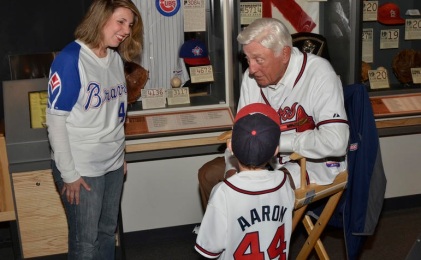 As a 1964 rookie Niekro’s teammates included Spahn. When he got his wish to throw his last major league pitch as a Brave, his teammates included a rookie lefthander bound for Cooperstown likewise. Tom Glavine joked to O’Brien that he saw Niekro and thought for one moment he’d mixed up his own schedule and arrived at a fantasy camp.

Glavine was only kidding. “It was fun to watch. I mean, look, we all knew Knucksie and what he was and how much he loved being a Brave,” he told O’Brien.

That was a big deal for him to be able to end his career as a Brave. At the time I may not have understood it, but getting to know Knucksie as I did in the years after that, and certainly these last few years in the Hall of Fame, I understand why it was important to him. It was a neat thing to be able to watch him go out there and do that, and kind of have that closure.

Many players following the greats on their teams call them mentors. Niekro didn’t just make disciples, he made friends.

“You were a great example for what athletes should aspire to be,” tweeted former Braves infielder Brian Jordan. “Phil had a huge heart to bring joy to others. He cared so much for kids and had a fantastic foundation. Continue to bring the joy in heaven my friend.”

“[H]eartbroken!” tweeted incumbent Braves first baseman and National League Most Valuable Player Freddie Freeman. “An amazing pitcher but an even better man! Thank you Phil for all the laughs and wonderful memories over the years!”

“Phil was a man with a perpetual smile and always overflowing with jokes and nice things to say,” wrote pitcher Mike Soroka on his Instagram page. “I will miss seeing him around the stadium as well as getting calls from him after games.”

“[I]n a world where athletes, celebrity, however you want to deem it, there’s always going to be somebody that just doesn’t like you,” Glavine said. “And I never heard anybody say anything like that about Knucksie. And the people who were privileged to know him — I mean, really know him — understand why.”

The Silver Bullets folded in 1997, after the Coors breweries ended their sponsorship of the team, but their skipper gave them their due when—with most of the Bullets present—he saluted them during his Hall of Fame induction speech.

Phil Niekro, not long after the Braves moved from Milwaukee to Atlanta. (Atlanta Braves photo.)

Niekro also served on the board of directors of Kiz Toys, a Georgia toymaker whom Niekro advised closely on the making and selling of its KizSport line of baseball toys and equipment. He also hosted an annual Ohio Valley golf tournament that raised funds for the high school for whom he pitched, Bridgeport High School. He lost only once as a high school pitcher—when a kid from Tiltonsville High named Bill Mazeroski hit one out.

Eons ago, Braves manager Brian Snitker caught a spring training bullpen session for Niekro. Snitker never got anywhere near the Show as a player but he made a lifelong friend in the genial knuckleballer. He told O’Brien Niekro’s least favourite topic of conversation was his health or himself.

“He’d never let on if anything was bad, that’s for sure,” Snitker said. “He’d always call, and I’d always tell the guys, the coaches and everybody, ‘Knucksie’s calling and just checking on everybody.’ I said there wasn’t a bigger Braves fan in the world than Phil Niekro . . . Knucksie, he was a big fan of them guys (the current players) and us and everybody. He was an awesome, awesome man. I’ve never seen a guy that sucked the life out of every day like that guy did.”

Niekro’s reputation for geniality even extended to fans. Stories abound of Niekro meeting fans at the ballpark, at various team events, and even away from the park, and talking to them as if they were his long-lost friends.

The coronavirus pandemic put the brakes on Niekro’s presence with the Braves this year, but it didn’t keep him isolated entirely. Snitker said Niekro would call him every few days to check in on him and the team. Previously, Niekro would bring his wife, Nancy, and their grandchildren to the Braves’ facilities where he’d also pitch batting practise. “If you needed help,” Snitker said, “all you’d have to do is call, and Knucksie would be there, loving it.”

Niekro thought himself a caretaker of a game that belonged to everyone beyond those who play and administer it. “This is America. America is baseball,” he said during his Hall induction speech, pointing to the Cooperstown crowd as the only player inducted in 1997. “This game is owned and it belongs to you. The fan. Cherish it and take care of it.”

Nancy Niekro was a young flight attendant when she first caught her husband’s eye, while he boarded his first flight as a member of the Braves organisation. Niekro told a teammate that so help him he’d marry her soon enough.

He did. They raised three sons together, and became grandparents twice. She, their sons, and their grandchildren lost something even more precious than baseball lost, when Niekro died in his sleep Saturday night. It was as gentle a passing as you could ask for a cancer-stricken man who made life a playground. Surely the Lord welcomed home not just a great pitcher but a better friend.