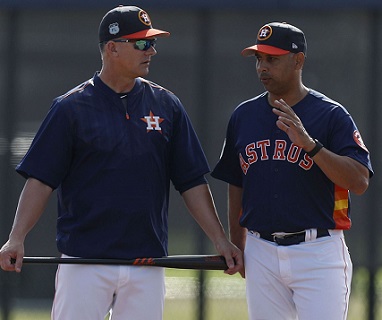 With everything else buffeting major league baseball before delayed “summer camp” and the truncated season, it was easy enough to miss. But Alex Cora—considered an Astro Intelligence Agency co-mastermind and unproven shepherd of the Red Sox Replay Room Reconnaissance Ring—spoke out in June.

And Los Angeles Dodgers pitcher Joe Kelly, one of Cora’s Red Sox charges during their run to the World Series title in 2018, spoke up likewise in a podcast by Dodger teammate Ross Stripling days before his suspension—for throwing at Alex Bregman and Carlos Correa, the latter drawing Astros and Dodgers alike out of dugouts in social-distance violation—was cut from eight to five games.

Between them comes an alteration of the former Astrogate narrative, and it’s not likely to mitigate the AIA stain on the 2017 world champions. If anything, it’s liable to make the stain deeper. Upon the 2017-18 Astros’ players and upon commissioner Rob Manfred, who handed those players blanket immunity in return for spilling about the AIA’s off-field-based, electronic pitch sign espionage.

“The people who took the fall for what happened is nonsense. Yes, everyone is involved,” said Kelly aboard Stripling’s podcast.

But the way [the AIA] was run over there was not from coaching staff . . . They’re not the head boss in charge of that thing. It’s the players. So now the players get the immunity, and all they do is go snitch like a little bitch, and they don’t have to get fined, they don’t have to lose games.

Kelly’s remarks hark among others to Cora telling ESPN writer Marly Rivera in early June that he didn’t object to shouldering his own responsibility for the 2017 Astros’ chicaneries, having been their bench coach before becoming the Red Sox’s manager, but also wanting one and all to know that neither himself nor 2017 Astros designated hitter Carlos Beltran were the sole drivers.

When Manfred dropped his Astrogate hammer earlier this year, he fined owner Jim Crane the maximum-allowable $5 million, virtual tip money. He suspended general manager Jeff Luhnow and manager A.J. Hinch for all 2020. Crane fired the pair almost at once.

“When you take someone’s livelihood . . . to save your own ass, that’s what I don’t like,” Kelly continued.

Cheating? They cheated. Everyone knows they’re cheaters. They know they’re cheaters. It’s over. That’s done with. But now they mess it up by ruining other people’s lives, so they [screwed] it up twice . . . When you taint someone’s name to save your own name, this is one of the worst things that you could probably do . . . That really friggin’ bugs me. I think I’ll be irritated forever.

In other words, the Astros players accepting Manfred’s immunity to throw Cora, Beltran, and even Hinch and Luhnow under the proverbial bus isn’t even close to being Mike Fiers—frustrated that attempts by himself and others in the know to get reporters to push for exposing the AIA previously—finally blowing the Astrogate whistle to The Athletic‘s Ken Rosenthal and Evan Drellich last November.

Kelly may have missed Cora telling Rivera it wasn’t only players who might have made himself and/or Beltran sacrificial lambs. “There has been a narrative out there of what happened,” Cora said.

Ever since mid-November until the commissioner announced the results of the Red Sox investigation, I have read many things that are true and many others that are not.Out of this whole process, if there is one thing that I completely reject and disagree with is people within the Astros organization singling me out, particularly Jeff Luhnow, as if I were the sole mastermind. The commissioner’s report sort of explained, in its own way, what happened. But the [Astros players] have spoken up and refuted any allegations that I was solely responsible.

If there is one thing I am absolutely sure of, it is that it was not a two-man show. We all did it. And let me be very clear that I am not denying my responsibility, because we were all responsible.

Manfred’s subsequent report on the Rogue Sox determined—after the commissioner handed 2018-19 players the same immunity to spill as he handed the Astros—that their replay-room sign-stealing scheme was actually executed without Cora’s direct knowledge of the operation.

Remember: The AIA involved either installing an illegal real-time camera or altering an existing camera off mandated eight-second transmission delays to send opposition pitch signs to a clubhouse monitor, where someone deciphered them and signaled them to hitters by way of banging a can slowly next to that monitor.

The Rogue Sox didn’t go that far. They married old-fashioned on-field sign-stealing gamesmanship to new-fashioned technology all but gift-wrapped for them. MLB itself handed them and anyone else so inclined the keys to the kingdom when it installed multiple-monitor replay rooms in both clubhouses in all ballparks.

Someone deciphered opposition signs on one of those monitors and transmitted them to a Red Sox baserunner who’d send it on to a batter. The key is that the Red Sox needed a man on base to execute the reconnaissance operation in the first place. They couldn’t and didn’t have stolen signs for every man in the lineup.

The AIA didn’t need baserunners to do its dirty work, though it could only operate in Minute Maid Park. Which made the scheme even more bizarre, never mind unnecessary, since the 2017-18 Astros actually won sixteen more games total on the road than at home.

Cora, remember, once made himself a Dodgers folk hero thanks to an epic eighteen-pitch plate appearance against Chicago Cubs pitcher Matt Clement that ended in a two-run homer into Dodger Stadium’s right field bullpen. Now he’s a pariah for being the bench coach of the ’17 Astros and the manager of the ’18 Red Sox, both of whom beat the Dodgers in back-to-back World Series.

Unlike those Astros who met the press as spring training opened (pre-coronavirus shutdown) and sounded as unapologetic as men offering apologies can sound, outraging about seven-eighths of MLB players, Cora did apologise for both the AIA and the Rogue Sox. “I understand why people think that our championship is not valid, and it’s our fault that they think that,” he told Rivera.

I am being honest and I apologize for what happened and for the mistakes we made as a group. I understand why people are disappointed. I am disappointed in myself. At the time, one doesn’t think about the consequences. It was something that kept growing and growing, and in the end, it was wrong. We made a mistake and I must pay for the consequences of my actions.

Kelly pondered aloud whether those Astros who spilled to Manfred called Beltran, Cora, Hinch, and even Luhnow—whose administration was controversial enough before Astrogate’s exposure, and whose departure may have been mourned the least—“and said, ‘Hey, I’m sorry’ . . . If they had said, ‘Hey, I’m super scared, I didn’t know what to do, I didn’t want to lose money, I had to rat’ . . . Grow a pair of balls and say that.”

Would that make any difference to Beltran, Cora, and Hinch now?

Beltran lost a job he’d barely begun to do but one for which he seemed qualified enough. Cora lost a job in which he’d become only the fifth rookie manager ever to win a World Series, after Bucky Harris (the 1924 Washington Senators), Eddie Dyer (the 1946 St. Louis Cardinals), Ralph Houk (the 1961 New York Yankees), and Bob Brenly (the 2001 Arizona Diamondbacks).

The hapless Hinch, who’d shown himself mostly as an ideal managerial marriage between smarts and sensitivity, was exposed as powerless to stop his charges from plunging deeper into baseball crime or to stop his superiors from fostering such an atmosphere in the first place.

Before you return to the false narrative of Kelly’s “hypocrisy” for scoring the Astros while being a member of the Rogue Sox, remind yourself: Red Sox pitchers catching on to baserunning teammates sending stolen enemy signs to hitters probably thought the runners got the signs the old fashioned way, catching on to and exploiting an enemy catcher’s inadvertent tells.

The Red Sox fell to the ’17 Astros in a division series but beat the Astros in five—abetted especially by Andrew Benintendi’s Game Four-ending, three-run-saving, series tie-thwarting catch in left field—in the ’18 American League Championship Series.

Six Astros regulars on the 2017-18 team remain with them today. How long before the AIA stain dissipates is anyone’s guess, never mind that there were those from the scandal’s birth who suggested the stain wouldn’t leave the Astros until all the 2017-18 players had either moved on or ended their career.

There’s little enough comfort for Astro and Red Sox fans still coming to terms with having rooted for two great teams who, obviously enough, lost enough faith in their own greatness. There’s also the distinct possibility that the bad blood between the Astros and the Dodgers won’t dissipate too soon, either. They meet again in Dodger Stadium in September.

“Just to say, ‘Oh, it’s done, it’s over with, move on,’ I don’t think is a reality for anyone,” Dodger third baseman Justin Turner told a Fox Sports pre-game show. “I think around the league, there are a lot of guys upset, who kind of feel like the punishment didn’t really fit the crime. I don’t know if that’ll ever go away for me.”

Millions of fans and an awful lot of players don’t know, either.