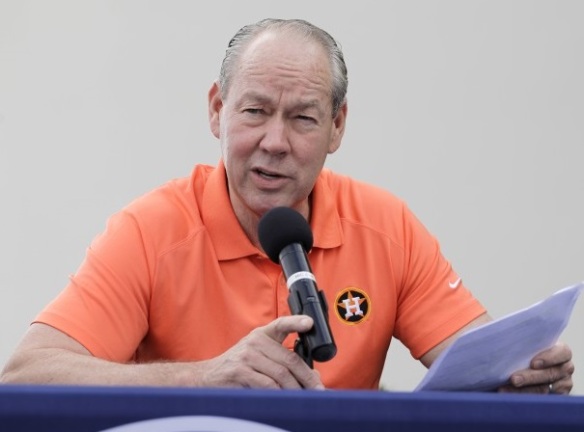 Astros owner Jim Crane—Playing what-about-ism, implying everyone else’s fault, possibly sorry only that his boys got caught, talking to USA Today’s a still-bad look for him.

In a 1964 novel about Navy fliers in World War II, Richard Newhafer’s The Last Tallyho, a fresh group of pilots assigned to a carrier performs a target hop. One of the young men overshoots the tow plane target and hits the plane, instead, flown by their squadron lieutenant. Forcing the lieutenant to a fatal water landing.

The tow pilot happened to be the squadron skipper’s best friend. When the skipper and their air group commander face questioning by the task force commander flying his flag aboard their carrier, the latter asks the skipper why they were called in. “We’re here,” the skipper replies, “because we are responsible for what happened.”

“I don’t see it that way,” the CAG practically snaps. “No matter who did what,” the skipper rejoins, “[CAG] and I are in positions of command. When you command you accept the responsibility for what is done by your subordinates.”

Maybe Houston Astros owner Jim Crane should have read The Last Tallyho. He might have learned something about command responsibility and avoiding mealymouthed avoidance of it, the latter of which he availed himself in an interview with USA Today columnist Bob Nightengale.

Remember: Commissioner Rob Manfred handed Astro players on the 2017-18 teams immunity to spill about the Astro Intelligence Agency’s off-field-based electronic sign stealing those seasons, instead of bringing the powers of his office to bear and ordering one and all to spill or be spilled. Even if the players’ union filed countering grievances, Manfred would have sent a far stronger message than a few brushback pitches.

The outrage over Kelly’s suspension was, basically, “He gets eight games for doing in essence what Manfred wouldn’t, but those guys still get off scot free?” Nobody’s justifying throwing at Bregman’s head, but the outraged are right. As a matter of fact, Nightengale asked Crane the same question, phrased a little differently. The answer may or may not surprise you.

“People are aggravated the players didn’t get suspended,’’ said the owner, “but I didn’t have anything to do with that. That was Rob’s call. Listen, it’s always going to be whatever you want to call it. A black mark. An asterisk. It happened. It’s not good for anybody. It’s not good for the game. We broke the rules. We got penalized. We were punished. There’s no doubt it weighs on all of us every single day.”

Crane seemed to say it as though he hoped that would be the end of the story. Except that it wasn’t, quite. After apologising for sounding like a fool at the infamous February spring training press conference, the subject detoured briefly toward the Boston Red Sox and the New York Yankees, both of whom have been reprimanded for a little espionage of their own, though not quite performed the way the Astros developed it.

“I think (MLB) had a bigger problem than everybody realized,’’ Crane told Nightengale, playing the what-about-ism card. “[The Yankees and the Red Sox] were doing things and got caught, but we’re the ones who took the bullet. That’s the way it works. I’m not trying to blame anyone else. It was our problem. We dealt with it.”

Except that, after a little talk about things such as revelations about the Astros’ less than honourable front office “culture,” Crane tried to blame, well, something close enough to everyone else as well as the Yankees and the Red Sox.

“I just think everybody was paranoid that everybody was doing it,” he said. “The technology was right in front of you. We already know two others teams were doing it and got caught. But the way we were doing it, that was pretty (stupid). I mean, banging on trash cans? You could have found a better way to do it.”

“Crane’s take . . . seems to be that he and the Astros are the real victims here, and everyone else should leave them alone already,” writes NBC Sports’s Craig Calcaterra. “Really. That’s the vibe he gives off on all of this. Crane seems to believe that the Astros sign-stealing fallout is overblown and that the public’s anger mostly has to do with how Crane himself bungled the P.R.”

Crane seems indeed clueless that, except for the Red Sox’s AppleWatch incident late in the 2017 season and an extra Yankee dugout phone the same time, the AIA didn’t stop at just the technology just being “right in front of you.” Not even close.

The Red Sox’s Replay Room Reconnaissance Ring didn’t involve anyone altering a real-time monitor feed to decipher opposing pitch signs to signal to their baserunners who’d then send the pilfered intelligence to their hitters. Needless to say by now, it also didn’t depend upon having a man on base to receive the stolen signs in the first place.

It would have shocked nobody to learn that the Rogue Sox weren’t the only team to operate a similar reconnaissance ring out of the replay room. And, yes, MLB handed them the keys to the hooch hutch with the replay rooms at home and on the road. Boys will be boys, alas, and asking them to resist such temptation would have been like asking Donald Trump to give up Twitter.

But the replay room reconnaissance ringers didn’t alter ballpark cameras off their  mandatory eight-second delays or install second cameras not on the delay to send signs to a clubhouse monitor in front of which someone, several someones perhaps, decoded the signs and then banged the can slowly for the benefit of Astro hitters.

Using what’s there for a little chicanery is one thing. Altering it or supplementing it illegally is something else entirely. When a team as genuinely great as the 2017-18 Astros were takes up such subterfuge—and if you need proof they were great without the AIA (which operated in Minute Paid Park and wasn’t portable), remember that those Astros had better road than home winning percentages in both seasons—it’s well past boys being boys.

Some accuse Kelly of hypocrisy because of his membership on the 2017 AppleWatch Red Sox. Well, now. Their replay room reconnaissance ring apparently began in 2018—after they hired, what do you know, the Astros’ 2017 bench coach and (we’ve known since the Manfred Report on Astrogate) AIA co-mastermind Alex Cora to manage them. All the way to a World Series ring.

Known to be an erratic pitcher who isn’t shy about a little headhunting when he thinks it’s called for, Kelly inverted the old observation, “If you can’t beat them, join them,” and became a Dodger last year.

The Astros’ mealymouthed responses to Astrogate questioning as spring training opened outraged the Dodgers more than most, and enough players around the Show were outraged, because they’d been the team the Astros beat in seven to win the ’17 Series. It’s not impossible that Kelly had in mind both Astrogate and what was subsequently revealed about his former Rogue Sox when he decked Bregman and Correa.

If the Dodgers weren’t playing this year’s pandemic-inspired regional season schedule, they might have faced the Red Sox. And, inspired perhaps by a few revelations in Manfred’s Rogue Sox report and his Dodger teammates, Kelly might have sent a few messages to those 2018 Sox still on the team for tainting those ’18 Series rings.

Astroworld’s been buffeted harshly by Astrogate. It’s still tussling between those of its citizens who think the AIA was a reasonable defense against whomever else was doing illegal sign stealing and those who think their faith in their team’s greatness was misplaced or abused.

Crane hasn’t said much if anything about that yet.

Meanwhile, note once again Crane’s choice of phrasing to Nightengale: [T]he way we were doing it, that was pretty (stupid). I mean, banging on trash cans? You could have found a better way to do it. Is he saying the AIA itself was stupid? Is he saying he’s sorry only that the Astros got caught committing high crime?

“We’re sorry. We apologized. But no matter what happened, it wasn’t going to be enough,” Crane told Nightengale. “People wanted me out of baseball. They wanted players to be suspended. They wanted everything.” Setting aside that those February apologies were as non-apologetic as apologies can get, what did he expect people to want? A whitewash?