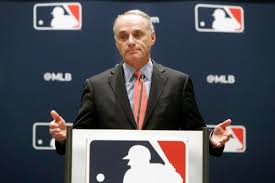 It’s hard to say whether Commissioner Nero has really put his fiddle away all the way. But a coronavirus outbreak among too many Miami Marlins, a couple of St. Louis Cardinals, and perhaps a few more as yet unidentified, has Rob Manfred preparing to shut down a delayed major league season that maybe shouldn’t have been tried in the first place.

Manfred has told Major League Baseball Players Association chief Tony Clark that baseball better do a better job managing its heeding of the protocols or else. Another Marlins-like outbreak, Nero said, and we’re sending the cardboard cutout fans home, turning off the canned crowd noise, shutting down the free runners on second to open extra innings, and turning off the echo chambers on the field.

Memory recalls a television drama on which an indignantly embarrassed father sent his wisenheimer-beyond-her-years teenage daughter to her room. The girl didn’t skip a beat. “The ultimate punishment,” she snickered. “If you only knew what goes on in our rooms.” If and when Nero sends his players home for the year, it’s not as though that’s going to deprive them of anything.

For a lot of players whose early returns in the truncated season aren’t exactly the kind they’re used to delivering, it’ll be a kind of sweet relief. For them and everyone else, it’s not as though getting early return to their loved ones equals the ultimate punishment. Unless, of course, they’re in one of those baseball marriages that won’t survive all that  togetherness.

(Once upon a time, when legendary executive George Weiss was canned as the New York Yankees’ general manager, and before he was engaged to be the president of the newborn New York Mets, his wife, Hazel, proclaimed, “I married George for better or for worse, but not for lunch.”)

The Marlins have had a week’s worth of games postponed. They finally got a bus to take them from Philadelphia home to Miami. The nostalgically inclined may care to note that they may not necessarily spend the journey swapping tales of their days in the real bus leagues.

Stories arose that the Marlins outbreak began not when they spent last weekend in Philadelphia, not when they played an exhibition in Atlanta before the season started, but when a couple of Marlins players in Atlanta decided a night on the town was just what the doctor not named Fauci ordered.

A night on the town isn’t inherently a criminal act, depending on what you do on the town. A night on the town in pandemic without masking and sanitising, if that’s what they didn’t, is infection’s invitation in a state infected heavily enough. You’re thinking, yes, if those players went partying unsafely and got infected, that’s their business until or unless they bring the bugs to their teammates and possibly their opponents.

Boys will be boys and ballplayers will be ballplayers, and they’re always dreaming up new and sneaky ways to get up on the competititon.

But Hall of Fame broadcaster Bob Uecker was only kidding when he said the 1964 Cardinals wanted to inject him with hepatitis to make room for calling up a promising prospect. If a couple of partying players shunning appropriate coronavirus masking and sanitising thought bringing the bug back to their team and maybe their opponents meant mirth and profit, it’d be a truly tasteless joke.

If they thought it might help get them, their teammates, their opponents, and the rest of the Show off for the rest of the season, though, that’s a slightly extreme (and prospectively dangerous way) to get vacation started early.

Considering what the short season has brought, though, you might have a hard time blaming them. If any of them has heard a replay broadcast of one of their home runs, or a tight play on the bases, or a homer-stealing catch above the fence, or an acrobatic leap on a play in the infield, they probably laughed that they might not weep when they heard the announcer holler, “And the cardboard goes wild!”

Call it penny arcade baseball if you must. Never mind that it betrays your age, assuming the penny arcade has gone the way of the typewriter. (If it hasn’t, whatever’s worth a penny now costs $10, anyway.) When Atlanta’s Adam Duvall homered off the snoot of New York’s Jeff McNeil’s Alaskan malamute puppy in cutout, it reminded old-timers of the arcades and midways where the fun included shooting metal ducks or knocking down voodoo dolls or steel milk bottles.

The free runner on second to open extra half-innings has caused a few people joy and a lot of other people indigestion—especially when it collides with the experiment of requiring relief pitchers to face three batters at minimum. By temporary law, managers can’t get those poor saps out of there before they get killed. Sometimes, they’ve forgotten to get them out after batter three and after they’ve been piledriven, mugged, or shot on sight.

Until now, Commissioner Nero, I think I never really gauged the reckless cruelty that baseball had room for premeditated murder.

As radio legend Gabriel Heatter liked to open his nightly commentaries, “There’s good news tonight.” The good news is that, so far, no PA system operator has made the fateful (and possibly fatal) mistake of cranking up the wild cheering when the home team’s batter gets hit by a pitch. The bad news, unfortunately, is something baseball’s proven for almost two centuries: there’s a first time for everything.

If Commissioner Nero decides the coronavirus is still too formidable a pest to continue this truncated season safely, the good news would be that the foregoing experiments be declared failures never allowed to darken the sport’s doorstep again.