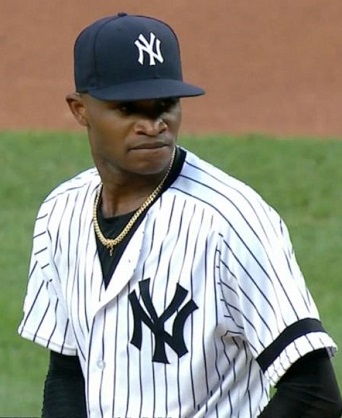 Domingo German’s 81-game suspension under baseball’s domestic violence policy is only the fourth longest such drydocking among players. Former Braves pitcher Hector Olivera beats him by a game in that regard, Phillies outfielder Odubel Herrera lost the final 85 games of 2019, and Padres pitcher Jose Torres lost 100 games in 2018.

None of which stopped the word “unprecedented” from circulating around it or some Yankee fans from screaming “We object!” To the suspension, not the act that provoked it. The general gravamen among that subset of Yankee fans is that, since German wasn’t hit with any criminal charges after all, he should therefore face nothing but spring training and the 2020 season. The general problem with that view is that there’s a major league policy in place saying oh no he shouldn’t.

The actual policy allows baseball’s commissioner to put a suspected player on administrative leave for up to seven days while investigating the accusation, and it covers domestic violence, sexual assault, and child abuse alike. There’s no minimum or maximum punishment involved formally, though the commissioner can suspend, reinstate, or defer judgment until after criminal proceedings are done.

Which means commissioner Rob Manfred was within his rights under the policy to suspend German even though the September 2019 incident in question—German was seen slapping his girl friend, who happens to be the mother one of his children, after a charity gala by retiring pitcher CC Sabathia—ended up not going to criminal charges. The incident itself was bad enough without the witnesses perhaps including someone from the commissioner’s office.

Likewise was Manfred within his rights to think as he seems to have done that further such incidents forward after, say, Addison Russell’s to get him a 40-game suspension (2018-19), or Roberto Osuna (75 games, 2018), or to Giants chief executive officer Larry Baer (almost four months last year), haven’t delivered the message yet that there are some things baseball as a franchise employer simply refuses to suffer gladly.

Formal legal criminal charges or no, neither the Major League Baseball Players Association nor the Yankees objected to German going on administrative leave from the day after his final 2019 mound appearance through the end of the postseason. Yahoo! Sports columnist Hannah Keyser says the team and the union aren’t expected to appeal the final suspension, either.

German’s suspension will take him out of the 2020 season’s first 63 games since it was made retroactive to the administrative leave onto which he was placed 19 September 2019. And while the pitcher’s missing the rest of the regular season and the entire postseason didn’t exactly help the Yankee cause, it tells you something when you fear those Yankee fans hollering against the suspension seem oblivious to its provocation.

One such response, specifically to Keyser’s column, went like this: “I have no objection to a player being suspended for domestic abuse. But I do object to it when a player was never even charged and there is no real proof that they did anything.” As if the point of witnesses having seen German slap his girl friend now equals, “It depends on what your definition of ‘witness’ is.”

It’s something comparable to saying no, you don’t object to a president of the United States being impeached for abuse of power, but yes, you object when he hasn’t been charged according to criminal law construct. Therefore, whether the House impeaching the president or baseball the employer enforcing its behavioural rules, they done you wrong, somehow. I say it that way because sports fans in their most extreme moments take certain things personally and regard them as crimes of another sort.

Let their team lose a key game down the stretch and they just about would treat it not as a hard loss but, rather, a bloody crime for which heads must roll. Let a pitcher surrender a potential game, set, and pennant-losing home run, and it’s not that the hitter was the better player in the moment but that the pitcher committed the heinous act of throwing the pitch that got bombed.

Those are bad enough. But when some Yankee or other fans all but demand baseball lighten up about suspending domestic abusers in such cases as don’t even go to court (German, fellow Yankee pitcher Aroldis Chapman in 2015, Russell) or become resolved without further ado in court (Osuna), they suggest an employer has no business disciplining an employee merely because his misbehaviour didn’t result in a court case at all, never mind a conviction or time behind bars.

The Astros fired assistant general manager Brandon Taubman, after almost a week worth of the team administration trying to cover up and smearing the reporter who revealed he’d thanked God they’d [fornicating] gotten Osuna within earshot of three female reporters one of whom wore a domestic violence awareness bracelet at the time. If a team can fire an executive over seeming to ignore if not applaud domestic violence, why can’t a team or baseball’s administration suspend someone for committing it?

It’s to baseball’s credit that it says domestic violence is intolerable among those who make the game their profession. And it should be thus elsewhere in sports, as said another respondent to Keyser’s column: “As a Dad, and yet a lifelong Yankee fan, I know domestic violence cannot and should not be tolerated. That is a given. Yet in other sports, the punishment seems to be somewhat less. Time for the other pro sports, or even college sports, to step up and take a stand also.”

All that’s accomplished by those Yankee fans saying baseball done them wrong by suspending German is to make their breed look even worse than they already look to a lot of baseball fans. A lifetime’s experience with the breed (I’m Bronx born, Bronx and Long Island bred, but a Met fan since the day they were born) informs that the main reason it’s uncomfortable to think nice things about the Yankees is their fans.

If the truest cliche about the Yankees is that they don’t like to lose, the truest about Yankee fans is that they think their heroes are entitled (underline that) to be in every postseason, if not to win every World Series, and that if they don’t get either it’s either grounds for a complete housecleaning or somebody else’s fault. But even that is bearable compared to the pockets of extremes that make even normal Yankee fans quake.

Last October came three grotesque examples from that small contingent of Yankee fans who travel first crass. Two happened in Game Three of the American League Championship Series. When Edwin Encarnacion was beaten on a slightly off-line throw forcing Astros first baseman Yuli Gurriel to a spinning sweep tag on Encarnacion’s shoulder, fans in Yankee Stadium’s right field stands threw debris on the field. When Yankee reliever Luis Cessa unintentionally hit Alex Bregman with an inside pitch, there was only too audible cheering.

The third, as Game Four was about to get underway, made those two resemble accidents. A group of Yankee fans above the visitors’ bullpen in left field taunted the Astros’ Game Four starter, Zack Greinke, over his known enough battle with anxiety and clinical depression, and the medications he’s prescribed to control those very real conditions. Rather diplomatically, Greinke said after the game that he didn’t hear the taunts, which makes them no less inexcusable.

Some of the taunts exposed the miscreants in question as further half-witted and baseball dumb, namely those taunting Donald Zachary Greinke for going by his middle name as many people do. Clearly they’d forgotten if they ever knew such Hall of Famers as Henry Louis Gehrig, James Hoyt Wilhelm, George Thomas Seaver, and Lynn Nolan Ryan, for openers. Not to mention a one-time Yankee prospect who ended up traded and beating them thrice in one World Series, one Selva Lewis Burdette, Jr.

Taunting Greinke concurrently over his mental illness and his preference to go by his middle name was merely grotesque. Objecting to German’s suspension, never mind that slapping his girl friend with witnesses present damaged her and cost the Yankees his arm the rest of the stretch, the postseason, and for two months plus to open 2020, knocks on the door of degeneracy.

The Yankees aren’t baseball’s only team with a contingent of fans about whom degeneracy applies. And more Yankee fans know and shiver over it than you might think. One such fan—he didn’t identify himself as such, but his avatar is a piece of an ancient tile identifying a Lexington Avenue subway station (the el train running behind Yankee Stadium just before ducking into a tunnel is known officially as a Lexington Avenue Express)—responded to Keyser and knocked the degeneracy contingent among his brethren over the center field fence:

MLB is not a court of law. It can discipline its employees and coaches how it sees fit with input from players union, who did not contest the suspension. If a player doesn’t like the ruling, find another place to play baseball.

There are also those who think baseball’s domestic abusers should be suspended longer, like for an entire season and postseason to follow. That’s not exactly unsound thinking.