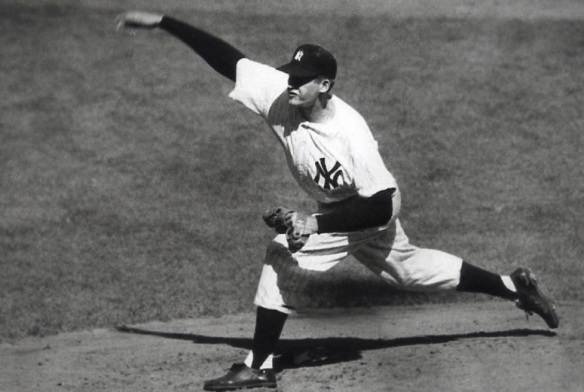 The new year wasn’t a day old, and the million-to-one shot expired. The month of Sundays turned Mondays. The imperfect (unperfect) man who pitched a perfect game in the 1956 World Series lost his battle with esophegeal cancer at 90 on New Year’s Day. And Hall of Famer Yogi Berra got to take a flying leap into Don Larsen’s arms one more time, this time in the Elysian Fields.

From Joe Borden (of the pre-historic National Association) in 1875 through Justin Verlander at the near-last minute of the 2019 season, major league baseball pitchers including 35 Hall of Famers have thrown 303 no-hitters. That’s eleven percent of all no-hitters, including perfect games, thrown by Hall of Famers from John Montgomery Ward through Roy Halladay.

Baseball being a game that enables the modest or the miscast to become the immortal even for one day, Larsen was of a perfect piece on 8 October 1956. As his career shook out he was more and better of a relief pitcher than starting pitcher. He was tall, threw hard enough, but as Joe Posnanski described memorably, “[his] wildness on the mound fairly well represented his wildness off the field.”

“Larsen was the greatest drinker I’ve known,” said Hall of Famer Mickey Mantle once upon a time, Mantle being a man who knew great drinkers when he saw them having been one himself for too long. Larsen lived enough in the wild before he married in 1960 that his teammates nicknamed him Gooney Bird.

But the greatest drinker Mantle ever knew went to a no-windup delivery for Game Five and wound up flying into Series history singularly, remaining there to this day. The nearest anyone’s gotten to Larsen for postseason pitching perfection was Halladay, pitching a no-hitter in his first ever postseason assignment to open a division series in 2011—the same year in which Halladay pitched a regular-season perfect game.

Larsen hadn’t previewed his World Series grandeur quite so grandly: he was lifted from Game Two of the ’56 Series in the second inning, despite still being ahead five runs, and his relief Johnny Kucks surrendered all five tying runs—four unearned—on a bases-loaded single (Hall of Famer Pee Wee Reese) and a grand slam. (Hall of Famer Duke Snider.)

He steamed over the early hook regardless. Publicly, he told reporters he had “not a thing” to say after the early hook and the Yankee bullpen surrendering what turned into a 13-8 loss. But he was otherwise recorded as thinking oh, would he never again pitch for Casey Stengel even if the Ol’ Perfesser begged him. He kept that vow right up until the moment he saw the old traditional manner in which a pitcher was informed of his day’s starting assignment, a baseball resting comfortably enough in his shoe.

So the legend went. The reality may have been a little different. For one thing, Larsen himself admitted years later that if he’d been his manager he wouldn’t hand him the ball again any too soon, either. And Stengel told the press the day before Game Five that Larsen would be his man to get the ball rolling. Whether Larsen himself saw it is open to conjecture: he’d gone out on the town and tied on a big one the night before Game Five.

Stengel held no grudge against Larsen for his post-Game Two fuming, obviously, Larsen having two qualities the old man admired: 1) He’d beaten the Yankees twice in a 1954 during which he earned credit for only three pitching wins. 2) Stengel recognised a champion booze hawk when he, too, saw one.

“It was between Larsen and (Bob) Turley,” said the Perfesser. “We decided it would be better to have Turley in the bullpen today and tomorrow.” Turley, of course, ended up having one of the best seats in the house for what was to come. Larsen decided to go back to what he’d abandoned in Game Two, the no-windup delivery Stengel loved to encourage in those among his pitchers who experienced control issues.

As Posnanski puts it, the Dodgers entered Game Five with the same plan they had for Game Two: “Be patient and let Larsen blow himself up the way he had in Game 2. It was a reasonable strategy; indeed, it seemed nearly foolproof. Larsen, over his career, walked about as many batters he struck out. He lost more than he won. He did not let the rigors of baseball interfere much with his thirst for living.”

You know the ancient saying about the best-laid plans, right?

With absolutely no reason to think it was entirely possible, Larsen prior to Game Five had told a friend, who turned out to have been sportswriter Arthur Richman, that he had “one of those crazy feelings that I’m gonna pitch a no-hitter tomorrow.” Richman suggested a four-hitter would be plenty enough. “Nope,” Larsen’s said to have replied. “It’s gonna be a no-hitter, and I’m gonna use my ghoul ball to do it.”

Don’t ask. Larsen never explained it. Any more than anyone could explain how Game Five began in Yankee Stadium, with both Junior Gilliam and Reese looking at called strike threes to open before Snider lined out for the side. Or, how Larsen, always prone to the walk (his walks per nine lifetime: 4.2; his strikeouts per nine lifetime: 4.9; his strikeout-to-walk ratio lifetime: 1.17), surrendered not a one while striking out seven on the day, with only Hall of Famer Jackie Robinson plus outfielders Sandy Amoros and Carl Furillo avoiding the strikeout.

Larsen would have been the first to credit a couple of fielding jewels that kept the perfecto alive. Including but not limited to Robinson slashing a line drive off third baseman Andy Carey’s glove that deflected to shortstop Gil McDougald, who threw Robinson out by a fragment at first in the second inning. Or Mantle running Gil Hodges’s long fly down to the rear latitudes of left center field for a catch he later admitted to thinking he had an easier play on it than he turned out to have.

The Hodges fly, on a hanging slider, was “his one bad pitch” of the afternoon, Berra would remember. And Larsen had one more bullet to dodge immediately afterward. More like a rocket. Amoros hit one into the right field seats that sailed foul by anywhere from two to four to six inches, depending upon who told you the story. Otherwise, Larsen was so in command that he ran a three-ball count to only one hitter (Reese) all afternoon.

He was also calmly aware of what he’d done, more sanguine about it as the years went passing by. If you found his home phone number and wanted to talk a little baseball, he’d likely needle you the way he once needled New York Post writer Mike Vaccaro: “You want to talk about my year with the Orioles, right?”

Larsen’s career began with the Orioles, when they were still the St. Louis Browns. He became a Yankee in one of the strangest trades in baseball history—a seventeen-player swap in November 1954, that made Yankees out of Larsen, Turley, and future major league manager Darrell Johnson, among others. And, that made Orioles out of reliable platoon outfielder Gene Woodling and infielder Don Leppert, among others. He became an ex-Yankee in the 1959 trade with the Kansas City Athletics that made a Yankee out of Roger Maris and ex-Yankees out of Larsen, Hank Bauer, Norm Siebern, and the future Marvelous Marv Throneberry.

New York Daily News baseball writer Joe Trimble, Vaccaro records, was paralysed after Dodger pinch hitter Dale Mitchell struck out to send Yankee Stadium berserk and Berra leaping famously into Larsen’s arms in front of the mound when the perfecto was finished. Trimble couldn’t think of a single line to open his story. His eventual Spink Award-winning colleague Dick Young, himself bristling to finish a pair of stores related to the game, did it for him: “The unperfect man pitched a perfect game.”

“Mortal men get crushed by immortal deeds,” Thomas Boswell wrote about Roger Maris, who suffered unconscionable abuse for daring to break ruthsrecord in 1961, upon Maris’s death in 1985. Larsen was a mortal man who felt elevated by his immortal deed. “Sometimes, a week might go by when I don’t think about that game,” he once said. “But I don’t remember when it happened last.”

After his long enough pitching career ended, Larsen tried major league front office work and then liquor selling, neither of which agreed with him in the end, before going to work for a California paper company successfully. He even carried a little mojo from the game at assorted old-timers’ gatherings one of which turned rather explosive in its own right.

After Yogi Berra ended his longtime rift with George Steinbrenner, the Yankees gave him Yogi Berra Day in 1999—forty years after he’d gotten one as a player. Larsen and Berra remained lifelong friends, and on the second Yogi Day Larsen was invited to throw a ceremonial first pitch to his old battery mate. Then the interleague game against the Montreal Expos began. And David Cone, the former Met, beat the Expos with . . . a perfect game.

Larsen said later it was the only perfect game for which he’d been present from beginning to end since the one he threw in the ’56 World Series.

The wild Yankee settled himself in due course, of course. He and his wife, Corinne, were married six decades when he died; he found a pleasant life in Hayden Lake, Idaho; he never lost his zest for life despite the emptiness he experienced now and then after realising he was the last man standing from both the starting lineups of his perfect game and his last pre-Baltimore team of Browns.

“That carries a little weight by itself, but I’m just not sure how much,” he told an Idaho reporter two years ago. “The last one to go was Yogi in 2015. It’s lonesome when you get to the top.”

We may presume that once Yogi took that welcome-home flying leap into his arms on New Year’s Day, Larsen in the Elysian Fields won’t be entirely lonesome at the top anymore. But our island earth may be a little more lonesome for missing the million to one shot, the nice guy who lived fast enough, settled well enough, and for once in his otherwise ordinary baseball life did what couldn’t be done. And hasn’t been done since.