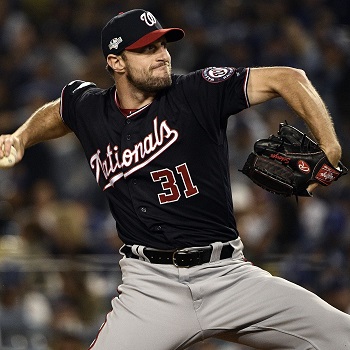 Could that someone out of the pen be Max the Knife?

Bet on it: it doesn’t happen if Matt Williams was still the Nationals’ manager. Bet a little on it: it might not even happen if Dusty Baker was still the manager. Davey Johnson, maybe. But it happened through the courtesy of incumbent Dave Martinez.

And it got him a return to Nationals Park with their National League division series against the Dodgers tied at one apiece. The Nats ain’t ready for the last dance just yet. And if they keep this up, they just might get one in the World Series in due course. Might.

Williams was too wedded to The Book, whatever he thought it was, to have even thought about bringing Max Scherzer in from the bullpen in National League division series Game Two. Compared to Williams, Baker was John Coltrane, but I’m not sure even Baker might have gone there, either.

Johnson’s the man who once inserted one relief pitcher into right field and the other on the mound (Roger McDowell and Jesse Orosco, or was it Jesse Orosco and Roger McDowell), then rotated them between the positions until his Mets won the damn game. Johnson just might have reached for Scherzer Friday night.

But Martinez did, in the eighth inning. “We weren’t expecting that,” lamented Dodgers manager Dave Roberts after the Nats finished the 4-2 win they’d started. The Dodgers and just about everyone else in the solar system.

After a long season that only began with the distinct appearance of Martinez awaiting his call to the guillotine as its victim, not its operator, who the hell did he think he was Friday night, Casey Stengel?

The good news was Scherzer striking out the side in the eighth. The bad news was, the Nats still have an honest to God bullpen, and they’re still one of the shakiest bunches this side of the old Soul Train dancers. Daniel Hudson got the ninth inning gig and got himself the bases loaded—partly because Martinez took the gamble of putting the winning run aboard with two out to set up a possible force—before swishing Corey Seager out to end it.

And before Max the Knife came in for the eighth, Sean Doolittle, usually the Nats’ closer, relieved Stephen Strasburg for the seventh and, after striking out MVP candidate Cody Bellinger to open, threw Max Muncy a dead center meatball that Muncy drove dead over the right field fence to close the Nats’ lead to a single run.

Good thing Doolittle’s pinch hitter Asdrubal Cabrera smacked Dodger reliever Dustin May’s first service into right center field with second and third for the fourth Nats’ run. Better thing that Martinez was only too willing to say screw the protocols and reach for Scherzer for the eighth. Best thing that Scherzer got Gavin Lux, pinch hitter Chris Taylor, and Joc Pederson on three straight Duke Ellingtons: It don’t mean a thing if it ain’t got that swing.

It’s one thing to go all-hands-on-deck in a win-or-be-gone play-in like a wild card game. It’s something else, seemingly, to load your bullpen with your grand starting pitchers in a division series. If you still want Scherzer to start Game Three for you in Washington, it’s entirely doable after Scherzer worked only the one inning without even thinking about asking what the hell he was doing strolling in from among the arson squad.

“All the chips are on the table,” Scherzer said after the game.

Except that Martinez hinted powerfully enough that it’d be Anibal Sanchez likely to start Game Three—with Patrick Corbin available in the bullpen. Nobody around the Nats thinks it’s such a beyond-sane idea. Certainly not Scherzer.

“I’ve been in these situations before where you’re pitching on two days’ rest in all-star games and different times in the postseason,” he told reporters after Game Two. “I know that on two days’ rest, you’ve got one inning in you. So, I said whatever the situation is, I’m ready to pitch.”

Remember: that’s the man who refused to let something so trivial as a black eye and a swollen face stop him from taking his next turn and throwing a ten punchout, four-hit gem in a doubleheader nightcap in late June. A man who’ll pitch when, never mind until he’s black and blue in the face isn’t going to flinch over coming out of a postseason bullpen for a quick round.

Oh, goody (not), the Dodgers must be thinking. Remember last year. They were undone in a World Series when the Red Sox started David Price twice and closed with him once, started Chris Sale once and closed with him once (the Series winner, as it happens), and started Eduardo Rodriguez once and drew him in from the pen twice. Hello, Yogi, wherever you are around the Elysian Fields, it’s threatening to get late early out there again.

Strasburg didn’t seem to mind that Max the Knife stole some of his thunder on a night when he needed to be a little beyond his best himself. You can afford to be sanguine when your mates pry three runs out of a Clayton Kershaw who still can’t seem to find and sustain the best of his best in postseason play, while you’re busy punching out ten in six innings, surrendering three measly hits, and one measly earned run.

And it helps even more when you now have a postseason career 0.64 ERA while allowing but one run so far this October. This keeps up, we’re going to be saying Strasburg’s name in the same postseason sentences as those of Sandy Koufax, Bob Gibson, Mickey Lolich, Orel Hershiser, Curt Schilling, Madison Bumgarner, and Justin Verlander.

You may also be saying other names to refer to the Nats before long. Ringling Brothers and Scherzer and Strasburg Circus. Brother Martinez’s Traveling Salvation Show. The Mothers of Inversion. The Dodgers could be describing them with the last of those with “of Inversion” replaced by a twelve-letter compound euphemism for “maternal fornicator” before long.