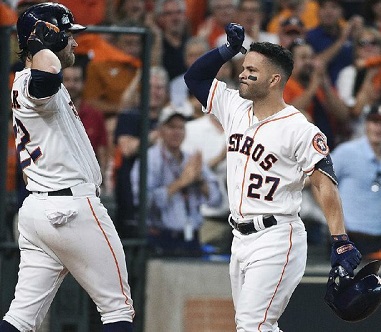 Jose Altuve (right) and Josh Reddick on the cusp of a forearm bump after Altuve hammered his fifth-inning Game One two-run homer . . .

Whenever I get to watch the Astros play, whether in the moment or aboard repeat broadcasts such as Game One of their American League division series, I’m hard pressed. There’s more than enough to enjoy about the team, but all bets are off if not only Jose Altuve is at his appointed station at the plate and at second base but Justin Verlander is on the mound.

Especially Altuve. Especially the sense I once had of him that’s confirmed in a striking profile by ESPN’s Jeff Passan the morning after the Astros, with Altuve firing the first shot at last, dispatched the Rays, 6-2, Friday afternoon.

I always sensed somehow that there was a warehouse of insecurities inside Altuve, that no matter what he could and did do at the plate or in the field he’d never quite believe it wouldn’t be the last time he’d do either, that he could win a game singlehandedly and think it was a huge mistake, somehow.

Passan confirms that sense. He writes that first basemen greeting Altuve after base hits this year were surprised to hear him say, without being facetious, that he was only too glad to be there and, as he told one, “I’m getting old, Papi.”

“[H]e wasn’t sandbagging,” Passan wrote of the 29-year-old who still plays baseball like a sandlot kid who’d do anything to keep his parents from announcing dinnertime while he’s still in the middle of a game. “This is how he thinks. Perpetually pessimistic, professionally defeatist, Altuve believed—truly, honestly, earnestly believed—that even in the midst of another brilliant year, he was ever teetering, on the cusp of losing his swing.”

The brilliant year didn’t start that way. It took Altuve over a month to shake completely away the weakness he felt after off-season knee surgery, then a hamstring injury took him out for five more weeks. He wasn’t even close to the only Astro on the injured list—like the Yankees, their depth could make you forget they were a traveling edition of Grey’s Anatomy this year—but something always seemed missing no matter how potent the team was when he wasn’t there.

On a team full of players who don’t disguise their fun quotient, Altuve makes the rest of them seem like basket cases in comparison. This is a guy who could light the entire ballpark up with one flash of that half-boyish, half-mischievous grin if there was ever a power failure in the joint. And yet he’s still the most self-lacerating Astro, the guy who thinks every hit, every smart play at second base, is going to be the last.

That was no cursory joy Altuve let show when he vaporised Rays starter Tyler Glasnow in the bottom of the fifth—after Glasnow to that point matched shutouts with Verlander, the ancient craftsman, the old man who works with brains as well as a still-deadly repertoire—and, with Josh Reddick aboard from a leadoff walk, turned on a third straight fastball and sent it into Minute Maid Park’s Crawford Boxes.

It’s become a habit for Altuve. Friday night’s blast was the fifth time he’s cleared the fences in opening division series games and the ninth time he’s done it in the postseason any time. At the rate he’s going, they’ll start hanging signs on the outside of Minute Maid saying “Jose Altuve Opening Tonight!”

“It’s like clockwork,” said Astros manager A.J. Hinch of his compact second baseman who’s six parts walking power plant and half a dozen parts a psychological study. “Every ALDS it seems like he busts out with a really good game.”

Altuve had a glandular second half of the season once he found himself back in synch: he had a .995 OPS in the second half with almost twice as many total bases as he’d had in the interrupted first half. Measure him by the concept of the real batting average—total bases (which treats all your hits the right way, because all hits are not equal), walks, intentional walks, and sacrifices, all divided by plate appearances—and Altuve’s second-half .638 is +131 over his career RBA.

But the little big man’s achievements, regular or postseason, including vacuuming the final out of the Astros’ 2017 World Series conquest, come wrapped in a package dominated by a guy so hammered with self doubt that if you met him at a party he’d be tucked in a corner praying for the courage to ask the prettiest woman to dance and oblivious to ten of the ladies praying for him to do likewise.

“He could be player of the week, ten for his last twelve, go 0-for-3 in a game, get an infield single in the eighth and look at me and go, ‘Papi, I needed that’,” Reddick told Passan of Altuve. “No, you didn’t. You didn’t need that. I mean, we need every one of ’em, but you? You don’t need that.”

The Astros added a pair of runs in the fifth after Altuve’s launch and after Glasnow’s relief Brendan McKay was lifted for Chaz Roe, when Alex Bregman and Michael Brantley scored on Yuli Gurriel’s behind-the-infield popup since it ended up bounding off Rays second baseman Brandon Lowe’s glove. Back-to-back doubles provided the rest of the Astro runs in the seventh; the Rays had only an RBI single and RBI double back to back to answer at last in the eighth.

And Glasnow’s gutsy start—including escaping a ducks-on-the-pond jam in the third—until Altuve hammered him in the fifth, was hardly a match for Verlander’s methodical carving, the Hall of Famer in waiting striking out eight in seven innings and surrendering nothing otherwise except three almost generous walks and a leadoff single to Lowe in the top of the fifth.

The righthander who surrealistically nailed his 300th strikeout of the year and the 3,000th of his career to the same Angels hitter (Kole Calhoun) on the same night last weekend could have pitched Game One with his arm in a cast and still manhandled these game, gutsy, but overmatched Rays.

Small wonder Rays manager Kevin Cash’s postmortem may yet enter future collections of baseball quotations: “We got Verlandered.” Verlander couldn’t suppress a laugh when told of that one. “It’s a pretty great compliment,” he finally said. “I don’t know what else to say, other than that.”

He could have said the Rays also got Altuved.

That’d be the easy part. The hard part, as often as not, is getting Altuve himself to believe it. Passan is one of the most acute baseball writers and students of baseball psychology around the game today. Reading his profile is to gather that it would take a jury’s verdict to convince Altuve he isn’t even close to losing it.

Don’t be shocked if Altuve pulls into any base with another hit short of a home run and tells the opposition fielder standing by, meaning every word of it, that he thought he’d never get it, that he thought his very life depended on it, that it was a relief to know he’d gotten through another plate appearance without disappearing.

A lot of the greats never quite seem to believe what they can still do. But few of them live on such a self-imposed edge as this still young man does. It makes him one of the game’s genuine greats, and it may help to keep him somewhat underrated, somehow.

The second part disappoints. The first, for Astros fans and anyone who loves the game, couldn’t possibly disappoint. All you have to do now is convince Altuve. Ladies and gentlemen of the jury, good luck with that.