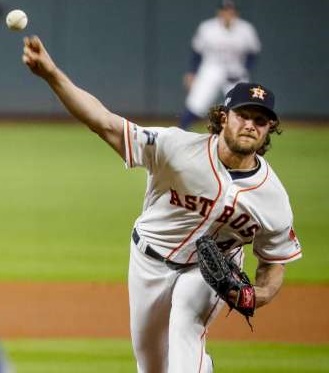 Gerrit Cole was the Dali of pitchers Saturday night . . .

You’d think a man who pitches like Bob Gibson in a postseason contest wouldn’t have to see his masterpiece turned into a hair raiser after he finally has to leave the game. But you can rest assured Gerrit Cole has seen a lot worse than the ninth inning Saturday night.

And you can rest assured further that he’d rather have seen his Astros survive that inning and come out one game from sweeping their way to the American League Championship Series than any known alternative.

Fifteen strikeouts. Five third strikes fastballs, five on curveballs, five on sliders. Missing by one measly walk an immaculate inning in which all three punchouts went swinging strike, foul, swinging strike. His lone walk being the one that ended his evening at last when his petrol ran empty at last.

And what was Cole’s final reward for painting such a masterpiece as Dali himself would envy? Other than watching his Astros more or less sneak a run home in the seventh and eighth, to pad the lead Alex Bregman provided with a leadoff home run in the top of the fourth?

He had to watch his relief Roberto Osuna go from striking out Yandy Diaz—without whom the Rays wouldn’t even have been in the division series in the first place—on three pitches to end the eighth to stringing maybe the skinniest tightrope the Astros could possibly walk in the top of the ninth.

He had to watch Austin Meadows greet Osuna with a liner down the left field line that George Springer, moved over from center in a defensive re-alignment, couldn’t get to in time for a leadoff hit. He had to watch Tommy Pham stroke an immediate followup single right up the pipe. He had to watch Osuna walk Ji-Man Choi to load the bases once.

Then, he had to watch Bregman uncharacteristically bobble for just a moment Avisail Garcia’s bouncer to the left, settling for a force at second but no shot at a double play, and allowing Meadows to score. And, he had to watch Osuna wrestle Brandon Lowe to a full count before walking him to re-load the bases.

Exit Osuna, enter Will Harris, exit Rays catcher Travis d’Arnaud on a hard-earned swinging strikeout, exit Rays center fielder Kevin Kiermaier on a bouncer to first, and for the first time since the eighth Cole and the Astros could breathe without reaching for the oxygen tanks. And the 3-1 win put the Rays’s season on a respirator after all.

“Not the way we wanted to end it,” said Astros shortstop Carlos Correa after the game, “but we got it done and it’s a W.” Maybe the hardest-earned W of a season in which the Astros pushed 107 winning chips to the postseason table. Sometimes even the most powerful threshers in baseball don’t thank their mound lancers by finishing what he started simply.

If Rays manager Kevin Cash thought his team was Verlandered in Game One, they got even more Coled in Game Two. And the Astros’ bullpen got thatclose to throwing Game Two away. Astros manager A.J. Hinch must be feeling very fortunate that he has the kind of starters who make things like the Rays’ and others’ bullpenning a non-topic for him.

“Whether it’s about the new-age opener or pulling guys third time through, most of the people that support that haven’t had Verlander or Cole on their team,” the skipper said, and he’s speaking only the plain truth. Most teams would thank God and His servant Stengel for having just one superstud starter. He’s got three; Nationals manager Dave Martinez also has three.

He may not yet have to get as creative with his boys as Martinez has had to with Stephen Strasburg relieved by Max Scherzer Friday night, but then Hinch normally doesn’t have a bullpen full of arsonists, either. Hinch has three stud relievers in Osuna, Smith, and Ryan Pressly. Make large room for all the bullpens who’d be grateful to have just one.

Pressly was a non-factor Saturday for having worked in Game One. It’s not scarifying just yet for Osuna to have one off-night, but even these finely tuned, well-oiled, near-perfectly calibrated Astros can’t afford another one too soon if at all. Because even superstud starters like Verlander and Cole have their absolute limits.

Let’s admit that for seven innings Cole didn’t know the meaning of the word “limits.” For seven innings he pitched like two Hall of Famers for the price of one, even as for six  innings the Astros pushed Rays starter Blake Snell—pitching gutsily after missing two thirds of the season on the injured list—and two Rays relievers but couldn’t quite break them except once.

Cole throttled the Rays with his mind almost more than his arm. His reputation in the game, very well earned by now, is that of a man who’ll throw a pitch in the first inning thinking it’s going to set up a pitch four or five innings later.

“He goes to areas of the strike zone whenever he needs to, whenever he wants to, whenever he sees something. That’s creative,” Hinch said after the game. “When we talk about creative, we often talk about guys that don’t have elite stuff like this. He can execute virtually any game plan for a reason . . . His mind and his ability to trust his adjustments set him apart.”

The only real breakage the Astros gave Snell opened the bottom of the fourth. Bregman worked  himself back from 0-2 with three straight solid takes on pitches low and away from him, fouled off an inside fastball, then sent the next fastball to the back of the Crawford Boxes to start what little scoring there’d be in the game.

Cash lifted Snell after he struck out Astros uber-rook Yordan Alvarez swinging right after the Bregman bomb. The Rays bullpen kept the Astros to just that run until the bottom of the seventh, while Cole looked more and more as though he’d go the entire distance without so much as a twitch of nerve or a flicker of exhaustion.

With the Rays’s usual closer Emilio Pagan opening the Houston seventh, Astros first baseman Yuli Gurriel grounded one hard to the hole at short and Willy Adames grabbed it, bobbled it, and threw in the dirt past first. Correa promptly ripped the first pitch down the left field line to the wall for second and third.

After rookie Kyle Tucker grounded out right back to the box, Astros catcher Martin Maldonado, Cole’s personal catcher who doesn’t hit well but handles pitchers like a symphonic conductor, checked in at the plate. He hit well enough this time, dumping a quail into left center enabling Gurriel to beat a throw home for a second Astros run.

It could have been worse for the Rays but somehow Pagan got George Springer to pop out to second and Jose Altuve, Game One’s co-hero, to fly out to the edge of the right field track to escape for the time being.

No such luck in the bottom of the eighth with Nick Anderson on the mound. Diaz knocked Bregman’s hard one-out grounder and threw wide of first enabling Bregman’s infield single. Alvarez then tore the first pitch into right for a base hit and first and second, and Gurriel flied deep enough to right to push Bregman tagging to third.

Then Correa slashed a 0-1 fastball into right to send Bregman home, before Colin Poche relieved Anderson and caught Tucker looking at strike three.

“We’ve got a lot more work to take care of,” said Cole after the game. “There’s a few months this winter that maybe we can sit back and have a drink about it. Right now, it’s on to the next one.”

That may come sooner than even the Astros think. And considering the results in New York—where the Yankees bludgeoned the Twins in the first two games of their division series, outscoring the Twins 18-6 over the two, with the crowning burial Didi Gregorius’s monstrous grand slam in a seven-run third Saturday—they’ve probably got the scouting reports on the Battered Bombers well enough studied.

An Astros-Yankees American League Championship Series would be a hell raiser. The league’s two most triumphant teams and their two most injury battered on the season, both of whom showed they were deeper than the Pacific Ocean when the casualties began. Gray’s Anatomy vs. House.

Says Cash: his guys know what’s at stake. Says Twins manager Rocco Baldelli: his guys know they can turn it around. Say the Astros and the Yankees, with Wade Miley (Astros) and Luis Severino (Yankees) due to start their Game Threes, and just as the man used to say on the radio: it ain’t gonna be easy, Clyde.