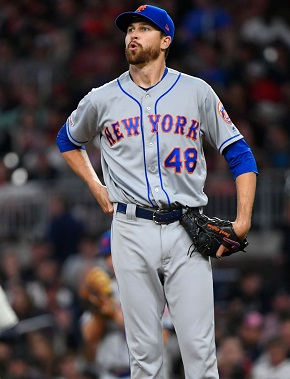 The defending National League Cy Young Award winner isn’t starting as strong out of the box this season. It’s not unrealistic to suppose that Jacob deGrom may yet remain a great pitcher without having another season even remotely similar to his 2018. Some of the greatest pitchers who ever took the mound had single seasons of comparable surreality and never again got anywhere near them.

But then there seems to be a contingency worried especially that in his first four 2019 starts deGrom is particularly vulnerable to the long ball. He’s surrendered five in his four starts thus far, three in his next-to-last start and two Sunday to the Braves.

DeGrom’s early issue, by his own admission, seems to be testy control despite a National League-leading fourteen strikeouts per nine innings. It’s also not impossible that in the back of his mind he might be just a little desperate to live up to that five-year, $137.5 million extension he signed before spring training ended. Joe and Jan Fan don’t like to hear this, but deGrom wouldn’t be the first to put himself under that kind of pressure in the first year of a lucrative new deal, and he won’t be the last, either.

Now, back to the home run issue. You’re worried about deGrom being taken downtown? Don’t. The best pitchers who ever went out to the mound got taken there a lot more often than you think, and they still do. Max Scherzer won the second of his three Cy Young Awards (and his first as a National) in the same season he led the National League surrendering 31 bombs. Hall of Famer Robin Roberts lifetime surrendered one more home run than fellow Hall of Famer Eddie Murray hit lifetime.

Let’s take a look at the Hall of Fame starting pitchers whose careers were entirely or mostly of the post-World War II/post-integration/night ball era. You’re going to be somewhat surprised to see how often some of these men were hit for that kind of distance:

Robin Roberts is one of only three in the group to have surrendered 40 or more bombs in a season. Roberts surrendered 40+ homers in three seasons, including the 41 he surrendered in the last of his six straight 20+ win seasons and a season in which he led the league in pitching wins. The 505 bombs he surrendered lifetime stood as a record until broken by forever young Jamie Moyer.

If you told certain fans today that Roberts surrendered 505 homers without telling them anything else about him, they’d probably question what the hell he was doing in the major leagues at all. If you told them Roberts was probably the single best pitcher in the National League for five out of six seasons from 1950-1955 (the league’s arguable best pitcher in 1952 was Sal Maglie), such fans might question your sanity.

In nine of his nineteen major league seasons, however, Roberts surrendered 30+ home runs on a season. He was a pitcher who lived by pinpoint control and, in his prime seasons with the Phillies (1950-56) his ERA was usually below 3.30 and his fielding-independent pitching (ERA minus defense behind the pitcher) was usually below 3.65. He also had a better fastball and threw harder than his strikeout totals would tell you.

What happened to Robin Roberts starting in 1956 was that season after season of overwork, as the Phillies came to depend far too much on his work as their pitching gradually eroded otherwise, eroded his once-formidable fastball. (One big blow came when Curt Simmons was drafted into military service after the 1950 Whiz Kids pennant.) He spent several years struggling before finally reinventing himself (some thought kicking and screaming) as a finesse pitcher.

Phil Niekro was the opposite. He lived on the knuckleball, a pitch which can be a challenge to hitters until it doesn’t dance around in the elements. That’s when it becomes entirely hittable and not just to the middle of the outfield. (Just ask Aaron Boone, who reminded Tim Wakefield the hard way to end the 2003 American League Championship Series.) Niekro didn’t get to become a regular starter until he was 28, and he was charged with a lot of losses pitching for lame teams, but he was durable enough to make near quarter-century career and last long enough to get credit for 318 wins.

And Knucksie’s highest home runs surrendered season (1979, when he led the majors in surrendering 41 bombs) is five shy of Roberts’s. (In 1955, and Roberts also led the majors that season.) Jack Morris, a very controversial Hall of Famer, is the only other pitcher on the survey to surrender 40 in a season. He did it in 1986, a season in which he was credited with 21 wins and led the Show with six shutouts.

Thirteen of those Hall of Famers are below the group average for homers surrendered per 162 games; twelve are above it. Their actual overall ratings as pitchers haven’t been compromised or enhanced by their home run surrenders, although Jay Jaffe in his brilliant Hall of Fame analysis, The Cooperstown Casebook, ranks Seaver objectively as the greatest post-World War II pitcher by his peak and career value alike. Jaffe also ranks Johnson as the top postwar peak value pitcher (Koufax would give a powerful argument to the contrary), since he didn’t really establish himself as an elite pitcher until he was 29, though his career value is almost as high as Seaver’s. And he’s three above the average for homers surrendered per 162.

I don’t think you can plausibly become paranoid over any pitcher’s home run vulnerability if twelve of those Hall of Famers averaged more than 20 homers surrendered per 162 games. But in case you were still wondering, here’s how Jacob deGrom looks in his career, along with a couple of other great contemporaries:

That’s right. DeGrom through today averages two per 162 below the average of that isolated group of Hall of Fame pitchers, with Scherzer averaging four more and Bumgarner two. (Sorry, MadBum, we don’t remove a home run surrendered per home run hit. Wink.) Scherzer’s the only one of the trio to get hit long distance 30 or more times in a season . . . and, remember, that was a Cy Young Award season for him.

When Al Weis—a modestly-endowed Mets middle infielder with seven lifetime regular season home runs—hit one out to lead off the bottom of the seventh to tie Game Five of the 1969 World Series at three, he didn’t just square up some rag arm. He flattened Dave McNally, future free agency co-pioneer but a 20-game winner for the Orioles that season. Oops. McNally surrendered 21 bombs on the regular season, and Weis’s surprise shot was the third McNally surrendered in that Series.

Preacher Roe, the Brooklyn Dodgers semi-legend whose money pitch was a not-so-discreet spitball, was both a solid competitor and prone to the long ball. He averaged 23 per 162 games lifetime and surrendered 25+ in a season four times, including back-to-back seasons of 34 (he led the majors) and 30 despite a 3.17 ERA over the two seasons. He was also worth 10.3 wins above replacement level over the two years; or, 5.2 average between the two—which is considered All-Star level or better. (Indeed, he was a National League All-Star those two seasons.)

“Don’t see why everyone gits on my hitting,” the weak-hitting, ever chattering Roe once said. “I do it the other way. I’ve thrown some of the longest balls in major league history.”

So relax, I say to both Jacob deGrom and those alarmed over his five in his first four starts. The season still has a long way to go, deGrom still has time enough to fix his control issue, and the best pitchers in the business have had to stop worrying and learn to tolerate the bomb.