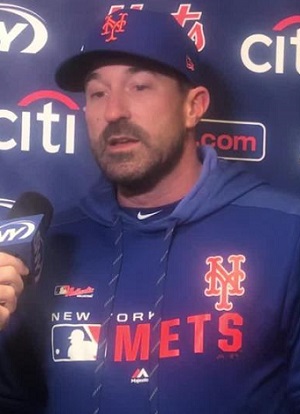 Mickey Callaway, after the Mets beat the Phillies the hard way Monday night.

If you don’t ask your best bullpen bull for a four-out save in April, it doesn’t normally matter. Don’t want to burn a reliever too early, too often, right? But it might be just a little different if you’re trying to stake an early claim upon your division, as the Mets were against the Phillies Monday night.

It’s smart long-term strategy to be sure your bulls stay healthy enough for a stretch drive and then a postseason. But now and then you just have to ask for a four-out save. Especially, when the guy you want most to give it to you—unless you were foolish enough to warm him up a few times in the interim without using him—hasn’t pitched in a game in three days.

And if you don’t do it against one of your top division rivals now and then before the stretch drive, there’s a fair chance you may not do it when it might mean the last barrier between triumph or disaster down the stretch or in the postseason if you get there.

Mets manager Mickey Callaway, formerly a respected pitching coach who should know better, didn’t do it Monday night, when his Mets had a grand chance to bump into first in the National League East at the Phillies’ explicit expense. And unless he’d warmed Edwin Diaz up over the three days prior during which Diaz didn’t see game action, he had a fresh enough resource to do it.

Callaway says he won’t ask Diaz for a four-out save or bring him into a tie game unless it is the postseason. That’s not exactly unsound thinking, but it’s not exactly unwise to test it now and then before the stretch and be absolutely sure Diaz can handle it at all. He didn’t get the chance in Seattle last year, but then last year’s Mariners weren’t exactly like this year’s early-season threshing machine.

Not testing it Monday almost cost Callaway a game he could have won without having to escape a gasoline fire. Oops. The fire was burning already in the bottom of the eighth, after the Mets wrestled back to a 6-5 lead, but prodigal erstwhile closer Jeurys Familia allowed a hit, a walk, then lured a double play ball—before two more walks to set up Philadelphia ducks on the pond.

Callaway instead reached for Robert Gsellman, his 4.00 ERA, and his 1.66 walks/hits per inning pitched rate. And with Bryce Harper on deck, Gsellman walked Jean Segura unintentionally on four straight pitches to tie the game at six. Gsellman was probably lucky to catch Harper off guard swinging into an inning-ending pop out to shortstop.

But he did get through the ninth unscathed to send the game to the extra innings that might have been avoided if Callaway had reached for Diaz instead. And the Mets yanked the lead back in the top of the eleventh with a little derring-do aided by a little Phillies derring-don’t: Juan Lagares, atoning for an earlier baserunning blunder on an earlier Phillies error, shot home on a Rhys Hoskins error for the seventh and ultimate winning run.

Then Callaway reached for Diaz. And Diaz struck out the side to save it for Luis Avilan, who’d pitched a scoreless but slightly bumpy tenth. It brought Avilan’s 2019 ERA down to 10.80.

Fair is fair: the game did get to that 6-5 lead in the first place thanks to both starting pitchers, the Mets’ Noah Syndergaard and the Phillies’ Aaron Nola, playing with matches before five innings were in the books. And the Mets should have heard some alarm bells there, too, considering Syndergaard complained after the game that he couldn’t grip the ball properly.

But it was hard to escape the feeling that Callaway played with a little fire himself. Especially when he reiterated after the game that Diaz wouldn’t be a topic until the ninth inning. “I think we’ve said this before,” Callaway told one reporter. “He’s not going to get four outs.”

Callaway should be reminded that a lot of baseball’s grounds are scorched, and still have debris from, similar late game reluctance by managers who could have or should have known better than to cling to The Book in their hours of deepest need:

Tony La Russa—Twice in the 1990 World Series his Athletics led in the eighth inning. Neither time did he think of bringing in his Hall of Fame closer, Dennis Eckersley, who’d had more than one outing of more than three outs on the year. (And, was notoriously stingy with inherited runners when he entered with them.)

Grady Little—He stayed with Hall of Famer Pedro Martinez’s heart while ignoring Martinez’s tank, on which the needle was past E. Trouble was, it was Game Seven of the 2003 American League Championship Series.

Little had Mike Timlin and Alan Embree ready in the pen after Martinez surrendered a one-out RBI single. Staying with Martinez cost him Jorge Posada’s game-tying two-run double. Then Little went to Embree for one out and Timlin for a pair, interrupted only by a walk for which Aaron Boone entered the game as a pinch runner.

And it ended up in an extra-inning thriller with Timlin and then Tim Wakefield going scoreless against Hall of Famer Mariano Rivera. Until Wakefield’s first knuckleball of the bottom of the eleventh flew into the left field seats off Boone’s bat with a Yankee pennant attached.

Dusty Baker—Bad enough he’d sent a hard-ridden and now spent Mark Prior out to start the eighth of Game Six, 2003 National League Championship Series, with the Cubs six outs from the World Series.

Worse: Leaving Prior to surrender a one-out double, throw a wild pitch, endure the infamous Bartman Foul, give up a walk, give up an RBI single, and watch in horror when the double play ball bounced off shortstop Alex Gonzalez’s chest, before serving the two-run double that tied the game.

Then Baker reached . . . for Kyle Farnsworth; for a sacrifice fly, an intentional walk, and a three-run double; and, for Mike Remlinger, and for an RBI single. And, an eight-run Marlins eighth.

Far worse: Baker’s closer Joe Borowski, the one Cub bullpen bull he could have and should have trusted that year, wasn’t even a topic. Especially since Borowski hadn’t seen game action since Game Three. The Cubs might have returned to the World Series fourteen seasons before they finally did if Baker asked Borowski to start the Game Six eighth.

Mike Matheny—Bottom of the ninth, Game Five of the 2014 NLCS, the game tied at three as the inning began. The Book told him don’t bring in your closer unless there’s something to save. So Matheny stayed with Michael Wacha with one out and two on but still rusty after a late-season injury layoff. His then circuit-breakers-off closer Trevor Rosenthal wasn’t even a subject.

Not until the postgame interviews. Because Travis Ishikawa couldn’t have cared less what The Book said. And Ishikawa backed up his disdain with the noisiest three-run homer in Giants history since Bobby Thomson in 1951. The ball and the National League pennant landed atop Levi’s Landing.

Buck Showalter—His power-station closer Zach Britton, the best in the business in 2016, nowhere to be found in the bottom of the eleventh, that year’s American League wild card game. Ubaldo Jimenez, normally a starter but now the fifth Orioles reliever of the night, staying in the game much to everyone’s surprise—including his own, he said later.

“We wanted to have a strong Zach and have him there in case the game goes to extra innings,” Showalter said. With two on and one out the thought that he needed a true stopper right then, no matter how well Jimenez had pitched of late, didn’t cross his mind.

Not until Edwin Encarnacion drove the first pitch Jimenez threw him so far into the Rogers Centre second deck it said there goes that idea on its way out.

You’re not necessarily going to have to think about things like that two straight nights, and that’s probably a good thing. And there’s no written guarantee that the move won’t blow up in your face. But you’ve got to try it now and then. Better to lose if the other guys overcome your best weapon than if they don’t.

Last October Dodgers manager Dave Roberts asked Kenley Jansen for six-out saves in consecutive World Series games. The first one Jansen surrendered the homer Jackie Bradley, Jr. hit to send Game Three to its eighteen-inning marathon; the next, he got two quick outs before Steve Pearce began his Series MVP destruction in earnest with a shot into a fan’s glove in the left field bleachers.

Both times Roberts made his best move. The first one he came up roses even if it took almost to sunrise for Max Muncy to hand him the bouquet; the second, he got nuked. But he went down playing his best prospective hand. And Jansen in fairness was pitching with offseason heart surgery on his calendar, too.

But Callaway may have been lucky that the Mets pulled Monday night’s game out. And luck is something these Mets haven’t had for a few years. The next time he has a prime need for more than a single-inning save from his man Diaz, but stays by his Book even on the road and even in an eighth-inning tie, his and the Mets’ luck may run out.

“We got away with stuff,” Callaway said after the Mets banked the 7-6 win the hard way. “But we still came up with a win. That says a lot.” It’ll say even more if and when Callaway’s luck runs out at the wrong time while clinging to The Book too hard.

All he has to do is remind himself about La Russa, Little, Baker, Matheny, and Showalter. And learn not to sell explosives to the Mob.