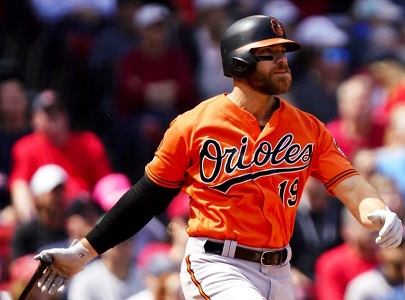 Chris Davis hitting the two-run single that broke his record hitless streak, the first hit of a 3-for-4 night.

A baseball player isn’t a pilot gone to war, and he doesn’t face the kind of death a pilot faces. But he knows the loneliness of the solo combatant in his own particular way.

In the batter’s box he is isolated from his team; it’s himself against a pitcher likewise out there alone. And baseball being the game of seventy percent failure is not a comfort if he swings, misses, or hits into another out, another time, another baseball death.

Especially if he has gone to the plate 54 times from a previous September through the second day of a new season’s third weekend, a period of 210 days without a base hit, and come up empty.

And if he has, he must learn to laugh, like Figaro, that he might not weep; dismiss the catcalls of the less intelligent or empathetic fan; dismiss the demands from the less empathetic of the sport’s intelligentsia for his head on a plate, or his contract in the fireplace; and, return to his serious work of play day in, day out, without exposing what’s surely been his quiet desperation to break the slump he fears even once may endure without limit.

Then, he has to return to his team in the dugout and the clubhouse. Praying to himself en route that they will embrace him with sympatico—even if they haul him before a kangaroo court, a former tradition not known to remain in practise too widely, for all I know—rather than join such miscreants in wishing to hang him in effigy.

It was easy for Chris Davis to be brave when he led the American League in home runs two seasons out of a particular three. It was a lot more difficult when he led the league in strikeouts two consecutive seasons. It was theoretically impossible when, last season, it was bad enough to have posted a lower OPS than the lowest such team in the American League. (Davis: .539; the Tigers: 697.)

No one including Davis could tell you authoritatively why he couldn’t buy, steal, extort, or invent a base hit, after doubling on 2-1 off James Shields of the White Sox last 14 September, until he slashed his way out of the slump in style enough in Fenway Park Saturday night, only beginning when he caught hold of Rick Porcello’s inside fastball and ripped it into right field to drive in two runs.

If you’re going to break a slump there’s no finer way. And maybe that plus even the Fenway faithful cheering him did something a little bit extra for Davis. Because after grounding out in the third, he checked in at the plate in the fifth with nobody out and two on, and tore a double to deep right center field off reliever Heath Hembree’s first pitch to him that time up, a fastball up and a little bit away.

An inning later Davis contributed to a four-run Oriole outburst with a run-scoring ground out. But two innings after that, facing Red Sox reliever Thornburg to lead the inning off, he fought back from 0-2, took one pitch above the zone and one pitch down and inside and off the zone, then caught hold of a fastball at the letters and drove it to the back of center field for another double.

If he hoped the Oriole merry-go-round would continue going ’round, his hope proved futile as he waited two consecutive outs, helped himself to third on a wild pitch, but died there upon an inning-ending ground out. The Orioles’ 9-5 win over the incredible shrinking defending world champions wasn’t even close to the story of the game.

Never mind Orioles announcer Gary Thorne hollering, “For Chris Davis, it’s over, baby! We’re not talking about it anymore!” after Davis’s two-run single. Who’s “we,” white man? you could sense the Orioles and their fans thinking to themselves. Because almost anyone in Orioles’ fatigues wanted to talk about Davis, the Davis who taught them things about grace under the unconscionable pressure of continued, merciless, despite-all-effort failure.

“He continued to show us how to be a professional,” said Orioles outfielder Cedric Mullins, almost a decade younger than Davis is, to reporters after the game. “Going through the struggles that he has, he kept his chin up no matter what. To witness that in person, it’ll help me maintain my composure when I go through the same thing.”

You notice Mullins said “when,” not “if.” Even Hall of Famers or those close enough to being one understand there’ll be times when they can’t and won’t get it right no matter how arduously they work to prevent it. Before Davis you might have to go back to 1952-53 to discover a batting slump that could have been more demoralising: the slump that began for Gil Hodges during the 1952 World Series and persisted well into the 1953 season.

For Hodges the fix proved surprisingly simple, if you take the word of The Boys of Summer author Roger Kahn: manager Charlie Dressen showed film in which Hodges developed a habit of stepping back with his back foot as he started to swing, removing its weight and balance. He convinced Hodges to move his back foot forward to where it was ahead of his front foot against the inside line of the batter’s box. “That way,” Dressen said, “ya won’t be steppin’ out of line, you’ll be stepping into it.”

But Hodges was ages 28-29 when the slump endured. Davis is 33. Hodges still had plenty of career ahead of him; Davis’s remaining career is a question mark at best. The celebration of his slump’s end can’t mask two things: 1) His 3-for-4 night was indeed just a single night; there’s no pre-ordination that he’ll continue to hit, any more than there’s one saying he’ll lapse back into persistent futility.

Hodges was so popular and respected in Brooklyn that at the absolute depth of the slump a priest who wasn’t even Hodges’s own forsook a sermon one Sunday saying it was too hot but just go home and pray for the Dodgers first baseman. A few generations later, when Mets pitcher Anthony Young finally ended a 27-decision losing streak, the ovation in Shea Stadium sounded like a hybrid of a World Series conquest and V-J Day in Times Square, and Young earned abundant empathy for his own grace under the pressure of that streak.

He also earned the empathy of Dallas Green, then the Mets’ manager, himself a former pitcher of modest abilities but still possessed of one of baseball’s most hard-bitten, bull-headed approaches, a man who thought nothing of reaming his players in the press as well as in the clubhouse, until even he couldn’t help respecting his pitcher’s perseverance, as Young never once hid from reporters or fans during the worst of the streak.

Davis has his field position in common with Hodges and his uniform number in common with Young (19), if you’re scoring at home. And, perhaps strangely enough, he did pick up two runs batted in during this season’s part of the streak, before Saturday night, working out a bases-loaded walk against the Blue Jays on April Fool’s Day, and knocking in a run with a fielder’s choice grounder against the Yankees five days later.

Some of the moral support Davis received during his slump could be described politely as sardonic. Especially considering his mammoth contract that still has four seasons to go, paying him about $92 million more to come, while the rebuilding Orioles—in third place in a suddenly weakened AL East—must navigate around the percentage of payroll he occupies.

He dropped off the proverbial table almost as profoundly as he climbed upon it in the first place. But he still moves no less than The Athletic‘s Ken Rosenthal to admonish, “Davis is a guy who has accomplished an awful lot in baseball after struggling in his early 20s, a guy who was doing extra work before games, but failing every night on the most public of stages, a guy who is deserving of sympathy, not scorn.”

His manager, Brandon Hyde, on the bridge for his first season, agrees. “You just learn about him,” Hyde told reporters after Saturday’s game. “This guy is tough. This guy is mentally tough. To persevere through that, the spotlight on him, everybody is talking about him, to see him talking about it on TV. To see him be the same guy every day and put in so much extra time . . . to see the results work out for him, it’s a great feeling.”

It’s not known yet whether anyone did likewise for Davis. Or, whether he received any contact or encouragement from Hodges’s family. (Young at one point received encouragement from the descendants of Cliff Curtis, the sad-sack Boston Braves pitcher whose record he broke.) At one point either he or Oriole fans must have been tempted to send a black cat his way for reverse fortune, as one of an earlier generation of Mets fans did for Roger Craig during his 18-game losing streak in 1963.

One thing that probably prevented Davis from becoming a true hate object was keeping a sense of humour during the slump, and immediately after breaking it. When he pulled up at first following his opening single, Davis called for the ball, something usually done for milestone hits. Well, you could call this one a milestone, breaking the longest known slump in major league history.

“I don’t know, but I’m going to get it authenticated,” the first baseman cracked. “You have to embrace it at some point.”

A quarter century earlier, the manager of an Orioles team that opened a season 0-22 showed a reporter a button given him by a fan: “It’s been lovely, but I have to scream now.” Someone should ask if the late Frank Robinson’s family wouldn’t mind lending it to Davis to keep alongside the ball he hit to end the slump. It just might do him some extra extraterrestrial good, no matter how the rest of his season plays.

“Tough times don’t last,” said Orioles third baseman Rio Ruiz after the game, “but tough people do. That’s all you need to know about Chris Davis.” Whether he or the Orioles will be tough enough together to face the end of his line in due course is another day’s question. Joy and Baltimore baseball have been companions estranged enough the past two seasons. For the time being, let the man and the team savour.