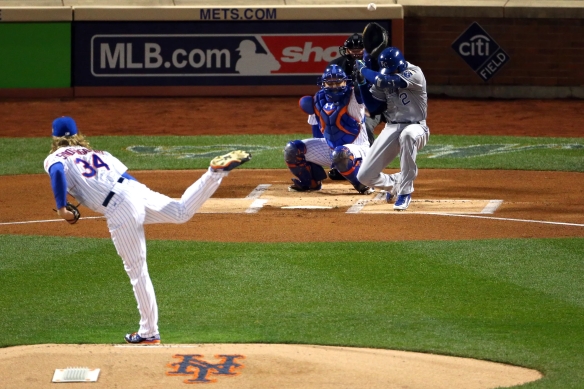 Met fans won’t forget Noah Syndergaard dropping Alcides Escobar to open Game Three of the 2015 World Series. Now the talented but oft-injured Syndergaard will be an Angel because the Mets’ administration slept at the switch after making his qualifying offer.

Go ahead and cling to the surface look if that’s your preference. Cling to the Mets showing Noah Syndergaard a qualifying offer and Syndergaard electing instead to let the Angels seduce him for a couple of million dollars more for next year, if it makes you happy. Cling to the narrative that Syndergaard’s heart with the Mets could be bought, if you must.

But now you must ask yourself concurrently just why it was that Syndergaard’s Mets heart was abandoned while the Angels swept in and swept him off their feet. Your answer is no further than New York Post writer Joel Sherman, who says the Angels had a plan for the power-pitching righthander coming back from Tommy John surgery—and the Mets apparently lacked one.

Oh, sure, the Mets plan to win if they can help it. But that’s it. When they tendered Syndergaard his qualifying offer, that was it, too. They had no general manager at that moment. They had no manager. They still don’t. They’ve got a pitching coach, Jeremy Hefner.

Syndergaard wanted a plan. Minasian high tailed it to New York to present him one. “[F]or the best organizations these days preparing pitchers physically, for the season and for each game, is a collective effort across multiple departments,” Sherman writes.

There were efforts in the first year under [Steve] Cohen’s ownership to bulk up these areas, but [the Mets] still pale in comparison to clubs such as the Dodgers, Giants and Blue Jays, among many others.

Minasian . . . came to New York armed with details on, among other things, how his club would have him pitch to individual players on each team in the AL West. He spoke of the success the Angels enjoyed last year with a six-man rotation, which helped get Shohei Ohtani through a season of hitting and pitching healthy. Minasian said the plan would stay the same and showed Syndergaard how pitching in a six-man rotation would give more time for recovery and lower his overall inning total when all he had in 2020-21 in the majors was two one-inning stints to close out the past season. Minasian brought data to show what the Angels liked about his delivery and pitch mix and how to make them even more effective.

In other words, Minasian caught the Mets sound asleep at the Syndergaard switch. While the Mets just slid a qualifying offer under the righthander’s nose with nothing substantial behind it to show him anything resembling love or respect, the Angels’ GM—who goes back with Syndergaard to the Blue Jays, having been part of their drafting team when they first picked him—brought all three. Love, respect, and substance.

Minasian also brought it with the most aggressive and committed push among several contenders for Syndergaard’s prove-it season, including the world champion Braves, the Red Sox, and the Jays.

Sherman notes that the Angels weren’t exactly thrilled about having to lose a draft pick for signing Syndergaard, but they were less thrilled than that about the prices in the free agency starters’ store—and starting with a Syndergaard whom Minasian knew well enough would give them decent odds in the upside department before pondering another starter or two on that market

The Angels’ seduction, Sherman writes, mattered as greatly as the Mets’ apparent lack of it: “Syndergaard is going to pitch at 29 this year. He recognizes how vital it is that he performs well to set himself up to re-enter the market next year at 30 to try to score a lucrative, long-term pact. And here were the Mets not even talking to him throughout this process. Here they were without an infrastructure in place. Here they were unable to provide a detailed plan to him beyond the big picture that Cohen wants to win now.”

The Mets hired former Angels GM Billy Eppler—Minasian’s immediate predecessor—as Syndergaard’s deal with the Angels came forth. This can be called crossing one end of the street without bothering to see who’s coming down the block from the other end. This can also be called too little, too late. This can be called, further, that’s still so Mets.

Leaving Mets fans with memories of a stout, tenacious pitcher who could be lights out when healthy and who gave them one whale of a performance in the 2015 World Series: Syndergaard dropping plate-crowding, plate-overcomfortable Royals shortstop Alcides Escobar to open Game Three, the only game in the Series that the Mets’ then-porous defense couldn’t cost them.

God knows the Angels themselves need a starting pitching overhaul—again. If a year’s worth of Syndergaard at minimum helps it begin, the deal will have been worth it. If Minasian’s plan for him works well enough, the Angels might think of extending Syndergaard or Syndergaard will have a solid market when he hits free agency next winter.

If losing Syndergaard now means a swift enough kick to the Mets’ posterior on behalf of shaking them further out of their funk before and after any possible lockout, it might be worth it, too. Eppler’s hiring to the contrary, with these Mets that’s a glandular if.