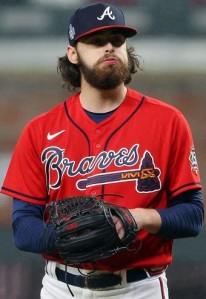 Ian Anderson—If you can’t do both, what’s your real choice . . . trying to make history, or trying to take a World Series advantage?

He faced eighteen batters and threw eleven first pitch strikes. He also threw about as many balls as strikes; 39 strikes out of 76 pitches, meaning one more strike than ball Saturday night. While he was at it, he and his batters wrestled to seven full counts.

You still want to yell at Braves manager Brian Snitker for hooking Anderson after a measly five innings? You might actually have ended up yelling at Snitker for leaving Anderson in an inning too long if he waited until Anderson took that kind of balance into the sixth.

You might be flooding social media with demands for Snitker’s summary execution on the spot, instead of celebrating the Braves taking a 2-1 Series lead with a 2-0 combined two-hit shutout during which four innings separated the Braves’ only runs.

You might forget how much you were touched by that sweet pre-game ceremony doing the late Hall of Famer Henry Aaron honour, especially knowing that Astros manager Dusty Baker was mentored and befriended by Aaron when he first arose as a Braves outfielder over four cups of coffee before slotting in full in 1972.

You might forget what sad fun it was to hear the Truist Park audience serenading Astros second baseman Jose Altuve and third baseman Alex Bregman with chants of “cheater! cheater!” when they batted in the top of the first.

Fun because at least the crowd saved it strictly for two of the five remaining Astrogate team members. Sad because nobody’s really processed yet what Andy Martino isolated in Cheated: The Inside Story of the Astros Scandal and a Colorful History of Sign Stealing: Altuve actually spurned the illegally-stolen signs and even demanded whomever transmitted them with the trash can bangs to knock it the hell off when he was batting.

You might forget Anderson and Astros starter Luis Garcia having a fine pitching duel between them, until Braves third baseman Austin Riley—with Eddie Rosario (one-out walk) and Freddie Freeman (base hit lined over unoccupied shortstop defying a defensive overshift) aboard—ripped one inside the third base line, past a diving Bregman, and down the line further for an RBI double in the bottom of the third.

You might forget the Truist Park organist having a little cheerful troll when Garcia batted with one out in the top of the third . . . giving him “Rock-a-Bye Baby” for walkup music—a neat little salute to Garcia’s baby-rocking arms motion before he goes into that little back-and-forth salsa step to deliver to the plate. Garcia’s tiny little grin over the serenade? Priceless.

You might forget that the would-be no-no got broken up in the top of the eighth, with Tyler Matzek on the bump for the Braves, when Rosario scampering in from deep left field positioning and Braves shortstop Dansby Swanson scampering out managed to let pinch hitter Aledmys Diaz’s somewhat shallow pop fly hit the wet grass with a thunk! Most likely, because Swanson didn’t want to plow Rosario even if either one could have caught the ball clean, and Rosario didn’t want to plow Swanson thinking the shortstop couldn’t hear him call for it. Oops.

You might forget Braves catcher Travis d’Arnaud with one out in the bottom of the eighth, turning on Astro reliever Kendall Graveman’s unsinking sinker and sinking it over the center field fence.

You might also forget the Astros living up exactly to one of now-retired Thomas Boswell’s best arguments on behalf of the universal designated hitter, with the Braves at the plate with two out in the bottom of the second, and the DH still unavailable to either side in the National League ballpark.

D’Arnaud smashed Garcia’s full-count fastball high off the right field wall for a double. With Anderson on deck, the Astros handed Swanson an intentional walk and—what do you know—struck Anderson out to end the inning. Now, what was that Boswell wrote in February 2019?

It’s fun to see Max Scherzer slap a single to right field and run it out as if he thinks he’s Ty Cobb. But I’ll sacrifice that pleasure to get rid of the thousands of rallies I’ve seen killed when an inning ends with one pitcher working around a competent No. 8 hitter so he can then strike out the other pitcher. When you get in a jam in the AL, you must pitch your way out of it, not ‘pitch around’ your way out of it. 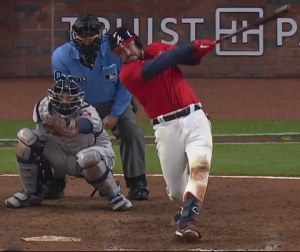 Swanson’s not exactly tearing it up at the plate in the Series; his .417 Series on-base percentage is the product of three walks to go with his two hits in twelve plate appearances. Would someone care to explain why the Astros pitched around a comparative spaghetti bat with four strikeouts in the Series to get to that dangerous, .054-hitting pitcher looming in the on-deck circle?

You want to yell at either Game Three manager, you might want to bark at Baker. Garcia probably had a great shot at getting rid of Swanson and assuring himself of an easy inning-opening out if Anderson and his pool-noodle bat were due to lead off the bottom of the third.

See the fun you’d have forgotten about if you’d decided putting Snitker on trial for hooking Anderson after five no-hit innings that rank as some of the sloppiest no-hit innings you might ever have seen? That’s assuming you were actually watching the game and paying close attention to the pitches instead of thinking “no-hitter!” without taking your eye and mind deep.

“He walked down and said, ‘That’s it. Heck of a job’,” Anderson said postgame about his removal. “You feel a little bit of, I had more to give, but it’s something that you understand and move forward . . . I knew he wasn’t going to budge. We’re very fortunate to have him, and the way he treats us is phenomenal. He’ll shake your hand after every outing, good or bad, and that goes a long way.”

It’s not as though Snitker made the move purely driven by those pesky (to you) analytics, either. “He was throwing a lot of pitches in the top half of that lineup,” the manager said post-game. “I thought the fourth inning he really had to work hard to get through that. He had a really good fifth inning. And then I told him because he was like, ‘Are you sure? Are you sure?’ But I was just like, ‘Ian, I’m going with my gut right here. Just my eyes, my gut’.”

Oho, but what about those upcoming bullpen games necessitated by the broken leg taking Charlie Morton down when he might have been available to start Game Four or Five without it?

“I just thought at that point in time, in a game of this magnitude and all, that [Anderson] had done his job,” Snitker said. “And we had a bullpen that all the guys we use had two days off, and they were only going to pitch an inning apiece, and that made them available for the next two games after if it went south.”

Four innings of shutout, three-strikeout, no-walk, two-hit relief by Matzek, AJ Minter and Luke Jackson preceding him, and Will Smith following with a three-lineout ninth shaking Bregman’s leadoff single to one side, kept things from going south.

So now Snitker has to crank the mental gears up a little further until he can have Max Fried back for Game Five? He’s probably had to crank them up further for more ticklish situations than this. Like his outfielder Joc Pederson, Snitker prefers to cast pearls before swine—or anyplace else he can think to cast them.

Go ahead. Rant your heads off about hooking Anderson with a freaking no-hitter going after (despite) five sloppy innings’ work. We’d all have loved to see it continue. We’d all have loved to see the Braves finish the combined no-no. Nobody would reject a clean shot at further history made—it would have been the third no-no in postseason history and the first such combined no-no at once.

Anderson made his history as it was. He was the first rook to throw five no-hit World Series innings in 99 years. He can dine out on that for the rest of his life.

But isn’t a Series advantage the better option?