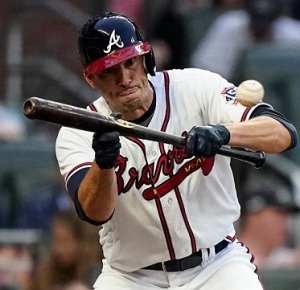 Charlie Morton, a pitcher who thinks his breed at the plate, instead of throwing to it, is a waste of lineup slot.

Guess what you didn’t hear if you watched the World Series on Fox Sports Friday night. You didn’t hear as much about what happened in the bottom of the second as you should have heard. More’s the pity.

Right then, right there, in Truist Park, in Game Three, occurred a textbook example of what can happen when the life of a rally may depend upon a) a pitcher with a pool noodle for a bat looming on deck; or, b) that pitcher having to swing his pool noodle bat when there’s a chance to put runs on the scoreboard.

Braves catcher Travis d’Arnaud was on second with a two-out double. The Astros ordered starting pitcher Luis (Rock-a-Bye Samba) Garcia to signal the intentional walk to Dansby Swanson. (Remember, you don’t have to make the pitcher throw four wide ones for the free pass anymore, which is a good thing for not adding wear on the arm.)

Looming on deck—Braves starter Ian Anderson. Rookie. Promising young pitcher, but swings a bat that might as well have been made by Ronzoni. Hit 54 cents on the regular season, hit zipadee-doodah in the postseason approaching the plate now. The net result? Garcia struck him out to end the threat and the inning.

Neither Fox broadcaster Joe Buck nor John Smoltz—the Hall of Fame pitcher who pitched many a splendid game for the Braves in his career—spoke much if at all about the deeper significance of Anderson’s wasted plate appearance.

Oh, they’ve mentioned the coming of the universal DH, which is liable to begin next season, but if you were looking for the deep take you didn’t really get it. Especially from Smoltz, a pitcher who finished his career with a .159/.226/.207 slash line at the plate. They spoke more of Anderson having the maturity of a 65-year-old in his demeanor than they spoke of what his second inning plate appearance really indicated.

This year’s pitchers batted a whopping .110 with a .150 on-base percentage. Since the last decade of the dead-ball era, they’ve batted .162. It has been, it is, and it’ll always be the single most guaranteed lineup waste in baseball. It isn’t even close.

“For every Adam Wainwright,” Braves manager Brian Snitker said before Game Three, “there’s ten [pitchers] that can’t hit. They don’t hit anymore at a young age, they’re specializing in pitching or whatever at a young age, so after experiencing it last year, I’m all for the DH.”

Wainwright is the Cardinals’ grand old man who’s actually batted .193 in sixteen seasons to date, including ten home runs and 51 total extra-base hits over the span. For a pitcher, that’s splendid and outlying plate production, in most generations. He’s even managed to knock 75 runs home.

It’s a wonder Wainwright doesn’t threaten first degree murder every time he has to bat—he lost a full season of his career to an Achilles tendon injury incurred . . . running the bases.

You want to ask Smoltz’s longtime, Hall of Fame rotation mate Tom Glavine about it? The New York Times did. “Take the brutality, so to speak, of what pitcher hitting has become, and I still feel like it allows for way more strategy in the National League,” lamented the .203 lifetime-hitting lefthander. “I’m hoping that that part of the argument will certainly be a strong one, but it seems now that there’s more momentum than ever to get rid of it.”

The brutality of what it has become? How about the brutality of what it always was? Then-Pirates owner William Temple Chase wasn’t just talking to hear himself talk when he lamented his five main 1891 Pirates’ pitchers hitting .165 as a group and proposed that off-season that the game should adopt what we know as the designated hitter. (It failed by a single vote.)

“Every patron of the game is conversant with the utter worthlessness of the average pitcher when he goes up to try and hit the ball,” said the ancient paper Sporting Life in agreement with Temple. “It is most invariably a trial, and an unsuccessful one at that. If fortune does favor him with a base hit it is ten to one that he is so winded in getting to first or second base on it that when he goes into the box it is a matter of very little difficulty to pound him all over creation.”

“I’m not going to sit here and tell you I was a great hitter,” Glavine continued, “but as a pitcher, I was certainly a good hitter, and I felt like my ability to do that was an advantage every time I went out on the mound. I wasn’t necessarily going to get an RBI base hit or whatever, but I knew two things: Number one, if I had to bunt, I was going to get the bunt down, and number two, I wasn’t going to be an automatic out.”

Glavine was an out for 80 percent of his lifetime plate appearances. Getting the bunt down simply meant that thirteen percent of the time he was a wasted out while he and his Braves and Mets were at it. How is a pitcher bunting not normally an automatic out, anyway? Beating those bunts out for base hits isn’t exactly a constant thing with them, either.

How about if the National League had taken its head out of its colon in the first place—pitchers wouldn’t have to worry about wasting outs, and managers wouldn’t have to watch helplessly when their pitchers a) ended rallies, or b) injured or winded themselves running the bases on the rare occasions when they picked up base hits.

This time, I won’t apologise for beating a dead horse, because in this case the horse was and remains right, and the bottom of the second in Game Three Friday night proved it.

“It’s fun to see Max Scherzer slap a single to right field and run it out as if he thinks he’s Ty Cobb,” wrote now-retired Thomas Boswell in 2019. “But I’ll sacrifice that pleasure to get rid of the thousands of rallies I’ve seen killed when an inning ends with one pitcher working around a competent No. 8 hitter so he can then strike out the other pitcher. When you get in a jam in the AL, you must pitch your way out of it, not ‘pitch around’ your way out of it.”

If and when he does it, that is. Scherzer was 0-for-2021 at the plate, including four hitless postseason plate appearances and one sacrifice fly that doesn’t count as an “official” at-bat in the scoring. Forget Ty Cobb, Max the Knife didn’t even get to run it out as if he thought he was Ralph Kramden.

The word also is that, when the owners and the players start talking turkey to work out the next collective bargaining agreement, they may consider allowing the universal DH—at a price: the owners and commissioner Rob Manfred may actually demand that a team surrender its DH for the rest of the game unless their starting pitchers go a minimum number of innings.

Brilliant. As if the three-batter minimum for relief pitchers hasn’t screwed things up enough often enough? (Not just because too many managers are leaving them in beyond the third batter with opposing rallies in the making, either.)

Suppose they do impose a six- or seven-inning starters’ minimum in return for the universal DH. What happens to every starting pitcher who has a bad start and gets shot early, often, and full of more holes than a hanging target in a police shooting range?

Forget about blowing the poor sap’s ERA to infinity and beyond. You’re going to force him to stay in for a minimum six- or seven- and maybe sink his team so far that the Navy SEALs couldn’t get them out alive?

Baseball’s the thinking person’s sport. Those who govern and play it should start thinking again. At least one starting pitcher now lost for the rest of the World Series does some thinking.

“I’m always late to the on-deck circle, just because I need to unplug for a minute, and I like to worry about the job that I have to do on the mound,” said Braves pitcher Charlie Morton to the Times. “That’s what I’m paid to do, that’s what I’m prepared to do, spend the vast majority of my time doing. They’re paying guys lots of money and guys are working their tails off trying to be good hitters, and I’m up there taking at-bats.”

They used to say a player’s only as smart as his batting average. Morton’s a Ph.D. better than his lifetime .127 average.