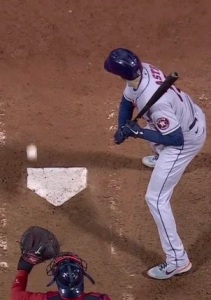 What should have been strike three, side retired, game tied in the top of the ninth in Boston Tuesday night . . .

Well, that may depend among other things upon who’s calling balls and strikes in either set’s remaining games. Because the rule book third strike that should have been called in the top of the ninth in Fenway Park didn’t send the Red Sox tied to the bottom of the ninth with yet another chance to walk off a postseason win.

Reality check. There were bad pitch calls in both NLCS Game Three and ALCS Game Four. Against all sides. There didn’t seem any particular favour or blessing bestowed particularly upon the Braves and the Dodgers out west or the Astros and the Red Sox back east.

When Laz Diaz called ball two on what even Ray Charles would have seen was strike three to Astros catcher Jason Castro, side retired, it might not necessarily have opened the door to that fresh Red Sox walkoff win. But they should have had the chance to try. Or at least to send the game to extra innings.

Red Sox pitcher Nathan Eovaldi, who’d pitched well enough in Game Two and should now have retired the side in Game Four’s top of the ninth, admitted postgame he thought he’d nailed the punchout. “I thought it was a strike,” the stout righthander said, “but again, I’m in the moment. I’m trying to make my pitches. I’m attacking the zone.”

Castro hinted that he, too, thought he was frozen alive in his own postgame comment. “Where that pitch started,” he said, “I didn’t think it was one I could pull the trigger on. It was a ball, then I was able to move on to the next pitch.”

He moved on to foul the next pitch off, rap a single the other way to right field sending Carlos Correa (leadoff double) home with the tiebreaking run, and leave the vault open for a walk and Eovaldi’s exit in favour of Red Sox reliever Martin Perez. The vault stayed unguarded for a three-run double (Michael Brantley), a free pass (to Alex Bregman), two RBI singles (Yordan Alvarez and Correa batting the second time in the inning), another RBI single (Kyle Tucker), and an inning-ending fly out (Yuli Gurriel).

The Red Sox and the Astros kept things to a 2-1 Red Sox lead until Jose Altuve tied it with a home run in the top of the eighth. Neither team hit particularly well against either Red Sox starter Nick Pivetta or each other’s bullpens until then. The Red Sox also led the entire Show in comeback wins on the regular season.

They didn’t have any similar self-resurrection in them in the bottom of the ninth.

Astros reliever Ryan Pressly surrendered a pair of two-out singles (Kike Hernandez, Rafael Devers), saw Castro let a pitch escape into a passed ball setting up second and third with two outs—a situation in which the Red Sox are customarily dangerous—but strike Xander Bogaerts out swinging for the 9-2 Astros win and ALCS tie.

Diaz blew 23 pitch calls Tuesday night, according to ESPN Stats & Info and cited by ESPN columnist Jeff Passan. He blew twelve thrown by Red Sox pitchers and eleven thrown by Astros pitchers. “[T]he one everyone— at least everyone in Boston—is going to remember,” Passan said soberly, “is the Nathan Eovaldi curve.”

“Good teams adjust to the ump,” snorted a followup tweeter. We’ll assume that tweeter couldn’t care less about getting it right by, you know, the actual rule book, even when a side should have been retired or when championships or progress toward them are on the line squarely enough.

To think that the Dodgers thought they’d stolen the day’s headlines, in Dodger Stadium far earlier, when they spent most of NLCS Game Three missing no opportunities to miss opportunities, until—standing five outs from season over—Cody Belllinger hit a three-run homer, before a base hit and a ground out set the table for Mookie Betts’s tiebreaking and ultimately game-winning RBI double.

And, for Kenley Jansen to strike out the side in the top of the ninth to secure the 6-5 Dodger win.

Just like that, the Dodgers taking the early 2-0 lead on (stop me if you heard this after Game Two) Corey Seager’s first-inning two-run homer, the Braves tearing Dodger starter Walker Buehler apart for four runs in the top of the fourth, then the Braves tacking a fifth run onto the board against reliever Ryan Bickford in the top of the fifth, seemed a pleasant memory. Even if the Braves still have a 2-1 NLCS lead.

“Does this feel like a dagger?” Jackson asked postgame. Then, he answered. “No. This is just, you know, a speed bump.” Ordinary speed bumps in ordinary roads don’t destroy undercarriages as broadly as Bellinger and Betts destroyed the Braves Tuesday afternoon.

To hear Bellinger say it, it’s just hard to imagine a tougher hit. “Yeah, it’s not a hitter’s pitch right there,” he said postgame. “But in the moment, whatever happened, I saw it and I just tried to put the barrel on it and continue to pass the baton.” He passed the baton, all right, and Chris Taylor swung it for a followup single to chase Jackson in favour of Jesse Chavez.

There’s a story in and of itself. Chavez warmed up but finally sat back down in the Braves bullpen three times earlier in the game, before he was up and throwing in the eighth yet again. He probably threw the equivalent of a quality start’s worth of pitches in all four warmup. He managed to induce the second Dodger out on pinch hitter Matt Beatty’s grounder.

He lived long enough for the Mookie Monster to split the right center field gap on the first pitch, sending Taylor home with the sixth hard-won Dodger run of the day. If you can tell me what’s brilliant about warming up and sitting down a pitcher three times before warming him up yet again, then bringing him in as gassed as the day is long, you’re a better manperson than I.

Well before Eovaldi threw the third strike that wasn’t, longtime Boston Globe scribe turned MLB Network analyst Peter Gammons tweeted, “the best interests of baseball does not not include Laz Diaz theoretically trying to call balks and strikes in post- season.” Grammatical flaw and malaprop to one side, Diaz didn’t try even theoretically but failed factually 23 times.

Jerry Meals wasn’t exactly a virtuoso behind the plate so far as both the Braves and the Dodgers were concerned. But he didn’t blow the third strike that should have retired a side with a League Championship Series game tied to the bottom of the ninth, either.

“I don’t know how he did it,” said Correa of Castro finally singling him home with the tiebreaker, “but I admire that. Because I will tell you I wouldn’t be able to do that. Sitting down for that long and then going out there facing a guy throwing 100 in crunch time? That’s special.”