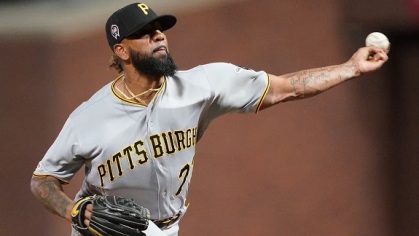 Vazquez’s too-prominent tattoos identified him when his face couldn’t in messages he sent an underage girl.

Two seasons ago, Felipe Vazquez was the arguable best pitcher on the National League’s arguably most dysfunctional team. The lefthanded closer on the National League Central’s bottom-feeding Pirates was having a career year and his second consecutive All-Star season when he got clipped over his apparent taste for and sexual misconduct with at least one underage girl.

When Vazquez was arrested on 17 September 2019, the charges came from two places. From Pennsylvania, charging him with statutory sexual assault, unlawful contact with a minor, corruption of a minor by a suspect eighteen or older, and indecent assault of a victim under sixteen. And, from Florida’s Lee County, charging him with computer porn–soliciting a child and providing obscene material to minors

Now Vazquez stands convicted of fifteen counts involving statutory sexual assault, sexual abuse of children, and child pornography in Westmoreland County, Pennsylvania. A jury handed the verdict down on Thursday after needing just four hours to determine they didn’t buy Vazquez’s defense argument that his thirteen-year-old victim misled him about her real age.

“I felt we put on a very strong defense,” said one of Vazquez’s attorneys, Gary Gerson, to Pittsburgh’s CBS affiliate KDKA. “Obviously, the jury disagreed. I’m not sure exactly what their assessment of the case was. But it appears to be that they have concluded that Felipe had a mistaken belief but it was not reasonable.”

On the trial’s fourth day, prosecutors argued Vazquez’s accuser was a minor at the time and remains one at age seventeen, with Vazquez interested not in a real relationship but in self-gratification, KDKA said. As if to emphasise the age point at the time she encountered Vazquez, they presented the jury with images of her.

Vazquez himself testified on Wednesday. KDKA said the pitcher told the court his dealings with the girl started with innocent social media conversation before things “began to veer toward adult topics.” He also testified that he’d asked her to give proof of her claimed legal age to avoid trouble, adding she sent what appeared a Pennsylvania identification card showing her of legal age.

KDKA added that he told the court he’d “had intimate relationships with other female followers and fans.”

The girl herself testified earlier in the trial. KDKA said she admitted not knowing whether Vazquez knew she was only thirteen when they first mat on social media, and she affirmed telling her mother when a police interview paused that she should have been the one in trouble.

Maybe the jury came to believe that Vazquez as a then 26-year-old professional baseball player was more than old enough to know better himself. MLB actually sent him the same message when they put him on its restricted list practically as soon as his arrest finished being processed.

The Pirates also wasted no time banishing him to the Phantom Zone, after the team learned of the bust and both team president Frank Coonelly and then-general manager Neal Huntington called a team meeting before their scheduled interleague game against the Mariners. “By game time, looking around [PNC Park], it was as if Vázquez had never played for the Pirates,” wrote The Athletic‘s Rob Biertempfel.

His clubhouse locker was empty. His banner outside PNC Park had been taken down. His image was scrubbed from the scoreboard videos. His name was deleted from the list of National League save leaders that flashes on concourse monitors before the game. The scorebook magazines with Vázquez on the cover, which normally are handed out to fans as they enter the stadium, were stashed out of sight.

His 2019 arrest sent a far more dark cloud over a team of Pirates that was already battered by its own dysfunctional clubhouse. And “dysfunctional” may have been a kind way to describe things.

Another Pirate reliever, Keone Kela, instigated a wild bench-clearing brawl on the night of the non-waiver trade deadline, when he threw at Cincinnati’s Derek Dietrich—over a pair of April home runs one of which landed in the Allegheny River. The brawl was even more memorable for involving then-Red Yasiel Puig . . . who wasn’t yet aware he’d been traded to the Indians.

That year’s Pirates seemed to earn and rather relish a reputation for headhunting on the mound. But they also seemed too willing to brawl with each other when the occasions arose. The Dietrich drill happened a week before Kela was suspended two days over a confrontation he’d had with the Pirates’ performance coach Hector Morales, a confrontation requiring then-manager Clint Hurdle’s intervention.

When Hurdle did intervene, an exchange between skipper and reliever was called downright insubordination on Kela’s part by a few other Pirates. The manager who’d previously led the Pirates to a couple of postseasons before the team was said to have gone into the tank was canned after the season and elected to retire from baseball, but nobody to my knowledge has said whether 2019’s implosions factored into the latter decision.

That year’s Pirates also had to deal with suspending bullpen coach Euclides Rojas, over an argument with yet another Pirate reliever, Kyle Crick, who’d accused Rojas of giving Vazquez preferential treatment. Rojas ordered Crick to mind his own business none too politely, apparently. Biertempfel wrote at the time that another Pirate went to the team’s administration insisting Rojas get “the same level of punishment as Kela had.”

Kela is now with the Padres, his fine 2021 so far rudely interrupted by pitching forearm strain that’s turned into Tommy John surgery. Crick remains with the Pirates, with a somewhat deceptive 1.59 ERA as a middle reliever/setup man, considering his 3.49 fielding-independent pitching rate and his troublesome 4.8 walks per nine innings so far this season.

In case you wondered, too, Dietrich is now in the Yankees’ minor league system and Puig—who’s denied allegations in a sexual assault suit—is playing in the Mexican League after finding no MLB takes this winter and spring.

The Pirates are at the bottom of the NL Central again this season. So far. They’re 5-6 in their last eleven games, with back-to-back walkoff wins in there. Former Red Sox rebuilder Ben Cherington is now their general manager. The team has announced they’ll open PNC Park to full capacity by July.

Their current closer, Richard Rodriguez, has been off the charts thus far even with the Pirates at rock bottom: a 0.47 ERA/1.71 FIP, and though he’s not particularly a strikeout artist, he pitches like a man allergic to walks. (0.5 per nine innings so far.)

You hope only that Rodriguez and the rest of this year’s Pirates are likewise allergic to the kind of dysfunction that battered a 2019 edition finishing 22 games out of first in their division and climaxed with his predecessor’s sordid denouement.

Vazquez is set for sentencing in three months. Florida charges involving the same girl remain pending. The now-former pitcher could be looking at “decades” worth of imprisonment in the United States, unless the federal Immigration and Customs Enforcement agency elects to deport him home to his native Venezuela.

Vazquez’s nickname is Nightmare. But there’s another word for the man who took himself from a nightmare for opposing batters to a nightmare for an underage girl and her family. The word is degenerate.