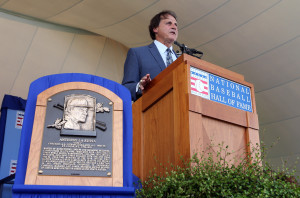 Even Hall of Fame managers aren’t always the geniuses they’re cracked up to be.

No baseball manager is a perfect specimen, whether he lucks into the job, performs it long enough and well enough, or gets himself elected to the Hall of Fame because of his actual or reputed job performance. Many have been the managers whose reputations for genius are out of proportion to their actual performances.

Even the certified geniuses made their mistakes. Maybe none was more truly egregious than Casey Stengel’s failure to set up his rotation so his Hall of Fame lefthander Whitey Ford could start three 1960 World Series games instead of two. Unless it was Tommy Lasorda deciding it was safe to let Tom Niedenfeuer pitch to Jack Clark, with first base open and the Dodgers one out from forcing a seventh 1985 National League Championship Series game.

Maybe it was Dick Williams, placing public perception ahead of baseball to start gassed ace Jim Lonborg instead of a better-rested arm in Game Seven, 1967 World Series. Unless it was Gene Mauch, the Little General panicking down the 1964 stretch (with the Phillies, using his two best pitchers on too-short rest and blowing a pennant he had in the bank), or in Game Five (with the Angels) when he was an out away from winning the 1986 American League Championship Series.

Regardless of his foibles since what proved his first retirement, Tony La Russa still has an outsize reputation as one of the most deft ever to hold the manager’s job. He’s been called a genius. He’s been called one of the smartest baseball men of the last half-century. They point to his Hall of Fame plaque, the 33 years he managed prior to returning to the White Sox this season, eleven division titles, six pennants, and three World Series rings.

Those plus his longtime reputation for volumnious pre- and post-game thinking and analysis (observed perhaps most deeply in a chapter of George F. Will’s Men at Work: The Craft of Baseball) still allow La Russa absolution from his most egregious errors.

He threw his 2021 White Sox star Yermin Mercedes under the proverbial bus, and maybe even invited the Twins to retaliate the following day, after Mercedes swung on 3-0 (violating La Russa’s fealty to the Sacred Unwritten Rules) in the eighth inning of a White Sox blowout, and hit a home run . . . off a middle infielder sent to the mound.

La Russa is still considered one of the smartest of the Smart Guys whatever they think of Mercedes’s homer or La Russa’s definition of “sportsmanship.” (They don’t always stop to ponder what La Russa thought of the Twins’s “sportsmanship” in giving up the ghost with two innings left to close even a fat deficit and sending a position player to the mound with real pitching still available to them.)

Perhaps they haven’t read Keith Law, writing in The Inside Game last year: “Sometimes you do all the right things and are stymied by bad luck. Other times you do everything wrong and are subsequently rewarded for it. That’s outcome bias.” There’s a case to be made that La Russa’s reputation, and maybe even his Hall of Fame case, is a little more than half a product of such outcome bias.

It’s hard to argue against a manager with three decades plus on his resume plus those division titles, pennants, and three Series rings. But maybe it’s easy to forget or dismiss how often La Russa either outsmarted or short-sighted himself when the games meant the absolute most.

“Tony, stop thinking,” Thomas Boswell wrote, after La Russa’s Athletics were swept out of a 1990 Series they could have tied in four and gone on to win, instead of being swept by a band of Reds upstarts who didn’t know the meaning of the words “shrink under pressure.”

La Russa could write a book on why did he did what he did. But the bottom line is that every manager in the Hall of Fame would have brought in the Eck. Twice Tony didn’t and twice the A’s lost. This time, the goat’s horns stop at the top.

Outcome bias didn’t help La Russa then, a year after he’d won his first Series. But it sure helped him after a 2011 Series he won despite himself. Because smart baseball men don’t do even half of what La Russa did to make life that much tougher for his Cardinals than it should have been. 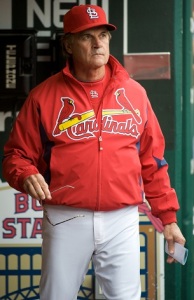 Smart baseball men don’t take the bats out of the hands of future Hall of Famers with Game One tied at zero. La Russa took it out of Albert Pujols’s hands by ordering Jon Jay to sacrifice Rafael Furcal, guaranteeing the Rangers wouldn’t let Pujols swing even with a swimming pool noodle, walking him on the house. (The next batter got lured into dialing Area Code 5-4-3.)

Smart baseball men don’t lift better clutch hitters (especially those shaking out as Series MVPs) with late single-run leads for defensive replacements who might have to try a lot harder to do the later clutch hitting with insurance runs to be cashed in—and fail. La Russa did that lifting David Freese (after he scored a single tiebreaking run) for Daniel Descalso (grounded out with two in the eighth) in Game Two.

Smart baseball men don’t balk when their closers surrender two soft hits in the Game Two ninth with a groin-hobbled bopper due up and a double play possibility very distinct. La Russa balked. He lifted Jason Motte for Arthur Rhodes with Josh Hamilton coming up. Rhodes gave the lead away and Lance Lynn gave the game away—on back-to-back sacrifice flies.

Smart baseball men don’t look past three powerfully viable and available bullpen options with their teams down a mere 1-0 and reach for . . . a known mop-up man, with the opposition’s hottest Series bat due up. La Russa learned or re-learned the hard way in Game Four. Mike Napoli thanked him for offering Mitchell Boggs as the sacrificial lamb—Napoli hit the first pitch for a three-run homer. (Final score: Rangers 4, Cardinals 0.)

Smart baseball men don’t snooze for even a moment and forget to flash the red light when their batter (Pujols, in this case) signals their baserunner Allen Craig to try for a steal in the Game Five seventh.  Craig got arrested by half a mile, inviting another free pass to the bopper and—following a base hit setting up second and third when the batter advances on the throw to third—another free pass and an inning-ending fly out.

Smart baseball men also don’t let a little (ok, a lot of) crowd noise interfere with getting the pen men up that he wants to get up in the bottom of the Game Five eighth—after ordering one relief pitcher tough on righthanded hitters to put a righthanded hitter aboard on the house, yet, instead of getting the second out—then try sneaking a lefthanded pen man past a righthanded danger who sneaks what proves a game-winning two-run double.

They don’t try to make the Case of the Tangled Telephone out of it, either, after they end up bringing in the wrong man when nobody claimed to hear them ordering the guy they really wanted to get ready. (La Russa wanted Motte but got Lynn. Oops.)

Neither do smart baseball men drain their benches in the eighth of even a do-or-die Game Six. La Russa did. It compelled his Cardinals to perform their still-mythologised ninth and tenth inning feats of down-to-their-final-strike derring-do without a safety net beneath them. Freese took one and all off the hook with his eleventh-inning, full-count, game-winning, Richter scale-busting leadoff bomb.

The Cardinals won that Series despite their skipper. (And, because they pinned the Rangers in Game Seven, after allowing a 2-0 first-inning lead on back-to-back RBI doubles. They made it impossible for La Russa to overthink/mis-think/mal-think again after they tied in the bottom of the first and scored four more from there.) La Russa was thatclose to blowing a Series his Rangers counterpart sometimes seemed to do everything within reach to hand him.

Fairness: La Russa did plenty right and smart winning those division titles. He did plenty right and smart winning the 2006 Series in five. (It didn’t hurt that he knew what he had turning his resident pest/Series MVP David Eckstein loose.) That was two years after nobody could have stopped the Red Sox steamroller from plowing the Cardinals in four, following their self-yank back from the dead to take the last four ALCS games from the Empire Emeritus.

But the 2011 Series got La Russa compared in the long term to . . . Bob Brenly, the Diamondbacks manager who won the 2001 World Series in spite of his own mistakes, too. Batting his worst on-base percentage man leadoff; ordering bunts ahead of and thus neutralising his best power threat; overworking and misusing his tough but sensitive closer, even throwing him out a second straight night after the lad threw 61 relief pitches the night before. (You’re still surprised Scott Brosius faced a gassed Byung-Hyun Kim and tied Game Five with a home run?)

Lucky for Brenly that he had one Hall of Fame pitcher (Randy Johnson) and another should-have-been Hall of Fame pitcher (Curt Schilling, his own worst enemy) to bail him out. Brenly hasn’t managed again since the Diamondbacks fired him during a 2004 skid to the bottom of the National League West.

When La Russa retired three days after that 2011 Series ended, he didn’t announce it until after the Cardinals’ championship parade and after he called a meeting with his players. “Some grown men cried,” he said of the meeting, adding, “I kind of liked that because they made me cry a few times.”

The smartest men in baseball with even half La Russa’s experience don’t invite comparisons to comparative newcomers who trip, tumble, and pratfall their way to World Series rings. Three Series rings keeps him a Hall of Fame beneficiary of the outcome bias Law described. It’ll probably keep La Russa cushioned with the White Sox for now, despite his early tactical mistakes.

And, despite the perception the Mercedes incident leaves that he’d rather burn his players in the public eye than handle real or alleged issues the mature way. (Name one manager who ever invited the other guys to retaliate for a real or alleged rookie mistake.) All that previous outcome bias won’t save him, if he costs himself his clubhouse and the White Sox turn from early-season surprise to season-closing bust.