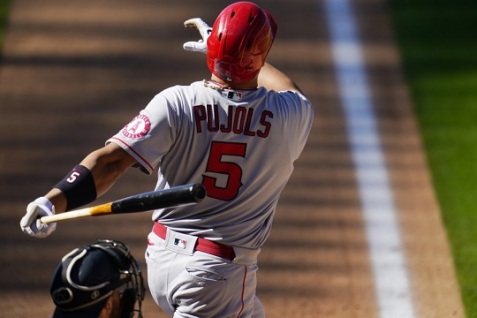 That was last fall: Pujols tying Willie Mays on the all-time home run list. This is Mays’s 90th birthday, today: the Angels announced they designated the sadly-declined Pujols for assignment.

Late in February, Albert Pujols’s wife posted a social media message suggesting that, when his mammoth contract with the Angels expired after this season, so would her husband’s playing career. That option may not belong to him anymore.

The Angels jolted baseball when they announced Thursday that they designated the Hall of Famer in waiting for assignment. Once upon a time, timing was Pujols’s ally at the plate and beyond. Announcing the designation on Willie Mays’s 90th birthday, of all days, just made it sting that much more.

It had to. No less than Mays himself sent Pujols a text message last year saying, “It’s your time now. Go get it.” Meaning, go meet and pass Mays’s 660th lifetime home run. Pujols met 660 last September and passed it with 661 five days later. The Machine had six more bombs in him before the Angels finally gave up his ghost.

Let’s get this out of the way right now: Pujols didn’t ask to have maybe the most heartsickening, prolonged decline in the game’s history.

It wasn’t his idea to have a down season his first time out as an Angel. (Codicil: a down season for Pujols in 2012 was still a career year for more players than you can fit aboard two Dreamliners.) He didn’t ask for plantar faascitis in his heel the following year to begin a punishing series of lower half injuries that drained everything he had left.

ESPN writer Alden Gonzalez, who’s covered Pujols for most of his Angels life, saw up close and personal what Pujols put himself through in what we now know was a futile attempt to find the St. Louis smash buried somewhere inside what was left of him now.

“I’ll remember,” Alden says, “that even though his lower half was shot and he wasn’t quick enough to get around on the devastating stuff pitchers throw these days, he still showed up early, still spent hours in the training room to get ready for games, still took batting practice with intent, still crouched really low on defense and still looked for any opportunity to take an extra base. He might not have been productive, but it wasn’t for lack of effort.”

The stubborn, proud spirit was too willing, but the body was likewise too ready to tell him where to shove it at long enough last. No recent play was more emblematic than the ground ball he hit to the hole at shortstop but didn’t run out—because he couldn’t. He’d have been better off taking a skateboard out of the box up the line; he was thrown out on a lob across the infield before he was even halfway up the line.

The only tool Pujols’s body left alone was his still-devastating long ball power. Gonzalez’s ESPN colleague David Schoenfield is right to observe that’s not enough to stay aboard a major league roster. Not even though Pujols remained mostly as difficult to strike out as he always was. (His average per 162 games: 74; or, a single punchout every other game.)

But he’s all but quit taking walks; he rarely hits for extra bases beyond home runs; and, no matter how ironed up his will is, he hasn’t been the first base defender he once was for what seems eons. His Cardinals era was off the charts enough to keep his lifetime statistics showing him a plus first baseman by 95 runs saved above his league average. Fortunately.

Aside from what it did to him as a man, Pujols’s injury-instigated and perpetuated decline robs him of sitting atop the rest of the Hall of Fame’s post-World War II/post-integration/night-ball era first basemen according to my Real Batting Average. (Total bases + walks + intentional walks + sacrifice flies + hit by pitches, divided by total plate appearances.)

Had his career ended when his years with the Cardinals did, Pujols would have retired with a .708 RBA. Had he not been betrayed by his heels, feet, and most of the rest of his lower body as an Angel, he might still have finished with a higher RBA than Jim Thome did. And none of those Hall of Fame first basemen are as far above their league average for runs saved at the position as Pujols. (Eddie Murray’s +61 are 34 below Pujols.)

Pujols’s berth in Cooperstown is solely a question of when he retires as a player officially. No matter how sad his injury-instigated, protracted decline, he secured that in St. Louis to devastating effect. If the Angels don’t work a trade out now, and there’s no assurance they’d find a trading partner willing to part with viable talent in exchange for a ghost, there’s no guarantee another team would sign him for a pro-rated minimum salary as a free agent, either.

His longtime Cardinals manager Tony La Russa came out of his Hall of Fame retirement to take on the White Sox—but La Russa has already shown trouble handling today’s experimental rules as it is. No matter how much he still respects and loves Pujols, La Russa isn’t going to convince his bosses to take the ghost over young and establishing designated hitter Yermin Mercedes.

The DHs in Tiger uniforms are hitting this year at levels low enough to make Pujols continue resembling his Hall of Famer-to-be old self—but the Tigers have an aging incumbent themselves, named Miguel Cabrera. Hands up to anyone and everyone who thinks that even the current Tiger regime would hold with manager A.J. Hinch sending Cabrera to the pine in favour of Pujols now.

Purely in baseball terms, designating Pujols for assignment makes too much sense. Especially with Jared Walsh standing in for injured right fielder Dexter Fowler but far better suited to play first base. Especially with Shohei Ohtani more than capable of holding a DH slot on the days he doesn’t pitch. Pujols’s designation means the Angels don’t have to let Ohtani bat on his pitching days; they can save him for the final role Pujols can’t handle anymore.

But in human terms, this is a heartbreak. Especially for a man so community and charity oriented that you could believe the Angels well enough, even committing boilerplate, when owner Arte Moreno’s formal statement praised Pujols in character terms, as a man whose “historical accomplishments, both on and off the field, serve as an inspiration to athletes everywhere, and his actions define what it means to be a true superstar.”

If only the announcement didn’t have to happen on the 90th birthday of Mays, a man Pujols respects and maybe even loves almost as much as he loved and respected St. Louis icon Stan Musial. This may have been the worst case of bad timing in baseball since . . .

When Hall of Fame pitcher Tom Seaver was traded to the Reds from the Mets, following contract extension talks that went from difficult to scurrilous thanks to Mets management and certain sports columnists smearing him, A. Bartlett Giamatti—then president of Yale University, as opposed to his eventual higher calling as a baseball commissioner—wrote in Harper’s, “[A]mong all the men who play baseball there is, very occasionally, a man of such qualities of heart and mind and body that he transcends even the great and glorious game, and that such a man is to be cherished, not sold.”

If Giamatti had lived to see Pujols, he might have thought likewise, ending with “such a man is to be cherished, period.” Pujols wasn’t sold, but half his body sold him out. Whether you called him El Hombre (the nickname he hated, insisting there was only one Man and his name was Musial) or The Machine (La Maquina in his language), he didn’t deserve having his gears stripped into a long, painful, sad decline.