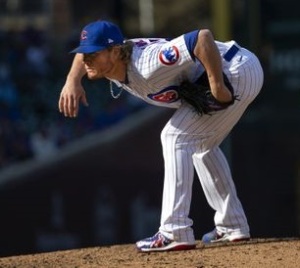 Kimbrel still resembles the old TWA terminal at JFK Airport when he leans to take his signs—but so far he doesn’t resemble the guy who used to force the crash carts on immediate standby.

Ordinarily, a week-old season wouldn’t (shouldn’t) have you either pushing panic buttons or awarding pennants before they’re actually won. Enough fans and social media crawlers hoist up the earliest numbers as though they’re final revelation or final condemnation.

But there’s a spectre haunting no more, for three games worth of the new season, anyway. Craig Kimbrel—the closer whose “saves” too often involved tempting, not being tempted by the devil—is not a spectre any more.

So far. Any temptation the Cubs have had to keep the crash carts on double-secret red alert whenever they’ve had to reach for him is quelled.

The Cubs won Kimbrel’s first two gigs and lost the third through no fault of his own: he worked a spotless ninth, but Brandon Workman came on to pitch the tenth and surrendered a three-run homer for which the Cubs had only an RBI single to answer in the bottom for the loss.

Kimbrel has only one save to his credit for his early effort, simply because in his first gig against the Pirates the Cubs handed him a four-run lead to protect. Kimbrel not only treated his assignment as though the entire fate of the Cubs rested on it, he struck out the side with every batter facing him looking at strike three.

For a moment or two you could have sworn you’d heard assorted Pirates muttering to themselves that they couldn’t reconcile this to the guy who’d become infamous a couple of postseasons ago for running up cardiac surgeons’ bills.

In the second Pirate gig, well, yes, these are still the Pirates, but the Cubs handed him a mere one-run lead to protect. The kind of narrow lead with which Kimbrel once raised temperatures if not blood pressures the moment he arrived on the mound.

He struck Michael Perez out swinging on 2-2. He caught Anthony Alford looking at a full-count third strike. He got Wilmer Difo to line out to shortstop on 0-2 for the side and the game.

“It’s too early to definitively say that Kimbrel is back to his old self after struggling in 2019 and 2020,” says RotoWire, “but it’s certainly encouraging to see him get off to a good start.” They only left out 2018’s postseason. The one which “struggling” didn’t even begin to describe.

When Worcester Telegram writer Bill Ballou first threatened not to vote for Mariano Rivera for the Hall of Fame (under protest ferocious enough he changed his mind), his initial defense included Kimbrel’s incendiary 2018 postseason performances: “When he pitched,” Ballou wrote, “Boston’s victories felt like defeats. In 10-2/3 innings he had an ERA of 5.90, and permitted nineteen baserunners. He was also six for six converting saves — a perfect record.”

That was then, when the Red Sox managed to win the World Series decisively enough, if now controversially enough. This is now: So far this season, Kimbrel resembles the kid howitzer who had a 1.43 ERA, a 1.52 fielding-independent pitching rate, a 14.8 strikeouts-per-nine rate, and a 266 ERA+ in his first four seasons, with the Braves.

“His presence on the mound, throwing strikes, being really aggressive with the heater — that’s Craig Kimbrel,” says Cub center fielder Ian Happ. The knuckle curve he works in isn’t exactly flat or hesitant so far, either.

“My first two appearances have been good,” Kimbrel said after his second dispatch of the Pirates. “I’ve successfully hit my spots and executed pitches how I wanted to. The life and movement on my pitches have definitely been there and with that, I’ve had some success.”

He also said having a normal spring training—as opposed to last year’s pan-damn-ically enforced quick “summer camp” and, more markedly, his midseason 2019 signing that compelled him to try rushing into form, doing him and the Cubs few favours—mattered this time around. It enabled him to iron out the knots without putting himself on the rack.

“I had an opportunity to get into games and work on things without the runs mattering,” he said, “and being more concerned on getting out there and executing what I was trying to do gameplan-wise each and every time instead of worrying about how many runs are getting across the plate. That was definitely helpful. As we saw at the start of spring training, [I] gave up some runs, gave up hits and as we went, I was able to throw more strikes and miss more bats. It was a good six weeks and we’ve gotten off to a pretty good start so far.”

That’s far, far, far away from the look he left after Game Four of the Red Sox’s 2018 division series triumph over the Yankees in four games. When he walked Aaron Judge on four pitches to open that ninth, surrendered a base hit (Didi Gregorius), struck Giancarlo Stanton out, but walked the bases loaded (Luke Voit) and hit Neil Walker with the first pitch before surrendering a sacrifice fly (Gary Sanchez) that shrunk the Red Sox lead to one run.

When Kimbrel got Gleyber Torres to ground out for game and set, Red Sox Nation didn’t know whether to thank him for the escape or kill him for dangling a few too many lamb chops in front of the Yankee wolves.

He “saved” Games Two and Four of that American League Championship Series by tempting the Astro wolves a little too much—well, since-departed (to the Royals) left fielder Andrew Benintendi really saved Game Four with that electrifying diving catch, on Alex Bregman’s sinking liner that would have crawled to the back of the yard for possibly three runs and an Astro win otherwise. And that was after Kimbrel walked the bases loaded again.

That was then; this is now. For now. Whether it proves too good to last no crystal ball can show with certainty. But for the bearded righthander who still resembles the old TWA terminal at Kennedy when he leans in to take his signs, it’s a season start he hasn’t experienced in too long. The Cubs won’t complain. Yet. It’s tricky and pricey keeping the crash carts on double-secret red alert.