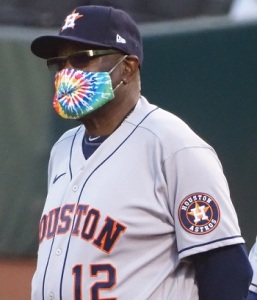 He had nothing to do with Astrogate, but manager Dusty Baker isn’t helping his team move on by calling out fan trolling on whatabout grounds, either.

You wouldn’t expect Dusty Baker to find the catcalls, trash canning, booing, and other trolling of his Astros all that amusing. You get that he’d love nothing more than to have the long stench of Astrogate away from his team. You’d even want to award him a Nobel Grace Under Pressure Prize for taking the job in the Astrogate wake in the first place.

But you sure wouldn’t have wanted Baker to resort to whataboutism when the fan trollings began and continued in earnest. Except that that’s what he’s done, according to the Houston Chronicle‘s Astros beat writer Chandler Rome.

“How many (fans) in the stands have never done anything wrong in their life?” Rome quotes Baker as asking. “We paid the price for it. How many people have not cheated on a test or whatever at some point in time. It’s easy when you live in glass houses, but we don’t live in glass houses . . . When you hear things, what are the kids supposed to think in the stands?”

Admittedly, Baker wasn’t quite as harsh as some social media scribblers who asked how many hadn’t cheated on their spouses or their job applications, or committed robbery or higher crimes including murder. But committing whataboutism about the scandal that destroyed the Astros’ credibility is a very bad look, especially for a man as sensitively intelligent as Baker is.

You really want to play whatabout? Whatabout what the kids were supposed to think when the 2017-18 Astros were exposed as flagrant cheaters who just might have cheated their way to the 2017 World Series championship? That boys will be boys?

Didn’t we all grow up with our parents hammering into us that two wrongs didn’t make a right? Didn’t we drive ourselves batshit cray-cray the last few years over two halves of a country essentially telling each other two wrongs make a new wrong right? And that was before Astrogate.

We carried the message our parents hammered into us . . . until we didn’t, usually when someone we liked did something merely wrong or undeniably criminal.

Picture if you will a corrupt police officer on trial for bribery. The key witnesses against him won’t all be model citizens. Now, picture that cop getting off with acquittal or a hung jury because the jury simply couldn’t take the word of the criminals among the witnesses over the word of a cop. More extreme on the flip side: Just because George Floyd might have resisted arrest did that give an arresting officer the right to kill him?

The Watergate burglars could argue very plausibly that crime on behalf of politics didn’t exactly begin with them. (Unfortunately, it didn’t exactly end with them, either.) Did that make them innocent? (Lots of people said yes on whatabout grounds.) Richard Nixon wasn’t the first (nor the last) sitting president to ponder covering up crime committed on his behalf. Would that have made him less impeachable if he hadn’t resigned in August 1974?

Bill Clinton wasn’t the first president to cheat on his wife in the White House. But he may have been the first to commit three actual crimes trying to cover it up and thus make himself impeachable. Hollering whatabout regarding prior presidents and who knew how many members of both houses of Congress over the years didn’t help him. The Senate that refused to even think about convicting and removing him did.

Senators and Representatives caught en flagrante indicto or confirmed committing crimes usually get thrown out or kinda sorta forced out before they can be thrown out. Just ask J. Parnell Thomas, Wayne Hays, Ray Lederer, Harrison Williams, Bob Packwood, Mario Biaggi, Bob Livingston, Mel Reynolds, Duke Cunningham, and Jim Trafficant, among others. All the whatabout arguments on earth didn’t do them any favours.

Donald Trump was impeached twice. Two immediate predecessors, Barack Obama and George W. Bush, did quite a few things that warranted articles of impeachment, but none were drawn up despite calls for them from those who opposed them. If you wanted to say Trump didn’t cross the line to impeachability, you needed a lot better evidence than the absence of Bush or Obama impeachments.

More than enough tried whatabouting Astrogate. Whatabout the Yankees caught flatfoot (and merely slapped on the wrist) using an Apple Watch to steal signs from their dugout? Whatabout the Red Sox turning their video rooms at home and on the road into sign-stealing apparatus? Whatabout other teams doing or thinking about doing as the Rogue Sox did?

Not only didn’t two or more wrongs make an Astrogate right, the Astros went a lot farther. They not only had a long-since-deposed and disgraced general manager soliciting algorithms to enable high-tech chicanery, they either took a center field camera off its mandatory eight-second transmission delay or installed a fresh camera operating on real time.

Remember: whichever camera it was, it sent real-time opposition signs to clubhouse monitors next to which someone banged the can slowly to signal Astro hitters. The trash can bangings that have inspired as much amusement as outrage—and given fans in Oakland and Anaheim troll fodder so far—were merely the finishing rinse, not the entire shampoo.

The least shocking thing in baseball should have been that fans returning to the ballparks this year, in whatever limited capacity deemed best according to pandemic safety protocols, would want to make up for lost time and do what they couldn’t do with last irregular season’s cutout crowds. (Unless they bought trash can cutouts to plant in the stands, as lots of fans surely did. Or, lined up socially distant but massive enough to troll the Astros’ team bus—as Dodger fans at least did.)

It might have been slightly out of line, but at least the large black-and-gray inflatable imitation trash can falling from the right field bleachers to the warning track in Angel Stadium Monday night was amusing and hardly dangerous. (Jose Altuve certainly seemed to think so, showing a tiny smile from the plate.) It wasn’t funny when a real trash can, large, square, and mostly pink, landed on the track elsewhere during the game. That kind of troll is dangerous. Even the Astros don’t deserve that.

Baker’s in a precarious position, and you feel for the man. Only five members of the Astrogate teams (2017-18) remain with them now. In his heart of hearts, he has to know how patently unfair it is that the many current Astros (including himself) who had nothing to do with the Astro Intelligence Agency should have to suffer the slings, arrows, catcalls, and bangs in and from the stands for the baseball crimes involving the very few remaining.

He also has to understand how outraged were so many fans, and practically four-fifths of the game itself, not just over the depth of Astrogate but the lack of discipline imposed on the players themselves. It cost the Astros a GM and a manager, but the players walked scot-free. Maybe it wouldn’t have been simple to discipline them even if they were willing to spill the deets without immunity, but Commissioner Nero either barely even tried or listened to short-sighted legal counsel.

Starting the season 4-1 didn’t neutralise the trolling. Going whatabout certainly won’t. It was painful to say and is painful to repeat, but the stench and the trolling of Astrogate won’t dissipate until the last Astro standing from the 2017-18 teams no longer wears that uniform. That’s not what Baker wants to hear, of course. The right to boo, hiss, catcall, or bang the can slowly (so long as you don’t let the real cans hit the field) comes with the price of admission.

From sports time immemorial, fans have booed teams for far more ridiculous reasons than proven cheating. From sports time immemorial, too, unfortunately, there have been fan bases who inspire others to think booing is in their DNA. (What’s an old gag about Philadelphia fans? The minister tells the newlywed Philadelphia couple, “I now pronounce you husband and wife,” then tells the husband and the chapel gathering, “You may now boo the bride.”)

The Astros, not the fans, wrote the script that inspires the trolling in the first place. You get why Baker feels that the devil plagues him without warrant. But most of the game and its fans think the Astros still don’t get it. Going whatabout won’t do anything other than exacerbate Astrogate, not eradicate it.