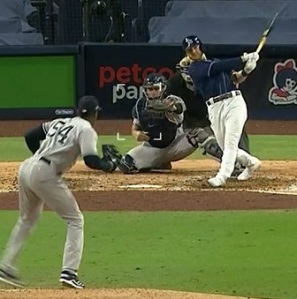 “The world of reality has its limits; the world of imagination is boundless,” wrote the French philosophe Jean-Jacques Rousseau. Baseball is so often like that. His near-namesake Tampa Bay Rays utility man re-proved that Friday night.

You’ve heard of the Year of the Pitcher, right? Until Michael Brosseau squared off against recent near-executioner Aroldis Chapman in the bottom of the eighth, Friday was the Night of the Pitchers.

Neither the Yankees nor the Rays wanted to hear any nonsense about re-juiced postseason baseballs. They made Game Five of their American League division series into an arms race. With only three rude interruptions and Brousseau delivering the one that mattered most.

Brosseau. The guy Chapman nearly beheaded with a 101 mph fastball late in the regular season. The guy facing now facing Chapman after entering the game as a sixth-inning pinch hitter. The guy Thomas Boswell says was “undrafted, bypassed 1,216 times–is a ‘utility man’ who played every position except SS & C this year (including pitcher).”

The guy who wrestled Chapman to a ten-pitch plate appearance, after beginning with an 0-2 count, and hit that tenth pitch over the left field fence. Meaning, ultimately, game, set, and a Rays date with the Houston Astros in the American League Championship Series to come.

“I was just trying to get a runner on and get the next guy up,” Brosseau said after the game. “We knew the hits were coming not very often tonight . . . Obviously, going up there, trying to find a barrel, thankfully it happened.”

Brosseau may not have to buy his own steak in Tampa Bay for a very long time to come.

These Rays and these Yankees threw the kitchen, bathroom, and laundry room sinks at each other from the mound and got through seven and a half innings tied at one, with both runs on home runs and twenty strikeouts between them. And the Rays managed practically to sneak a 2-1 win.

That’s the number 28 payroll in all the Show taking down the number one payroll, if you’re scoring at home. (The Yankees actually hadn’t been the number-one payroll since 2011.) The barely no-name Rays, full of excrutiatingly average major league baseball players, taking down the Empire Emeritus and its usual pack of high-priced, high-profile spreaders.

The Rays, who survived Gerrit Cole’s first short-rest outing in his major league life, who got no-hit by Cole until Austin Meadows found the screws on a 1-1 fastball and sent it over the right field corner fence in the bottom of the fifth.

The Rays, whose first reliever on the night, Nick Andersen, didn’t let Aaron Judge’s fourth-inning leadoff launch to about the same region over the same fence knock him into praying to find the nearest available mouse hole into which to crawl in anguish. He shook it off and worked two full innings’ shutout relief from there. Nothing to it, folks.

The Rays, who withstood everything Zack Britton threw at them, pried one base hit and reached on one abnormal error by Yankee third baseman Gio Urshela but cashed neither of them in, until Brosseau won that showdown with Chapman.

“I knew it felt good,” Brosseau said about the immediate contact with that triple-digit-speed fastball. “I haven’t had much playing time [in Petco Park], so it’s kind of hard to read the dimensions, to see from daytime to nighttime, but it felt good off the bat.”

Just don’t ask him about payback. Everyone else noted poetic justice and karma turning superbitch. Not Brosseau. “No revenge,” he said. “We put that in the past. We came here to try and win a series. We came here to move on, do what we do best, and that’s play our game.”

Re-juiced postseason baseballs took about more than a third of postseason talk with all the home runs interfering in bunches with airline flight patterns until Friday night. The Yankees and the Rays must have drained them before getting started. Three hits all night long, and all three were home runs that almost barely cleared the top of the fences.

On normal rest Cole has a 2.74 earned run average. On five or more days rest, it’s 3.73. On short rest, it could have gone either way Friday night. Especially with the Rays having won the ten straight previous games in which Tyler Glasnow was their starting pitcher, or opener if you prefer. Not to mention the Rays’ key bullpenners entering the game rested slightly better than the key Yankee bulls.

It didn’t start brilliantly for Cole. He walked Brandon Lowe after striking Meadows out impressively, then drilled Randy Arozarena on the first pitch—days after Arozarena took Cole over the fence—which he didn’t likely mean to do, but good luck convincing the Rays, who’ve been waging bad-blood war against the Yankees all year as it is.

The punchout of Meadows made Cole the fastest pitcher to reach a hundred postseason strikeouts, in 79 innings. He nudged the Los Angeles Dodgers’ Clayton Kershaw to one side with it. But he walked the bases loaded around a ground out before catching Joey Wendle looking at strike three for the side.

Cole struck out the side swinging in the second, with fastballs hitting just a hair’s breadth short of 100 mph and a generous helping of late movement, and off-speed breakers maybe two hairs’ breadth short of 90 but diving like paratroopers. And then, he struck out two out of three in a 1-2-3 third.

Why, he even made early mincemeat of a hitter who usually does likewise to him. He got rid of Ji-Man Choi twice on ground outs, after the husky Rays first baseman came into the game hitting .526 off Cole including four home runs.

Himself starting on two days’ rest, Glasnow could have ended up with two on and no outs to open the game if Choi hadn’t made a pair of acrobatic plays to turn a pair of bad throws into tight outs. Glasnow himself threw D.J. LeMahieu’s leadoff grounder back to the box offline, and shortstop Willy Adames did likewise with Judge’s followup hopper, before Aaron Hicks lined out to deep center for the side.

Pete Fairbanks and Diego Castillo finished what Glasnow and Andersen started. Castillo finished in reasonable style, striking Giancarlo Stanton and Luke Voit out before Urshela’s nasty liner up the third base line got snapped by third baseman Wendle as if having to catch a baby shot out of a cannon to save the little one’s dear life.

This wasn’t exactly the way the Yankees wanted to honour the memory of their Hall of Fame pitcher Whitey Ford, who died Thursday night at home while watching the Yankees and the Rays tangle in Game Four. (Both teams honoured a moment of silence in Ford’s memory before the game began.)

It was almost a year since Chapman surrendered Jose Altuve’s ALCS-winning two-run homer. When not burning up social media calling for manager Aaron Boone’s head post-game, Yankee fans wasted little time calling for Chapman’s. Determining whom to rage against more was tough enough.

What wasn’t tough was to remind yourself that to err is human but to forgive is not fan policy. The good news is that, even with social-distancing considerations, no groups of Yankee fans have opened street parties at which they can run over Boone, Chapman, or other shortfalling Yankees’ jerseys. Yet.

The Yankees probably wish Ford and his Hall of Fame battery mate Yogi Berra had brewed a little mad chemistry from their Elysian Fields positions Friday night. The Rays only hope that, whatever mad science of their own got them through the Empire Emeritus will be enough for them to turn the Astros aside in the coming week.

“They’ve been the team to beat the last few years,” said Brosseau of the team the Rays got thatclose to knocking out in another tight full-five division series last year. “They knocked us out last year so it will be fun to face them again.”

Don’t bet against these Rays just yet. If they could get rid of the Yankees and their bomb squad, they won’t exactly let the thought of the Astros’ suddenly revived long distance callers shake their gill slits.