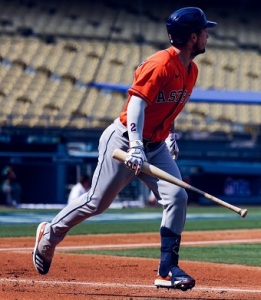 The pandemic-mandated empty house aside, 5 October might as well be Alex Bregman Day . . .

Mr. October Fifth? What’s up with that?

It’s not Alex Bregman’s birthday. (For the record, that’s 30 March.) It’s not his engagement date. (He popped the question to a Colorado lady named Reagan Howard in January.) It’s not his future wedding date. There seems nothing significant elsewhere for him about that date.

Except when he plays postseason baseball. For a fourth consecutive 5 October Bregman found a pitch meaty enough to send long distance. Mark your 2021 calendar accordingly if you must.

He led off the top of the fourth against Oakland starter Chris Bassitt Monday afternoon, starting an American League division series, and sent a 1-2 service into the pandemically-required unoccupied left field bleachers.

It put his Houston Astros on the board after the Athletics helped themselves to a 3-0 lead on long balls themselves. It gave his infield teammate Carlos Correa thoughts about not wanting to be left out of the action after Kyle Tucker followed with a single through the left side of the infield, Correa hitting a 2-0 pitch over the center field fence.

And—with no small assistance from Oakland’s normally vacuum-handed shortstop Marcus Semien’s boot on Josh Reddick’s two-out grounder in the top of the sixth—the Astros seized the chance at new life, not letting something like a subsequent 5-3 deficit spoil the day, and finished with a 10-5 Game One win.

There are far worse talismans to attach to a team than 10-5. Especially to a team who got into this convoluted postseason with a losing record and who spent 2018 and 2019 doing not even once what they did Monday—come back from a pair of multi-run deficits.

And, thanks to the bubble concept putting postseason teams from the division series forward into neutral parks, the Astros’ three postseason wins have now happened in ballparks not their own.

The third, of course, happened in . . . Dodger Stadium. The home of a team with whom they have, ahem, some recent history. The division series home for Games One, Two, and (if necessary) Five of an A’s team that includes the former Astro who blew the whistle on Astrogate at last, last November, after those too well aware of their illegal, off-field-base, altered or extra camera transmitting sign stealing schemes couldn’t convince anyone else to expose it.

“As the game got deeper, the at-bats got better,” said Springer of the Astros’ Monday breakout. “They played the later innings better than we did. We just didn’t have the at-bats we typically do at the end of the game,” said A’s manager Bob Melvin.

How much of a pitcher’s park is Dodger Stadium still, even if it’s not quite the equal of its first two decades? In 91 previous postseason games played there, not once were six home runs hit there. Bregman’s one and Correa’s two were joined by Oakland’s Khris Davis, Sean Murphy, and Matt Olson.

“I’ve never seen the ball carry like that here,” said Astros manager Dusty Baker, who played eight seasons for the Dodgers from the 1970s to the 1980s.

Bregman’s 5 October long-distance mastery has also broken the three-straight-same-date postseason strings of Hall of Famer-to-be Albert Pujols (17 October 2004-05-06) and Francisco Lindor (6 October 2016-17-18). But he’ll have to wait ’till next year for a shot at equaling the five-streaks of Pujols (five straight 30 Mays) and Ryan Braun (five straight 24 Julys) among still-active players.

Then the doings down the freeway in San Diego, in Petco Park, had to go steal the show. The Padres had nothing to do with it. The New York Yankees did. Their winning score against the AL East champion Tampa Bay Rays was a measly 9-3, but oh what a show the Yankees made of it.

Somehow, some way, the Yankees find ways to make history just when you think there isn’t a single piece of history left for that franchise to make. It only began with this: Not since 1956 (when Moose Skowron and Hall of Famer Yogi Berra did it in that World Series) had the Yankees hit two grand slams in a postseason at all—but Monday night they sliced salami for a second straight postseason game. No other American League team has ever done that.

So who the hell needed Gerritt Cole pitching six, striking out eight, and not letting a measly three runs shake him out of his skin before turning things over to Chad Green, Zack Britton, and Luis Cessa? 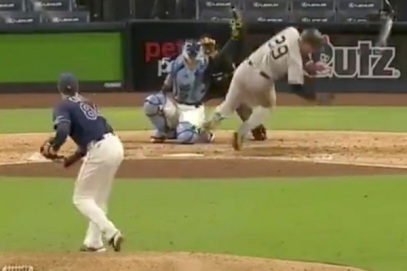 . . . but John Curtiss knocking down Gio Urshela (29) and Gleyber Torres after his salami was sliced was an uncalled-for and terrible look.

Simple: with a 9-3 lead, Yankee skipper Aaron Boone—with the spectre of no division series days off looming—wasn’t going to burn Aroldis Chapman unless the Rays got ornery in the ninth, which they didn’t. And Cessa got rid of the Rays with no interruption but a mere two-out walk.

Monday’s delicatessen slicer was Giancarlo Stanton in the top of the ninth against Rays reliever John Curtiss. It wasn’t as if Stanton was unfamiliar with Petco Park—he won the Home Run Derby there four years ago. Batting now on 2-2, Stanton caught hold of Curtiss’s slider just off the middle of the plate, and drove it just beyond Rays center fielder Kevin Kiermaier’s glove-extended leap and over the center field fence.

Then Curtiss just had to make the Rays look even worse, didn’t he? The next batter was Yankee, third baseman Gio Urshela—whose second-inning defense would have made ancient Yankees Clete Boyer and Graig Nettles plus Hall of Fame Oriole Brooks Robinson proud, with his leaping stab to pick Manuel Margot’s high hopper and throw him out, then his rolling seat-of-the-pants throw to nail Joey Wendle off a hard smash into the hole.

Curtiss sent Urshela sprawling on an up and in 0-1 pitch, with Urshela finally wrestling his way to popping out to the infield. Then Yankee shortstop Gleyber Torres checked in at the plate. Curtiss waited until 2-2 before playing Torres a little chin music. No wonder Torres couldn’t resist stealing second while Brett Gardner batted next.

Oops. Apparently, an awful lot of people called Torres out for the ninth-inning theft. “I don’t like seeing disrespectful things in the game,” crowed Hall of Fame pitcher Pedro Martinez on a TBS postgame show. Forget that the Yankees went 2-8 against the Rays on the irregular season and might be thinking that, no matter the score or the inning, every run counts.

Martinez might be the wrong man to ask, of course, but if you don’t like Torres stealing second with his team up by six in the ninth, did you like Curtiss making the usually likeable Rays—those unknown soldiers, who can normally beat you with the same aplomb as the big boys with the big names and the bigger paychecks—resemble unsportsmanlike sore losers?

Curtiss also made the Yankees look the way the beasts of the Bronx rarely look—sympathetic. And that’s over a month after Chapman nearly decapitated Michael Brousseau with a 101 mph fastball. But that was then, and Chapman’s been a little wild most of his career, anyway. He doesn’t have quite the control required to plan an execution. Not even with the Rays pitching inside tight to a few too many Yankees on the season before that head scratcher.

You’re embarrassed when a guy slices salami on your dollar? You man up, tip your hat, shake it off, and get the next guy out. You don’t knock that next guy and the guy following him down, off, back, or through just because your ego was sent into half orbit, with or without the bases loaded. (It would also help if you don’t surrender a leadoff single, a walk, a one-out RBI single, and a bases-loading walk to set it up, too.)

Things were notoriously tense enough between the Yankees and the Rays on the irregular season. Then, both sides tried to indicate going in that they were going to do their level best to play nice and no rough stuff. Then Curtiss had to deliver a little un-called for rough stuff anyway. No more Mr. Nice Guys?

Don’t be terribly shocked if Monday’s proceedings make Yankee rooters out of even those to whom rooting for the Yankees otherwise flouts family tradition. For this postseason, anyway, depending on whether the Rays behave reasonably from here on out.