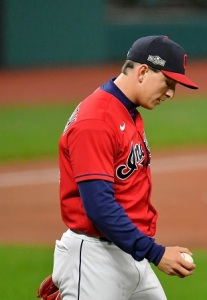 James Karinchak, rocking a Ricky Vaughn haircut, but having been rocked by Gio Urshela Wednesday night.

Bad enough: Cleveland having to host the world babyweight championship bout that was Tuesday night’s allegedly presidential debate. Worse: The Indians won’t get the chance to win their first World Series since the births of Israel, NASCAR, the Polaroid Land camera, and Scrabble.

They won’t even get to play a division series after the New York Yankees swept them out of their wild card series. But to lose an almost five-hour Wednesday night grapple extended by two rain delays totaling 76 minutes and finishing in a 10-9 Yankee win, after both sides threw everything including the kitchen, bathroom, and laundry room sinks?

But it’s close enough to have turned Progressive Field—in the city that also hosts the Rock and Roll Hall of Fame—into Heartbreak Hotel.

The Indians unable to cash in for another tie at minimum in the bottom of the ninth—when Yankee closer Aroldis Chapman’s should-have-been game-ending strikeout turned into a wild pitch, enabling pinch hitter Orlando Mercado to take first on the house, before Chapman regrouped and struck out swinging another pinch hitter, Austin Hedges? It isn’t Edgar Renteria ruining Charles Nagy with a two-out RBI single in the bottom of the eleventh.

The Show’s most reliable irregular season closer and one of the league’s better defenses handing the Yankees a re-tie and go-ahead in the top of the ninth? It isn’t Bryan Shaw surrendering a tie-breaking and a semi-insurance run, and the Indians able to get only one of those runs back, in the tenth inning in Game Seven, 2016 Series.

While you’re at it, it won’t do any good to comfort the Indians by telling them the Yankees once lost a World Series Game Seven by a 10-9 score. Not even if you tell the Tribe the Yankees lost it when Hall of Famer Yogi Berra playing left field could only watch helplessly when Hall of Famer Bill Mazeroski’s leadoff drive sailed over the left field wall in ancient Forbes Field.

Cleveland’s going to have a tough enough time trying to figure out which part hurt the most Wednesday night. They’ll have plenty of candidates. They’ll need plenty of salve.

“We had many different things and a lot of obstacles, but this group stayed together — by any means,” said Sandy Alomar, the Indians’ interim manager thanks to Terry Francona’s continuing health issues, who might yet get Manager of the Year votes just for getting the Indians to the postseason at all. “We had an eight-game losing streak, they came back. Today’s game reflected how much this team grinds and how much they fight.”

The candidates for the biggest hurt of the Indians’ now-finished season may only begin with Alomar deciding he needed a strikeout machine to handle Yankee third baseman Gio Urshela in the top of the fourth, with the bases loaded, nobody out, and the Tribe with a 4-1 lead they built with a pair of RBI doubles and an RBI single in the bottom of the first.

Alomar brought in James Karinchak to relieve starter Carlos Carrasco, cheated a bit by the rain delays The first pitch of the game was delayed by rain that hadn’t yet arrived. The second hit in the bottom of the first, and that time the rain lasted slightly over half an hour.

Until he entered Wednesday night, Karinchak’s young career showed 131 batters facing him and only one ever hitting anything out. It also shows him rocking the jagged-back haircut Charlie Sheen made famous as fictional flame-throwing Indians pitcher Ricky Vaughn in Major League. Now, Urshela and Karinchak wrestled to a full count.

The Wild Thing he wasn’t, but poor Karinchak’s young career now shows one postseason appearance and one disaster. With one swing and one launch into the left field bleachers, former Indian Urshela burned his old team four ways to eternity.

He also made Yankee history while he was at it. Thirteen Yankees have hit postseason grand slams, and Urshela is the first Yankee third baseman to slice such salami and the only Yankee anywhere to do it when the Yankees were behind.

Maybe it’ll comfort Indians fans to know that the Buffalonto Blue Jays got shoved out of the postseason earlier and likewise Wednesday. When the Jays’ best pitcher, former Dodger Hyun-Jin Ryu, faced Hunter Renfroe, a Ray who’d been 2-for-18 with seven strikeouts lifetime against him, in the second inning . . . and Renfroe sliced what amounted to season-ending salami for the Jays.

All night long, the Indians had answers for the Yankees. Let Giancarlo Stanton put the Yankees up 6-4 with a sacrifice fly in the top of the fifth, three innings after Stanton accounted for the first Yankee run with a home run? Why, they’ll just let Jose Ramirez whack a two-run double down the right field line to re-tie in the bottom of the fifth.

Let Gary Sanchez—the embattled Yankee catcher benched for Game One after he made Mario Mendoza resemble Mickey Mantle on the irregular season, and batted ninth for Game Two—smack a two-run homer in the top of the sixth to break the six-all tie? Why, the Indians will just send Jason Luplow to the plate, pinch hitting for Josh Naylor—their return from San Diego, after unloading pitcher Mike Clevinger a fortnight after he violated  COVID protocol violations.

That was some cojones on Alomar pinch hitting for Naylor, who’d set a Show precedent with five hits in his first five postseason plate appearances. Good thing the Indians let Luplow smack a two-run double to the back of center field to re-tie the game at eight.

For good measure, they’ll even let Cesar Hernandez fight Chapman off to dump a floater of an RBI single into short center field to make it 9-8, Indians. Then, they’ll shake off Urshela’s likely game-saving double play start to end that eighth and bring in Brad Hand, who led the Show with sixteen saves and didn’t blow a single save opportunity all irregular season long while he was at it.

Hand picked the wrong night to open a save opportunity by walking Stanton. Urshela then singled Stanton’s pinch runner Mike Tauchman to second. Gleyber Torres beat out an infield dribbler to load the pillows, and Brett Gardner struck out, but Sanchez lofted a re-tying sacrifice fly to center field.

Up stepped American League batting champion D.J. LeMahieu. He called slider in the center pocket and cued it right up the middle and right through the Indians’ middle infield. And, alas, right under center fielder Delino DeShields’s down-stretched glove, enabling Urshela to score the tenth Yankee run.

The Indians ran out of answers in the bottom of the ninth.

One night after they punished American League Cy Young Award favourite Shane Bieber, the Yankees had to survive the elements and Indians tenacity to get themselves a division series date with the Rays, who beat them out of the American League East title and who lack both the Yankees’ star power and the meaning of the word “quit.”

“You don’t have to pour champagne on each other,” said Yankee manager Aaron Boone, whose winners stuck to the COVID protocols and exchanged mere fist bumps to celebrate, “to appreciate what an epic game that was and the fact that we’re moving on.”

Forgive Cleveland if the epic side of the game escapes for a good while. Embrace these Indians who fought the good fight against a Yankee team they never saw on the irregular season but had to get past excess familiarity with the medical profession for a second straight season.

So far as these Yankees are concerned, they survived the best the Indians could throw at them to make it four times in the past four seasons they’ve sent either the Indians or the Minnesota Twins home for the winter early. But the Indians and their fans—already rubbing their eyes over Francisco Lindor, Franmil Reyes, and Carlos Santana going 1-for-23 at the plate this set—are going to wonder how their number one strength, their pitching, became their number-one vulnerability.

Don’t remind Cleveland that the same thing happened in the 1954 World Series, when another stellar Indians pitching staff—including Hall of Famers Bob Lemon and Early Wynn, Mike (The Big Bear) Garcia, and what still remained of Hall of Famer Bob Feller—led an 111-game winning team into a Series sweep by the New York Giants. It won’t make this one sting any more gently.

“That game is literally the definition of a rollercoaster ride right there,” said Indians relief pitcher Nick Wittgren after it ended Wednesday night. “It was amazing to see our guys fight back . . . We were fighting, battling the entire game. That was fun to watch. It would have been a little more fun to be playing tomorrow.”