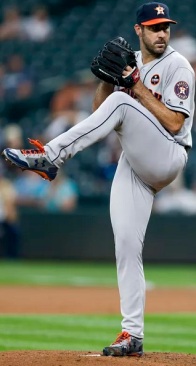 Verlander faces Tommy John surgery. Will it begin the Astros’ reconfiguration, too?

One of the jokes going around the last couple of months is a visual of one of those make-yourself/change-yourself outdoor display signs, reading, “Going to ask Mom if that offer to slap me into next year is still good.” This year’s Houston Astros have more reason than most major league baseball teams to ask Mom for that slap.

Before the coronavirus world tour interrupted spring training, invited the hurry-up summer camps, and delivered the truncated regular season with all its foibles, follies, and folderol, the Astros figured only to wear a scarlet C. All things considered, they might settle for that right now. It might be an improvement.

They were injury-punctured almost from the words “Play ball!” when the truncated season began. If the New York Yankees’ 2020 yearbook could be The Johns Hopkins Medical Journal, the Astros’ could be The Physicians Desk Reference. The latest casualty: Justin Verlander, who’s graduating from the injured list after a single late July start to down until 2022 after he undergoes Tommy John surgery.

We should probably consider as ESPN’s David Schoenfield does, that Verlander’s right elbow ligaments were lucky to have lasted as long as they did. He’s thrown 51,931 pitches in sixteen major league seasons—48,822 in regular season play and 3,109 in postseason play. That averages out to 107 pitches per regular season start and 100 per postseason game, in a career in which he’s averaged seven innings a start.

Verlander’s Astro deal expires after next season. He’ll be 39 when he hits the open market then. Pitchers that age not named Jamie Moyer have tricky enough markets without being 39-year-old post-Tommy John pitchers. Taking every objective factor into consideration, we may have seen the last of Verlander in a major league uniform and now count the days to the beginning of his Hall of Fame watch.

We may also be watching the beginning of the end of the Astros’ tainted legacy while we’re at it.

Verlander himself isn’t part of the taint. It wasn’t the Astros’ pitchers who cooked up that illegal, off-field-based, electronic sign-stealing Astro Intelligence Agency operation that rendered their 2017 World Series title stained forever. But the opportunity is about to arrive for which the Astros’ new regime can apply and spread the Febreeze liberally.

Nine of this year’s team remain from the tainted 2017-18 team. Three—first baseman Yuli Gurriel, and outfielders Josh Reddick and George Springer—can hit the open market this winter. Three—shortstop Carlos Correa, and pitchers Chris Devenski and Lance McCullers, Jr.—are signed through the end of this season and become arbitration-eligible after next year. Two—second baseman Jose Altuve and third baseman Alex Bregman—are locked in through the end of 2024.

Schoenfield thinks that of the foregoing free agency-to-be group Springer might be the one the Astros would love most to keep. But he also thinks Springer might still hold a grudge against the organisation for their bid to try signing him long-term while he was still in the minors and for their delay in promoting him to the Show.

Astroworld may be watching the last days of Springer in Astros fatigues. From this point until the end of 2021, it’s also possible that the Astros will be remade and remodeled. Maybe a tear-down on behalf of a renewed youth movement, hopefully without compromising the team’s competitiveness, but definitely continuing the cleanup of the Jeff Luhnow fallout.

The sooner, the better. New general manager James Click’s challenge is keeping the best of that era aboard and making sure the worst doesn’t get to within ten nautical miles of the franchise ever again.

The Luhnow administration’s forward-ho analytical approaches forced other teams to re-think and re-model their own player development. That was good for the game as well as for the Astros, and the braying old farts who screamed bloody murder over the thinking person’s sport being invaded by, you know, actual thinking, were invited kindly but firmly to sit down and shut up.

But the braying old farts had one point after all, even in the breach. The price for the Astros was a win-at-all-cost mindset through which Luhnow’s leadership left the Astros as misogynistic cheaters who just might sacrifice virgins while running an extracurricular spy ring, if it meant winning that one extra game to make the difference.

Not one Astro player truly paid the price—unless you count ducking pitches to their heads or elsewhere this year, that is. (On the flip side, alas, is poor Abraham Toro. He wasn’t an Astro until last August. But he leads with having taken six for the team. Not nice, not acceptable. At least Los Angeles Dodgers pitcher Joe Kelly targeted two who were 2017-18 Astros.)

The players were offered and took immunity in return for spilling their Astrogate beans. They didn’t pay so much as a quarter’s worth of a fine, and when called upon to stand accountable in the public eye they apologised, kind of, sort of, before spring training was stopped due to the pandemic.

Harrumph if you must about the 2018 Boston Red Sox, likewise exposed as high-tech cheaters. But there were reasons they didn’t feel half the cheat-shaming the Astros have taken. For starters, they executed manager Alex Cora—thought to have been an Astrogate mastermind—before the investigation into their own Soxgate treachery was finished.

Also, the Rogue Sox Replay Room Reconnaissance Ring depended entirely upon what was handed them in their video rooms (at home and on the road) and upon someone sending stolen signs to their baserunners to send to the batter’s box. MLB handed the Rogue Sox the keys to the liquor cabinet and dared them not to open it and drink underage. It won’t be that shocking if we discover they weren’t the only ones drinking accordingly.

But nobody on high told or allowed the Astro Intelligence Agency to either alter an existing camera off the mandatory eight-second transmission delay or install a fresh, furtive, real-time camera, sending signs to the clubhouse monitor next to which someone banged the can slowly sending the stolen intelligence to the hitters.

By the way, the Red Sox are so far out of the postseason picture this year you could argue a case of instant karma. You could, that is, if you ignore that last offseason they were, inexplicably, more concerned about staying under the game’s luxury tax than about locking down their franchise player—who’s now locked in as a Dodger for life and helping them to what’s liable to hold up as coronaball’s best record.

Luhnow’s ramifications went beyond just soiling the Astros’ powerhouse and the team’s image.

We know now that the entire sport prayed that the net result of last year’s postseason would be anyone but the Astros winning the World Series. We know now that too much of the Show believed the major reason the Astros abandoned the AIA by 2019 was their possible fear of exposure.

We also know that the Washington Nationals—who sent their postseason pitchers to the mound prepared to change up as many as five sets of signs each, just in case—spoke of it being “amazing, once we were playing the Astros [in the World Series], how many people were coming out of the woodwork to let us know what they were doing.”

In other words, the Nats winning the Series at all gave the sport the warmest fuzzy possible. Winning it entirely on the road, in Minute Maid Park, was almost gravy.

(Last year, the Nats turned a 19-31 record into the Promised Land. This morning, the 19-31 Nats battered and bruised themselves out of a postseason trip. Wait till next year.)

Luhnow even had an impact on the sale of another major league franchise. Alex Rodriguez and his partner Jennifer Lopez lost out on buying the New York Mets as much because of A-Rod’s informal contacts with the suspended Luhnow as because J-Rod didn’t have quite the billions to tap that hedge fund wheel Steve Cohen does.

The last thing the Mets and the Show alike needed was seeing the Mets sold to someone who’d take counsel from the man who made it possible for a World Series champion and three-times-dominant American League West champion to resemble an unholy union between a high-tech frat house and an underground spy network.

The next-to-last thing the sport needed was to see an Astro fan base whose profound loyalty was second to very few ground under the Astrogate heel. Those Astro fans who refused to be shaken tripped over their own circle-squarings; those Astro fans who couldn’t help but be shaken still try making sense of it.

If the Astros are indeed on the threshold of a tear-down and remodel, it’s the best thing that could happen to the franchise and their fans, and one of the best for the sport itself.