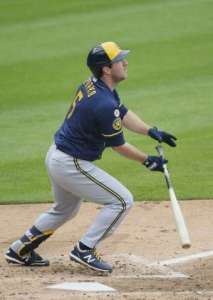 The Miami Marlins aren’t the only one of Wednesday’s teams deserving of your sympathy. How would you like to be the guys who raided the other guys’ house, left nothing behind including hostages dead or alive, and the rest of the world says big deal! thanks to the holocaust in Atlanta?

OK, so the Milwaukee Brewers didn’t start their destruction of the Detroit Tigers with an early-and-often eleven-run break-in. They more or less slipped in barely noticed and performed a rather methodical room-by-room, occupant-by-occupant roust, joust, and ravage.

So give the Brewers their due. They came. They saw. They took neither prisoners nor hostages.

Once upon a time, the J. Geils Band wrote, sang, and played a party song called “Detroit Breakdown.” It showed up on a live album called Blow Your Face Out. On Wednesday night, the Brewers plundered the Tigers’ house and blew their faces out, 19-0. Setting a franchise record with their thirteen extra-base hits, eight doubles and five home runs.

The least insulting part for the Tigers had to be Brewers starter Corbin Burnes striking out eleven and allowing one hit in seven innings while his partners in crime picked off the Comerica Park hosts and their silver, jewelry, fine crystal, and negotiable securities.

If the Braves dropped the equivalent of the St. Valentine’s Day Massacre on the Marlins, the Brewers had to settle for being the gendarmes who sent the Appalachin Conference wiseguys scattering to the woods and anyplace else they could escape. Rest assured, the Brewers won’t object.

“Not much good happened for us,” lamented Tigers manager Ron Gardenhire, “other than no one got hurt.” That’s a matter of opinion, of course. “When you’re scoring runs like that,” Burnes told the Milwaukee Journal-Sentinel, “it makes it real easy on the pitcher. You just go out and pound the zone and play loose.”

Pound the zone? The Brewers hitters assaulted and battered it. Play loose? The way they were going, the Brewers could have loosened the fasteners on their arms and legs and still picked the Tigers’ house cleaner than the proverbial hound’s tooth.

They bit Tigers starter Matthew Boyd first, for seven runs and eight hits in three official innings before he was reprieved in the fourth without getting a single out from the three hitters he faced to open that inning. And one of the seven was surrendered by his successor.

He dodged the furies after giving up two walks in the first, but Orlando Arcia and Luis Urias doubled back-to-back to open the second, Arcia’s a ground-ruler. The good news: Urias got cuffed and stuffed trying to steal third. The bad news: Tyrone Taylor promptly doubled, Jacob Nottingham walked on four pitches, and Avisail Garcia promptly hit a hanging slider for a two-run double.

Two ground outs later Boyd escaped. The escape lasted just long enough for Jedd Gyorko (pronounced “jerko,” which is just what he would do to a full-count fastball) to open the third sending one over the right field fence. And even that was only the fourth Brewers run, since Boyd turned Ryan Braun’s base hit up the pipe into Arcia dialing into a step-and-throw double play at second base and Urias grounding out to third.

Still, a 4-0 deficit is manageable, right? Wrong. After Taylor opened the fourth beating out an infield hit, the Sheriff of Nottingham hit a hanging changeup over the left field fence and Garcia walked on 3-1. Gardenhire must have decided he wasn’t about to let any of his pitchers suffer excess abuse and lifted Boyd for John Schreiber.

Oops. Schreiber started his evening’s work by plunking Keston Hiura. Then, he got rid of slumping Brewers superman Christian Yelich on a fly to left and caught Gyorko looking at strike three without a single pitch leaving the strike zone or kissing Gyorko’s bat. So far, so good, right? Wrong. Braun hung the seventh run on Boyd’s jacket when Schreiber served him an unsinkable sinker to sink into left field to send Garcia home, before Schreiber struck Arcia out, again on three pitches.

Better: Schreiber zipped through the Brewers in order in the fifth. Worse: He opened the sixth feeding Garcia something to bounce over the wall for a ground rule double and, after Hiura flied out to right, Yelich remembered who he was supposed to be, after all, and doubled far down the right field line to cash Garcia in with the eighth Brewers run.

Now, Gardenhire ended Schreiber’s misery and brought in Rony Garcia. Gyorko popped out to shortstop but Braun worked out a walk, Arcia loaded the pillows with a base hit, and Urias on 2-2 hit a three-run double to left, followed almost immediately by Taylor on 2-1 doubling Urias home to just about the same real estate plot. Then Garcia busted the Sheriff of Nottingham with a punchout for the side.

Gardenhire’s next attempt to put the cuffs on the Brewers would be Kyle Funkhauser to open the seventh. Motown legend James Jamerson never cleaned his Fender bass because he swore the dirt made the funk. The Brewers decided the dirt would unmake the Funkhauser. It only began when Garcia wrestled his way to a full-count leadoff walk and, while working to pinch hitter Eric Sogard, Funkhauser wild-pitched Garcia to second.

Sogard singled him to third to climax another wrestle of a plate appearance, Yelich walked, and Gyorko dialing Area Code 6-4-3 didn’t exactly give the Tigers a recess from the burglary since Garcia came home on the play while Sogard claimed third. Braun announced recess over when he sent a first-pitch meatball over the left field fence.

Fifteen unanswered Brewers runs. These Tigers were being de-toothed, de-fanged, and de-clawed with not even a cursory roar in response.

“It’s been a long time coming,” Braun said post-game about the Brewers’ Wednesday night battery. “Obviously, things haven’t gone very well for us offensively [this season], so whenever you do have a rare, good day like that, you have to really enjoy it.”

Is it me, or are Gardenhire and other Show managers forgetting that this season’s three-batter minimum for relief pitchers doesn’t obligate them to leave the poor saps in past three batters on obviously modest nights? Funkhauser from there survived Arcia’s single to lure Urias into forcing him out at second for the side, but still . . .

Joe Jimenez opened the Milwaukee eighth hitting Taylor with a pitch before getting three prompt enough outs, and that was practically the cleanest Detroit pitching turn of the night. Then Travis Demeritte—a right fielder by profession—opened the ninth by getting Yelich to ground out. You knew it would be too good to last by now.

You were right. Gyorko promptly dropped his second bomb of the night, this time over the left field fence. Braun popped out to follow, but Arcia poked a base hit to very shallow left and helped himself to second on a throwing error by Tigers shortstop Willi Castro. Urias sent him home with a single up the pipe, and Taylor drove a 1-0 dead fish a little farther than Gyorko’s one-out drive landed.

Demeritte merely spent his professional pitching debut getting bounced off the walls. Nottingham flying out to left for the side was a show of Brewers mercy.

Josh Lindblom, usually a Brewers starter, retired the Tigers in order in the bottom of the ninth to end the raid. It would have been easier to mine plutonium with a swizzle stick than for the Tigers—who’d had eleven comebacks on the truncated season to date—to mount a nineteen-run comeback in the ninth as it was.

Schreiber and Funkhauser were optioned to the Tigers’ alternate site after the game. For the first time all night long, they must have felt as though somebody wanted to do something other than use, misuse, and abuse them.

This was the single worst shutout loss in Tiger history. The previous subterranean low was a 16-0 massacre at the hands of the St. Louis Browns in 1922, almost a century ago, and that was with Hall of Famer Ty Cobb in the lineup and going hitless in three trips to the plate. That day, they had five hits, three more than they could summon up Wednesday night.

“I think we all had a bad day,” Gardenhire said. “You guys had to have a bad day, you had to watch that, too. So, you know what? That wasn’t fun. We tried to survive.” After such a home invasion as Wednesday night, the Tigers might want to think about upgrading their alarm systems.