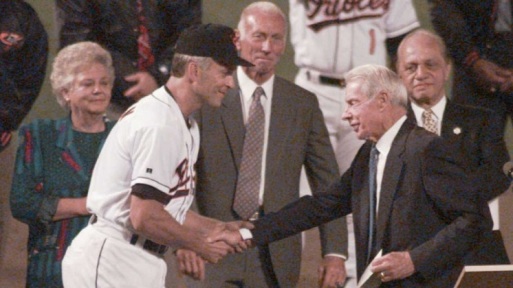 With his parents Vi and Cal, Sr. behind them, Cal Ripken, Jr. accepts congratulations from Joe DiMaggio, whose teammate’s streak Ripken had just broken 25 years ago.

“A man, a gentleman, and a great ball player whose amazing record of 2,130 consecutive games should stand for all time,” the monument still reads, beneath a bronze impression of Gehrig’s face beneath his Yankee cap. DiMaggio finished quoting the sentence, then tilted his head a bit to his right.

The Clipper arched his right eyebrow, as if in slightly bemused disbelief. He pursed his lips into a half-mischievious, half-astonished look on the face age softened into a kind of regal handsomeness. As the crowd began to cheer again, he continued.

“Well, that goes to prove even the greatest records are made to be broken,” said the man whose own record 56-game hitting streak was once thought more likely to fall before Gehrig’s consecutive game streak. “And . . . wherever my former teammate Lou Gehrig is today, I’m sure he’s tipping his cap to you, Cal Ripken.”

Ripken’s father, Cal, Sr., an Oriole legend in his own right as a longtime minor league manager and teacher, stood behind DiMaggio beaming as DiMaggio turned to the son who’d just “reached the unreachable star,” as ESPN broadcaster Chris Berman said the moment 2,131 became an official game.

Ripken himself smiled in both relief and a little bit of awe as DiMaggio continued, “He’s a one in a million ballplayer, who came along to break [Gehrig’s] record, and my congratulations to you, Cal, you certainly deserve this lasting tribute.”

DiMaggio was 6’2″ in his playing days. Ripken was 6’4″ as he remains today, so far. Thanks to age, DiMaggio now stood a full head shorter as he shook hands with Ripken’s parents. He hadn’t just come forth to give a formal scripted tribute. The Clipper had watched the entire game (so had fellow Hall of Famers Frank and Brooks Robinson, the latter in the Orioles broadcast booth), including Ripken’s hefty drive halfway up the left field seats in the bottom of the fourth.

In game terms the Orioles’ 4-2 win meant almost nothing in their American League East standings, headed as they were for a third-place finish fifteen games behind the eventual East champion Boston Red Sox. The California Angels, in first place in the AL West that night, ended up finishing a game behind the champion Seattle Mariners after they couldn’t force a playoff game against Hall of Famer Randy Johnson.

But in baseball terms, of course, Ripken’s achievement meant more than the outcome of any pennant race or World Series. In the aftermath of a players’ strike that disillusioned the country, abetted no end by a sporting press two thirds of which at least bought into the owners’ insistence that the players stop them before they overspent yet again, Ripken told his country and the world it was more than okay to love the game all over again.

“My favorite piece of memorabilia of my years playing is the lithograph of him hitting that home run off me that he had signed for me the next year,” says Shawn Boskie, the Angels pitcher who surrendered that fourth-inning bomb, as part of The Athletic‘s remarkable oral history of the record night. “The biggest thing that can be said is that the electricity and the anticipation for that game, building up to that moment, is something that I would expect I’ll never see again.”

Ripken wasn’t always understood so well until he finally did pass Gehrig. For months he’d had to put up with notions from intelligentsia and fans alike that he was putting himself ahead of his team. The consummate team player, who’d been raised to believe that being an everyday player meant just that so long as you could play, must have bristled under that unwarranted lash.

He turned 35 shortly before he consummated the streak. He wasn’t having a classic Ripken year in a season shortened to 144 games by the hangover of the strike. To this day, he doesn’t buy the selfishness argument.

“I always thought my job was (as) a player. My job was to come to the ballpark ready to play, and the streak was not created because I dictated I was going to play,” he said for The Athletic‘s oral history.

It was created because I brought value to each and every day. The manager chose me . . . It was more about being there for the team and you could even make the case that it was a little bit more unselfish than selfish. But I endured the criticism. People enjoyed taking that position when it happened. And I always thought your best protection against that was to get out of your slump. As soon as you got out of your slump, all of that stuff went away.

Ken Rosenthal, today an Athletic writer and Fox Sports broadcaster but then covering the Orioles for the Baltimore Sun, understands well. “Whether it was a worthwhile endeavor or not, whether he could have had an even better career,” he said for the oral history, “we can debate that until we’re blue in the face.”

His point always was, ‘Hey, if my manager feels that I’m the best guy to be out there, well, that’s it.’ It wasn’t always that simple, of course, because managers felt afraid, I think, to (not start him). But I remember (former Orioles manager) Johnny Oates always saying, ‘Hey man, two outs in the ninth, that’s where I want the ball hit.’ And even when he wasn’t hitting, that was always the case. It was just a remarkable accomplishment. … It was a testament to his toughness, his mental strength, all of the physical attributes, everything. Just to do it was unreal.

Ripken would finish his career with 431 home runs, hitting 353 of them as a regular shortstop—ahead of Alex Rodriguez (345 as a regular shortstop) and fellow Hall of Famer Ernie Banks (298 as a regular shortstop). Remember: he was the prototype of the big man who could play a field position formerly governed by not-so-big men with spaghetti bats. Eight men have finished careers with 3,000+ hits and 400+ home runs; Ripken’s the only mostly middle infielder in the pack.

Baseball Reference defines fielding runs as the number of runs saved above the league average based on how many plays you make. Ripken’s 181 lifetime are behind only two shortstops, ever: his Oriole predecessor Mark Belanger* (238) and his fellow Hall of Famer Ozzie Smith (239). Belanger’s Oriole predecessor, Hall of Famer Luis Aparicio (who did most of his best work for the White Sox previously), is 27 behind Ripken.

For those willing to set aside Alex Rodriguez’s baggage, know that A-Rod isn’t even among the top 24 shortstops for fielding runs. He’s barely among the top one hundred. (His career total: +18.) We now know that those Seattle seasons during which he was hyped as possibly the greatest all-around shortstop of all time in the making was just that, hype.

Without the complete defensive numbers for Hall of Famer Honus Wagner (fielding runs weren’t even considered in his time, and Wagner’s only eleventh all-time in range factor, 23rd in career assists, and 79th in double plays turned, if that helps), we may or may not be able to say Ripken is the greatest all-around shortstop who ever played the game in any era. But it’s very safe to say he’s the absolute best all-around shortstop of the post-World War II/post-integration/night-ball era. No questions asked.

Would Ripken have done even better, after his throwing arm finally began resigning after all those years and games, had he been moved to second base instead of third for his final five and a half seasons? Would he have been healthy enough to hit 500+ if he had taken time off when injured? We’ll never know. We don’t have to know, either.

He earned the right to be measured by far more than just what proved to be 2,632 consecutive games played before he finally took himself out of the lineup. He shakes out on the evidence as the number three shortstop ever to play the game. (A-Rod and the Flying Dutchman are ahead of him only because of their bats; Ripken has more defensive wins above replacement-level than a) the pair of them and b) any shortstop other than Belanger and Smith.) He didn’t get there only by showing up to work every day.

Twenty-five years later, Ripken doesn’t have to apologise to anyone or justify himself for hanging in tough and proud enough to break Lou Gehrig’s streak. He did it in honest competition; he came out of far fewer games than Gehrig actually did. It wasn’t Gehrig’s fault that an insidious disease ended his streak and career at once; it wasn’t a black mark against Ripken that his health allowed the Iron Bird to pass the Iron Horse.

Joe DiMaggio was right—Gehrig probably did tip his cap from the Elysian Fields to Ripken that night. Today, from those same Elysian Fields, Gehrig and DiMaggio will both tip their caps. So will every Oriole in uniform at Camden Yards this afternoon—when the Orioles play the Yankees.

The only shame in either the streak itself or its silver anniversary is that the coronavirus world tour continues keeps fans out of the ballparks. The idea of canned noise of a standing ovation celebrating Ripken this afternoon somehow seems as fraudulent as Ripken’s achievement wasn’t.

* So why isn’t Mark Belanger—clearly Ozzie Smith’s near-equal as a defensive shortstop—in the Hall of Fame, despite the Hall more recently taking defense, preventing runs, far more seriously than it had during his era?

1) He couldn’t hit even compared to Ozzie Smith, who laboured to improve as a hitter as his career went on.

2) His career ended before the advent of the ESPN/SportsCenter/cable era that so boosted Smith as Smith’s career really began taking off, leaving Belanger’s own acrobatic defense away from reaching the audiences outside Baltimore that it should have reached. He won eight Gold Gloves at shortstop but never made an All-Star team, so he never got even that chance before national television audiences.

3) He only appeared in two World Series almost a decade apart, the second toward the end of his career. He didn’t really have the chances Brooks Robinson, his Hall of Fame partner at third base, had to show the country beyond Baltimore [in the 1966, 1969, and 1970 World Series] what he was made of in the field in the pre-cable era.