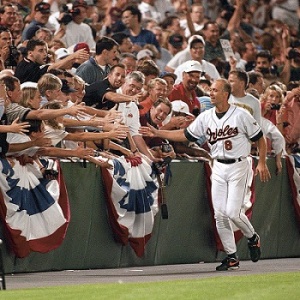 Just how old are we getting? One Sunday, Tom Seaver, the arguable greatest pitcher of his generation, loses a cruel battle against Lewy body dementia with a little help from the coronavirus. The following Sunday, tomorrow, baseball in general and Baltimore in particular celebrate the silver anniversary of the record everyone thought couldn’t be broken.

If you don’t count his sort-of cup-of-coffee 1981, Cal Ripken, Jr. and Seaver played the same number of major league seasons. (Twenty.) Ripken’s place in baseball lore would have been secured even without besting Lou Gehrig’s consecutive games played by 502, thanks to being the guy who proved tall, powerful men could play an infield position once thought the domain of bantamweights while hitting ike heavyweights.

Do you remember consecutive game 2,131 in Camden Yards? Baltimore won’t forget, but a lot of people with no skin in the Orioles’ game might need a refresher.

Ripken played consecutive game 2,129 and hit one out. He equaled Gehrig the next night . . . and hit one out. On the night he passed the Iron Horse, the Iron Bird turned on a 3-0 pitch from California Angels righthander Shawn Boskie in the bottom of the fourth—and sent it halfway up the left field seats.

“I gave him a great gift,” said Boskie after the game, with no malice aforethought. “I gave him the best gift he could get. It was three balls and no strikes. I felt like I had no outs. I didn’t want to walk a guy and get things started that way. At the same time, I felt like he might be swinging, but I felt like, Hey, I’ve got to take a chance of him popping it up or hitting a grounder. But he didn’t, so . . . Cal Ripken Day.”

The Orioles beat the Angels in that money game, 4-2. The sellout audience of 46,272 went at least as nuts at that blast as they’d go when the game became official at around 9:20 p.m. Eastern time. When Chris Berman, calling the game for ESPN, declared, “Cal Ripken, Jr. has reached the unreachable star.”

It took them over 22 minutes to calm down to mere cheering and applause after that point. The Camden audience included two Hall of Famers, one of whom was Ripken’s manager for a spell (Frank Robinson) and the other of whom just so happened to have had Gehrig himself as a living, breathing teammate. (DiMaggio.)

They celebrated the elite middle infielder who’d retire as the only one among the game’s eight greatest shortstops ever to nail three thousand hits or more and four hundred home runs or more. (Alex Rodriguez, love him or loathe him, moved to third base when he joined the Yankees and fell short of the milestones as a shortstop.)

The elite shortstop who never acted like anything more than the ordinary working stiff, from the dock or the line or the shop or the store to the boardroom and the penthouse and the Lear jet, showing up to work every day, few if any questions asked, never thinking of delivering less than the best of whatever he had.

Unknown, uncountable millions of such working stiffs showed up to work every day for eons before Ripken and continue doing so. How many of them don’t just show up but excel and even transcend their jobs?

“People who don’t know baseball as big leaguers experience it,” wrote George F. Will, “say: How lucky for Ripken that he was never hurt. Actually, he has been hurt every year, but not hurt enough to justify, in his mind, taking a day off. What defines Ripken is his defintion of ‘enough’.”

How many of them did it regardless of such interruptions as the 1994-95 strike for which the players took an unwarranted public relations beating thanks to a two-thirds-cowed press buying all the way into the owners’ insistence that the players stop them before they overspent, mis-spent, or mal-spent yet again?

No single player decided his brethren should spend the final third of 1994 and a sliver of 1995 on the picket instead of the field. Fools who think Ripken’s streak should be asterisked because of the strike ought to be asterisked themselves.

When White Sox owner Jerry Reinsdorf—the owner who pushed the hardest to force the strike—celebrated its end by insisting he wouldn’t leave Albert Belle’s domain until Belle kindly signed a three-year contract paying him three million a year more than the previous highest single-season player salary, he exposed himself and every other owner who pushed hardest to force that strike as hypocrites. 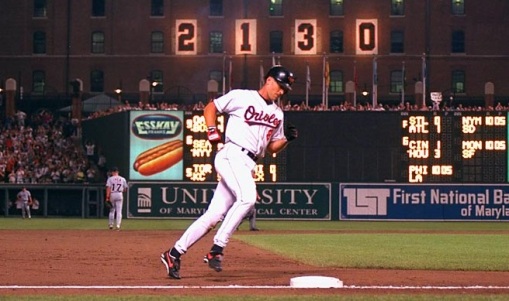 Ripken running out the home run he hit an inning before 2,131 became official.

The Camden crowd almost couldn’t have cared less about such not-so-fine details on the Big Night. But they celebrated an awful lot more than just their own baseball icon passing the record of a past baseball icon.

Shirley Povich, the arguable dean of deans among Washington baseball writers for what seemed a couple of centuries, a man who covered Walter Johnson saving the Washington Senators’ only World Series triumph and the Iron Bird leaving the Iron Horse behind, nailed it best:

By acclamation, Ripken has won approval as a hero and role model. In Gehrig’s day there were heroes, like himself and Babe Ruth, but folks didn’t talk of role models and, anyway, they would have been hard to find. So many, like Ruth, were flawed, so many like Gehrig were nice guys but absorbed mostly in baseball with little time for the community.

For all his fame, Cal Ripken is homespun. On the morning of the day he would go for the record he said it was important, too, that he take his daughter Rachel, 5, to her first day in school. When the cheers in Camden Yards were at their loudest—”We want Cal!”—he asked for his mom and dad to come onto the field to share them. When he got those eight curtain calls and he took that victory lap around the park, he tried to shake every hand offered him. He was being more than cheered. This was adoration.

Indeed, as Thomas Boswell recorded, Ripken wore a unique T-shirt beneath his Oriole uniform on the record night. It said on the back, “2130-plus. Hugs and Kisses for Daddy.” The audience saw it when Ripken removed and handed his jersey and hat to his first wife and their two small children after the game became official and the thunder began. Rachel Ripken, whom Daddy drove to school that morning, couldn’t resist crowing, “See, Daddy’s wearing my shirt!”

It happened after Ripken lined out to end the bottom of the fifth, after the game became official in the books. He donned a fresh jersey post-haste. Rarely a man of show, Ripken took about thirty curtain calls. Then he let teammates push him into taking that long victory lap around the park. Fans shook his hand. Umpires embraced him. Every Angel within reach who didn’t shake his hand bear-hugged him instead. Among the small sea of banners in the park read one particularly telling one:

We consider ourselves the luckiest fans on the face of the earth. Thanks Cal.

“My dad taught that ‘being an everyday player’ is literally every day,” Ripken told Boswell after he passed Gehrig. “My rookie year reinforced it. We tied the Brewers after 161 games. But we lost the last game of the season.”

Ripken’s devotion to his father’s devotion sometimes created issues. When the Orioles canned Cal, Sr. as their manager early in that notorious season-opening 21-game losing streak, Ripken was sorely tempted to leave the only organisation he’d known from his childhood to his major league playing career. He didn’t leave. His father probably wouldn’t have let him even think about it, but Ripken’s loyalty to the Orioles was the only thing equal to that for his family.

He led the Orioles in developing a gallows humour as that sad streak proceeded forward and successor manager (and fellow Hall of Famer) Frank Robinson did what he could with whatever he did or didn’t have. When a brand-new reporter covering the Orioles arrived in the clubhouse for the first time, Ripken beckoned him over. “Join the hostages,” the shortstop deadpanned.

“Ripken runs the risk,” Will observed, “of being remembered more for his work ethic than for the quality of his work.” Well. Ripken won two Most Valuable Player awards and both came in seasons described modestly as earth-shaking. His first MVP came in a season he helped the Orioles win their last-known World Series rings. His second, eight years apart (not quite enough to pass Hall of Famer Willie Mays for the greatest spread between MVPs), shows him earning the highest wins above replacement level (11.5) that year for any infielder, corner or middle, since . . . Gehrig (11.8) in 1927.

Tomorrow, Ripken’s Hall of Fame credentials won’t bat as high in the order as the magnitude of what he achieved a quarter century earlier. If you think Baltimore won’t forget, you should listen to Ripken himself. YouTube’s made the game available to a fare-thee-well, but the Iron Bird himself couldn’t bear to watch it again until last month, says the Baltimore Sun.

“For the longest time,” he told Sun writer Mike Klingaman, “I wanted to preserve the memories I had with my own eyes. I was afraid that if I saw the game as it was, that experience would ruin it. The night was so special that I wanted it to be my memories — and I don’t regret having done that.”

Ask him as Boswell did to name his greatest baseball moments, Ripken—a prostate cancer survivor now who works to raise awareness of preventative checkups, and whose foundation named for his father builds a hundred or more Youth Development Parks in Washington and in 26 states so far—will tell you without hesitation.

“Catching the last out of the World Series in ’83 is my biggest moment,” he says. “There’s a finality, a fulfillment that just hits you in that instant. But the lap around the park was the biggest human moment.”

It’s not that Ripken’s life has lacked for sorrow. He and his family endured his widowed mother’s kidnapping and swift enough return in 2012; his first marriage ended shy of thirty years in 2016. But his son Ryan has become a professional baseball player in the Orioles’ now-on-hold minor league system. And Rachel—the daughter who put hugs and kisses for Daddy on his record night’s T-shirt—is now the director of community service for Colorado University’s athletics department.

Two years after his divorce, Ripken married Anne Arundel County (Maryland) Circuit Court Judge Laura Kiessling. Her Honour changed her name to read the Hon. Laura S. Ripken. Her husband’s long-legendary longevity proves that, unlike some of those appearing before her bench, she won’t have to teach him how to avoid being ruled out of order or held in contempt.