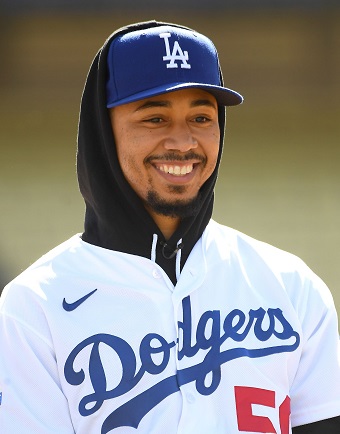 Mookie Betts has 396 million reasons to smile big, and the Dodgers aren’t exactly complaining, either.

On the threshold of the Show’s coronavirus-compelled truncated regular season, the Los Angeles Dodgers—whose 2020 payroll, however pro-rated, is higher than all other teams except a certain one out of the south Bronx—proved they still have the ability to surprise and shock. They’ve made just made Mookie Betts the second-richest player in baseball, behind only a guy down the freeway named Mike Trout.

Last year, after Bryce Harper signed his thirteen-year/$330 million deal with the Philadelphia Phillies, the Los Angeles Angels saw and raised, signing Trout to twelve years and $426 million. Betts gets the twelve years and $396 million. Like Harper and Trout, Betts will be in one place for the rest of his playing career, something both those players wanted when all was said and done.

What a difference 45 years makes.

At 1974’s end, Hall of Fame pitcher Catfish Hunter—made a free agent after Oakland Athletics owner Charlie Finley reneged on a contracted-for insurance payment, thus voiding Hunter’s contract—showed fellow players what a truly free market for their services could bring. The following season, the Dodgers’ best righthanded pitcher refused to sign any contract no matter how lucrative that didn’t include a no-trade clause.

After their then-general manager (Al Campanis) injected personal matters into their talks, the pitcher refused to talk to anyone lower than then-president Peter O’Malley. O’Malley wouldn’t even think about the no-trade clause, either. Andy Messersmith said, essentially, “That’s what you think.”

Today’s Dodgers are owned by a group to whom spending top to bottom is no allergy. And, to whom securing top-of-the-line talent is no vice no matter how much money they might save otherwise. Like Harper and Trout, Betts’s new gigadeal lacks opt-out clauses. It also lacks a no-trade clause, but Betts probably isn’t worried and the Dodgers didn’t exactly flinch: he’d have ten years’ major league time after the fifth year of his new deal finishes, giving him full no-trade protection automatically.

“And if he is traded,” writes Ken Rosenthal of The Athletic, “his deferrals will be converted into present-day dollars, creating even greater financial value in the deal.” His deferrals are $115 million of the total dollars. His up-front $65 million signing bonus, Rosenthal says, “offers greater tax benefits for him as a non-California resident than regular salary and also helps protect him from the possible lingering effects of the pandemic in ’21 and threat of a lockout in ’22. His $17.5 million salaries in both those seasons will be far below his [average annual value], so he will have less to lose.”

Betts became a Dodger, of course, in last winter’s trade sending him and pitcher David Price from the Boston Red Sox, who gained outfielder Alex Verdugo, infield prospect Jeter Downs, and minor-league catcher Connor Wong in return. Betts and Price were part of the team that beat the Dodgers in five games in the 2018 World Series, though Betts had a very modest Series at the plate while Price started and beat them twice in the set. Call it compelling them to join you if you couldn’t beat them.

Different though things are between 1975 and today, the Dodgers generally still prefer shorter-term deals, Rosenthal observes, but this time around the shorter term wasn’t the more attractive one.

The financial strain created by the pandemic for 2020 and possibly ’21, however, made a lucrative short-term extension with Betts — say, two years, $90 million — far less appealing than it might have been before the game shut down in March.

Extending the term to 12 years allowed the Dodgers to keep Betts’ average annual value to $30.4 million, a big number, to be sure, but more than $5 million below Mike Trout’s AAV and even a few hundred thousand below Clayton Kershaw’s. The Dodgers almost certainly would have needed to go to a higher AAV if they had extended Betts in March; the Angels awarded third baseman Anthony Rendon a $35 million average in a seven-year free-agent deal last offseason. Betts’ lower AAV will benefit L.A. under the game’s current competitive-balance tax system, which might be altered in the next collective-bargaining agreement.

So what do the Dodgers get? Betts at this writing is 27 and even the Dodgers don’t expect him to be today’s Betts in ten years, never mind the final two years of the deal. Let’s compare Betts, then, to Harper, Trout, and San Diego’s Manny Machado, baseball’s fourth $300 million plus man who signed for that lucre last year as well.

I’m going to use my real batting average (RBA) metric, removing sacrifice bunts from the equation because, after further thought about it, I don’t think players should be credited for gifting outs to the other guys. Even if I think their managers ought to be credited even less for ordering the gifts no matter the intentions.

The traditional batting average still makes the old school swoon even though they know that a guy who hit .303 lifetime isn’t necessarily better than the guy who hit .302 lifetime. (The former is Pete Rose’s lifetime batting average; the latter, Willie Mays’s. Let’s set a lineup of Roses against a lineup of Mayses and see which lineup puts more runs on the scoreboard.) It also divides hits by official at-bats and treats every hit equally. Do you really need me to ask you what’s missing from official at-bats or tell you not every hit is equal?

My RBA metric takes total bases (which does treat each hit individually and by its actual value), walks, intentional walks (you damn well should get credit when the other guys would rather you take your base than their heads off), sacrifice flies (they’re not premeditated outs and they put runs across the plate), and hit by pitches. (They want to drill you, let it be on their heads and to your credit.) Add them, then divide by total plate appearances.

You knew Mike Trout was the best in the business at this writing, of course, but did you really think he was that far off the charts? You knew Bryce Harper was talented, controversial, and often got hammered because of his inconsistent traditional batting averages, but did you stop to think that he was that much better than his critics have him?

Mookie Betts doesn’t look quite as good as those two because, batting at the absolute top of the order, he doesn’t get as many chances to drive in runs and won’t get as many intentional walks—unless, in this Mad Hatter of a pandemic-shortened season, he just so happens to be the scheduled leadoff hitter in an extra inning for which his team (and every team) gets a free man on second to open the inning.

If you think the other guys are going to let Betts destroy them on the spot (58 of his career 139 home runs have been hit leading off a game or an inning) instead of putting him on to set up a double play right out of the chute, think again. Hard. Especially if it’s the bottom of the extra inning.

Betts also isn’t that sharp when it comes to walks. He’s averaged 76 a season, which isn’t terrible, and is better than Machado’s 54. But it’s not Harper’s 102 or Trout’s 108. A middle-of-the-order man’s team can afford 54 walks a season; a leadoff man’s team needs him to be a lot more selective at the plate and not be afraid to take more walks because his number one job is getting his ass on base by hook, crook, and anything else he can think of.

The Dodgers have time to work with Betts on such things and others. They’ve also looked to the post-pandemic future and decided Betts is that important to their successes to come. They’ve also put a little more pressure on several teams to think long-term about their more obvious top men. Even if those men may not command quite the length and dollars of Betts, Harper, Machado, and Trout.

The Phillies, who have Harper locked in long, must be thinking a little harder about J.T. Realmuto. The Arizona Diamondbacks may start thinking likewise about Ketel Marte, if not now then not too long from now, assuming Marte continues what last year’s breakout began. The Houston Astros may now be thinking harder about George Springer, who also hits the open market at this season’s finish. Baseball’s financial health is better than the owners like to admit, and the time to make those men wealthy and their teams a bit more secure on the field approaches fast.

When the Red Sox dealt Betts and Price to Los Angeles, Betts was vocal enough about pondering his chances on the open market after this season. That was before the coronavirus world tour turned life in general and major league baseball in particular into something between The Twilight Zone and the Mad Hatter’s tea party. At least Betts doesn’t have to scratch his head because this time there really was tea in the cup.