You don’t have to be a Houston Astros fan to appreciate a few of Minute Maid Park’s charms and quirks. (Perhaps an Astro fan will tell me how good Torchy’s Tacos are.) Especially the train that gets a-rollin’ whenever an Astro hits a home run. USA Today photographer Troy Taormina has provided a view for anyone not seated in the appropriate spot at the place:

Notice Taormina took that shot on a day the Astros just so happened to be hosting the New York Yankees. Be reminded, too, that Yankee Stadium ancient and modern alike have one thing the Astros lack: an honest-to-God working train behind their stately playpen:

What you see behind the stadium is, of course, the elevated No. 4 rapid transit train, running down River Avenue past its turnaway point from Jerome Avenue; and, the 161st Street station whose platform begins behind the right field seats. Essentially, the Yankees (with a lot of help from New York taxpayers) built the new yard across the street from the old yard:

The original Yankee Stadium got a major facelift and re-make in 1974-75, which—considering the eventual full flowering of George Steinbrenner’s outsized King-of-Hearts-style rule—prompted assorted wags to say the stadium born as the House That Ruth Built was now the House That Ruthless Rebuilt. The train kept a-rollin’ all night and day long.

But the facelift/re-make robbed baseball fans awaiting the next 4 train of a singular pleasure. Even if you weren’t a Yankee fan you appreciated being able to see much of a game from the southmost platform of the 161st Street station from above and slightly beyond the rear end of the center field bleachers:

I am native to the Bronx and, after my parents moved us to Long Island, I spent many a school break or weekend visiting my maternal grandparents, who were confident and kind enough to give me the run of the city. There’s no false modesty involved when I say that in those years I may have known the New York City elevateds and subways better than a lot of their own motormen did.

If I knew the Yankees were home, I’d take that 4 train (it stopped at Kingsbridge Road, crossing the train’s Jerome Avenue span, which was only a short walk to Grandma and Grandpa’s apartment) to 161st street, move to the platform’s southmost end, and watch for the chance that the Yankees would get their tails kicked from one end of the Bronx to the other.

The trouble for Yankee fans was that, at the time I began turning the city into my personal playground (New York was considerably different in my youth), the odds of the Yankees getting their tails kicked were extremely favourable. In 1966, my own father died, and so did the old imperial Yankees at last. They accomplished something unseen of them since the year the Titanic lost its heavyweight bout against the iceberg: they finished dead last in the American League.

Most of us Met fans since the day they were born couldn’t resist thinking what an absolute bitch karma could be when in the mood. This Met fan couldn’t resist reminding himself of what more knowledgeable observers knew: the remaining Yankee stars were aging (Mickey Mantle, Whitey Ford, Roger Maris, Elston Howard), consistently injured (Jim Bouton), or both (Mantle and Ford); and, the Yankee farm system—except for a small handful of promises who turned out journeymen for assorted reasons (injuries, attitudes)—was suddenly as fertile as the Sahara Desert.

This Met fan since the day they were born also had his first taste of live major league baseball in that ancient, rambling wreck known as the Polo Grounds. The trains rolled behind the Polo Grounds, too, once upon a time. Sort of. 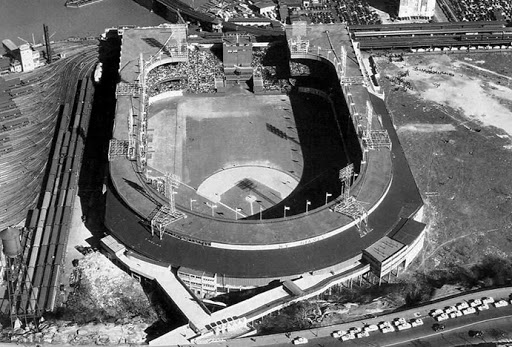 What you see behind and to the right of the far right field stands is the station of the ancient Ninth Avenue El. Above and behind the center field bleachers and clubhouse/office building structure is the portion that survived to be the Polo Grounds Shuttle—until it wasn’t. To the left of the left field stands was the subway yard; as the masthead of this journal shows, you could see trains reposing between the ballpark and the main yard through the rear of the lower deck seats.

New York closed the shuttle in 1958. The underground 158th Street station on the B and D lines of the IND system beneath remain alive today. The Polo Grounds, of course, doesn’t. The Mets played there in 1962 and 1963 until Shea Stadium opened. By the time Grandpa Morris took me to my first Mets game in 1962, the subway yard was long succeeded by a group of apartment buildings and the Ninth Avenue El was ancient history.

The trains didn’t keep a-rollin’ but the Mets did. “Rollin'” was a polite way to put it. The 1962-63 Mets were baseball’s number one comedy troupe. They made Ernie Kovacs’s television surrealism resemble Norman Rockwell. They had Who’s on first, What’s on second, You Didn’t Want To Know’s on third, and You Were Afraid to Ask at shortstop.

The number 7 elevated went right behind Shea Stadium on the right field side and stops at the same station, Willets Point, to take Met fans to Citi Field. The major difference is that you can’t see the train from the Citi Field stands as you could in Shea Stadium. Which made interesting viewing when you arrived early for a game or another event.

Philadelphia’s Baker Bowl. Note the subway yard across the street behind the right field wall. Note, too, the wall lacks the team endorsement for a deodorant soap augmented memorably by a disgruntled Phillies fan in the 1930s . . .

For a very long time the Broad Street Line in Philadelphia rumbled within reach of Shibe Park/Connie Mack Stadium, and runs adjacent to Citizens Bank Park today. Once upon a time, however, the Phillies played in Baker Bowl, and that box of pain (except to Chuck Klein, lefthanded power hitter) sat across the street from a subway yard on the right field wall side. (The legend continues about the disgruntled 1930s fan who took paint to a team endorsement for a certain deodorant soap on the right field wall: “The Phillies use Lifebuoy! . . . and they still stink!“)

The Union Pacific’s Phoenix line passes Chase Field in Arizona. The Metro Blue and Green lines took you to the Metrodome in Minneapolis, if you dared. Navy Yard-Ballpark Station takes you to Nationals Park on the Green Line, but the station’s underground. What’s the fun in that?

The good news if you’re going to Wrigley Field: you get to take the elevated Red Line, and the Addison Street station is a very short walk (about half a city block) from the yard. The bad news: You can’t see the trains from the ballpark. Those houses on Sheffield and Waveland block almost all your views even without the latter-day rooftop bleachers.

It’s not that you go to a baseball game to watch the trains, though if your team is busy getting clobbered on the field that day the trains make for a nice diversion. In Minute Maid Park you need a home run to see the train roll, but at assorted parks past and present the trains kept a-rollin’ all night and day long. Until they didn’t.

An aerial view of Colt Stadium (foreground) adjacent to the newly-opened Astrodome in Houston. The trains didn’t roll to or past them but the cars rolled in and out. In Colt Stadium, alas, so did the mosquitoes.

I’m sure I left a couple of parks out of this survey, but at least Astro fans get a train in the ballpark now. Once upon a time, you got to either Colt Stadium (outdoors) or the Astrodome (The world’s biggest hair dryer—Joe Pepitone, Yankee turned Astro) by motor vehicle. Unless you happened to own a helicopter and were related to a nearby landowner.

If it was Colt Stadium, you had to carry something only slightly more important than hand sanitizer, alas. “This is the only park in the league,” said Hall of Fame outfielder Richie Ashburn, winding his career down as an Original Met in the year that birthed the Mets and the Astros-to-be (born the Colt .45s), “where the women wear insect repellant instead of perfume.”