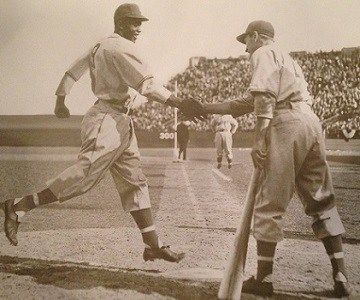 Jackie Robinson accepts George Shuba’s handshake as he finishes a three-run homer in his Montreal Royals debut in 1946. This photograph became known as “A Handshake for the Century,” and a statue in Shuba’s hometown will immortalise the handshake further next year. (Photograph courtesy of Michael Shuba.)

The late George Shuba is said to have kept only one memento from his professional baseball career. That was  the famous photograph of Shuba shaking Jackie Robinson’s hand—after two white teammates aboard ahead of him went to the sideline waiting to see what Shuba would do—as Robinson crossed the plate after hitting his first minor league home run, a three-run “screamer over the left field wall,” as Shuba would remember it.

Robinson and Shuba were Montreal Royals teammates in 1946, after Brooklyn Dodgers mastermind Branch Rickey sent Robinson there to break him into non-Negro Leagues professional baseball. Raised in a climate of racial tolerance in Youngstown, Ohio, Shuba didn’t realise for a long time the impact of what he’d done in that moment when Robinson hit the plate.

“I didn’t care if Jackie Robinson was blue, green, or yellow,” Shuba said in his memoir, My Memories as a Brooklyn Dodger. “He was my teammate and that was all I cared about because his home run just gave us the lead in our season-opening game.”

That Opening Day between the Royals and the Jersey City Giants in Roosevelt Stadium was Robinson’s Royals debut, a day on which he went 4-for-5 with two stolen bases and three runs scored—two after unnerving the opposing pitcher to balk while he was the runner at third base. But the homer handshake from Shuba reverberated long after the game settled into the International League record books.

There are two takes on the image. One is the famous shot from the third base line, Robinson’s Royals uniform number 9 visible on his back as his right hand meets Shuba’s and his left foot is a split second from hitting the plate. The other comes from a first base line view, at the split second Robinson’s foot hit the plate, his right hand still holding Shuba’s in the handshake, and Shuba’s number 13 is visible from behind the right side of his back.

In both Robinson has a big grin on his face and Shuba grins likewise. Neither man knew in the moment that the handshake would prove to transcend the home run. Shuba, the on-deck batter, was mildly astonished that the two teammates scoring ahead of Robinson didn’t stop to wait and shake his hand. So the modest Ohioan of solid Slovakian stock stepped forth from the on-deck circle and did it. 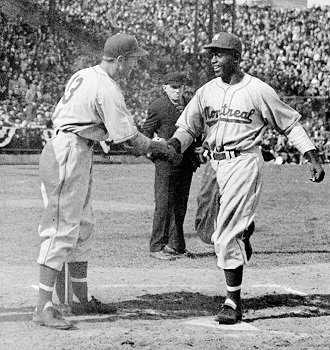 As Robinson actually hit the plate to score on that three-run homer, an Associated Press  photographer caught the handshake with Shuba from the first base side.

Next year, Robinson and Shuba’s home plate handshake will become even more immortal than a pair of photographs. It’ll be depicted in a life-size statue of the two men in Shuba’s native Youngstown. Shuba’s only son, Michael, says the statue’s work is proceeding as planned and mostly on schedule despite the coronavirus disruption of most of the nation’s life today.

“Everything seems to be going as planned,” the younger Shuba told me by telephone last week. He said Robinson’s half of the statue is life-size finished already, as is his father’s life-sized head, with the rest of his father yet to be complete. “We believe our goal that they have can still be met.”

Shuba and the committee in charge of producing, erecting, and dedicating the statue intend for that dedication to happen on April 18, 2021—the 75th anniversary of the game and the home run handshake. Asked whether Robinson’s widow, Rachel, would attend the dedication, Shuba said he only hopes so. “You know, I think she’s 97 now,” he said, “and I just don’t know if she’d be there, but maybe Sharon (the Robinsons’ daughter) will be there.”

The project began with Eric Planey, a New York financial executive who’s native to Youngstown. “He took it upon himself to get the project going,” Shuba said. “Out of the blue one day I get a call from him saying he was working on this and he wanted my blessing. That’s basically how I found out it was going on. I instantly knew that I had to honour Dad and Jackie to the best of my ability when I heard this was going to happen.”

Marc Mellon, the sculptor whose likeness of the late former president George H.W. Bush reposes in the Smithsonian Institute’s National Portrait Gallery, has designed and is building the Robinson-Shuba statue. He recently sat for a newspaper photograph showing the base of Robinson’s full body in front of a small wall of photographs . . . and the base of George Shuba’s head on a pedestal in front of another small wall of photographs.

One former major leaguer is involved directly in the project—Herb Washington, the Olympic-class sprinter who became the most talked-about among Oakland Athletics owner Charlie Finley’s 1970s experiments with designated baserunners, eventually a successful McDonald’s franchiser in Youngstown. Washington didn’t return queries for comment at this writing. 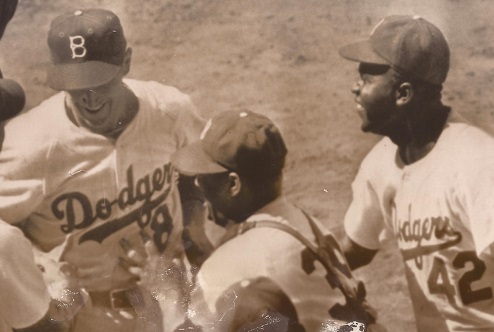 As a baseball player, George Shuba was known for a smooth, natural-looking swing delivering hard line drives that inspired Alabama sportswriter Bill Bingham to nickname him Shotgun. He was also known for being the first man in National League history to hit a pinch home run in a World Series. (Game One, 1953; Hall of Famer Yogi Berra was the first ever to do it, in the 1947 Series.) The bad news is that a combination of Rickey’s caprices and the outfielder’s knees conspired to keep his major league career a short one.

Raised a devout Roman Catholic, whose older brother became a priest and eventually a monsignor, the Shotgun learned tolerance at an early age. “George grew up as an altar boy, and he was taught as a young boy to treat all people equal,” his son said. “In high school they would play alongside black fellows all the time, so it was no big deal to him. It just seemed the right thing to do.”

Robinson and Shuba maintained a friendly relationship during their Brooklyn playing days. Like many ballplayers, though, they drifted apart in the years following their baseball careers. Shuba’s career ended after the 1955 season; Robinson retired before the 1957 season. “I think, just like the rest of the fellows, they got tied up in their lives,” Michael Shuba said. “They talked to each other a few times, but I don’t think very many of them would see each other during that period.”

Robinson became a personnel executive with Chock Full o’Nuts, the coffee company whose lunch restaurants were famous for black staffers, before trying his hand at other businesses aimed at furthering interracial economy and activity. The elder Shuba tried his hand in the sporting goods business, found it wanting, then joined the U.S. Postal Service, eventually becoming an inspector for over a quarter century.

He died at 89 in 2014, but he loved to teach school children about racial tolerance and Jackie Robinson’s significance whenever invited. He was the last living Dodger to have played in Game Seven of the 1955 World Series, the only one the Dodgers won in their Brooklyn years. His pinch hitting appearance for second baseman Don Zimmer in the top of the sixth inadvertently saved the Series for the Bums. 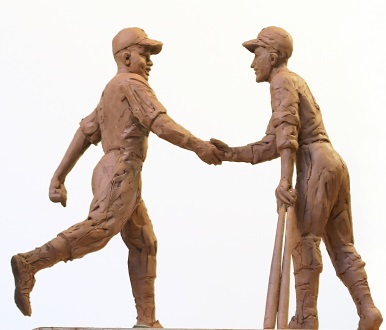 A clay model of the in-progress Robinson-Shuba handshake statue, as designed by sculptor Marc Mellon. (From the Robinson-Shuba Commemorative Statue Project.)

After the Shotgun grounded out for the side, manager Walter Alston moved starting left fielder Junior Gilliam to second base and sent lefthanded thrower Sandy Amoros out to play left. Amoros’s running catch of Berra’s long opposite-field drive, and subsequent peg in to Hall of Fame shortstop Pee Wee Reese, enabled Reese to double up Gil McDougald at first and Brooklyn starting pitcher Johnny Podres to finish his 2-0 shutout.

For a long time, the Shotgun preferred to keep his baseball past quiet while raising two daughters and a son—his wife, Katherine, died two years after her husband—but in time he came to embrace that past, including happily re-enacting the Robinson handshake with children of all races who met him. (Other stories have said he preferred signing autographs for children almost exclusively for a very long time.)

“I took George to the Brooklyn Cyclones [minor league team], and I took him all over the country,” Michael said, “teaching young kids about this moment and what it represented. We went to the Cyclones and they had a re-enactment, one black kid and one white kid, meeting at home plate. George was there to help them and meet them when they met at home plate. To this day I have a baseball I had those two kids sign.”

The son considers his father to have been his best friend in life. “The last ten years of his life, I took him all over and made him enjoy himself,” said Michael, who encouraged his father to connect with Ohio writer Greg Gulas for the memoir after realising his father’s memories of his baseball life remained lucid and well intact.

“Today, I don’t think he would even believe the statue is happening,” the son said. “I’m glad it’s going on, but I wish he would have been here to see it.”