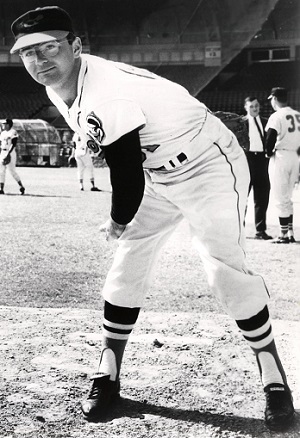 Steve Dalkowski, the minor league pitching legend, during an Orioles spring training. When he finally made the parent club his elbow blew out.

Steve Dalkowski didn’t look like a young man who struck inordinate fear on the mound. The kind of fear that legend says moved a fan behind the plate to say he was about to scoop up his children and get the hell out of there after Dalkowski told him yes, he’d be pitching that night.

He was 5’11” and looked like the prototype for Revenge of the Nerds. If you bumped into him in a supermarket, you might have mistaken Dalkowski for the president of Future Clerks of America. Those who knew him best knew him as a too-pliant young man who listened to everyone, rarely stood his own ground, and was too eager to please.

But if you had to face him on the mound, the legends have had it, you took your life into your hands. Either you were going to swing feebly through a fastball Superman couldn’t out-fly, or draw a walk with the distinct possibility of the ball going through your dome, but you weren’t going to hit him without ten percent timing and ninety percent fortune.

What was good for a laugh on screen is what Dalkowski was, essentially, in the Orioles minor league system. When he pitched for Stockton in the old C-level California League, he did set new. league. records. with exactly 262 strikeouts and 262 walks in 170 innings. Well, he tried, anyway. Gary Kroll actually led the league in strikeouts with 316.

“Most of the Dalkowski stories — throwing a ball through a wooden fence, throwing at hecklers in the stands, hitting hot dog vendors behind home plate, shattering an umpire’s facemask, Ted Williams asking to face him in the batting cage but changing his mind after watching Dalkowski throw — are unverifiable,” wrote pitcher-turned-writer Pat Jordan for Sports Illustrated in 1970, “passed and stretched like folk tales from one minor leaguer to another across the decades.”

Those who saw or played with Dalkowski swore he was wild up and down, never in and out. “If he had been wild inside,” said Frank Zupo, a former catcher in the Show who’d caught Dalkowski in the minors, “he’d have been arrested for murder.”

What was good for anything but laughs is what Dalkowski’s life became when he left baseball after 1965, without seeing a single day’s major league action. A too-heavy drinker during his playing days, who once admitted he did it trying to drown the frustrations he felt trying to make it in baseball, alcohol owned him for 28 years after he left the game.

The lefthander with speed to burn and as much control on and off the mound as a runaway subway train died at 80 last Sunday, after a month-long battle with the coronavirus. At the convalescent home to which his sister Patty Cain brought him in their native Connecticut after finding him at last following decades in alcohol’s wilderness. The miracle may really be not that Dalkowski left almost more legends behind through the minors than Babe Ruth left in the Show but that he lived as long as he did.

He came from the same Connecticut city (New Britain) that produced Rob Dibble, Carl Pavano, and George Springer. He quarterbacked and halfbacked for a pair of unbeaten high school teams while hitting prodigious home runs in summer leagues and pitching like a machine gun. When he graduated high school in 1957, all sixteen Show teams at the time wanted him.

He signed with the Orioles for a $4,000 bonus after graduation, the absolute ceiling under the absurd rule of the time that forced teams signing players to higher bonuses to keep them on their major league rosters for two full seasons. Another legend holds that the Orioles scout who signed him, Frank McGowan, handed him another eight large and a new car.

The apparent secret to the benign-looking lefthander’s power rested in a combination of his arm and wrist action. How else could a kid who looked like baseball’s Mr. Peepers throw the proverbial lamb chop past a pack of wolves, never mind one?

“Steve was able to rotate his shoulder for more leverage. And he just had great joint structure,” his boyhood friend Andy Baylock once told a reporter. “I call it `segmental acceleration.’ It’s almost like a chain reaction took place in his body every time he threw the ball. It was a free-flowing, smooth action. It was God-given.”

They didn’t have the radar gun when Dalkowski went from high school to Kingsport in the old Class D Appalachian League. But Cal Ripken, Sr., who caught Dalkowski at one point (when Dalkowski’s pitches weren’t rising above heads and sailing into screens or stands), once swore the kid threw 110 mph. If that was true, Herb Score was a junkballer by comparison.

The Orioles tried everything to harness the obvious talent and the too-obvious speed. When Birdie Tebbetts managed the Reds and his charges faced Dalkowski in a spring exhibition game, he called Dalkowski’s fastball the radio pitch: “You can’t see it, but you can hear it.”

They also tried harnessing Dalkowski’s taste for hijinks and girls. Emphasis on “tried.” Harnessing his taste for drinks was another matter. He’d learned about it only too well at home; in a New Britain full of hard drinking families Dalkowski’s baseball-loving father was a full blown alcoholic.

One of the lefthander’s minor league roommates was Bo Belinsky, a similarly flaky portsider with less than half Dalkowski’s pitching speed and twice as much street smarts when it came to the young ladies. (Belinsky, too, fought a long battle with the bottle until he dried up to stay a decade before his death in 2001.)

Belinsky’s biographer Maury Allen told of a particularly telling incident when, next door to their hotel room, there once roomed a very comely Miss Universe contestant whose mother wouldn’t let the hungering young wolves get to within a nautical mile of her. Allen swore (in Bo: Pitching and Wooing) that Dalkowski hatched the plot by which he, Belinsky, and their teammates could get a good uncensored look regardless.

Dalkowski procured a drill with a particularly thin bit and drilled several holes in the wall, tiny enough not to be detected but not so tiny that the players with their gimlet eyes couldn’t enjoy the show. Then one knucklehead decided the night time didn’t have to be the wrong time for the show to stop. He brought a flashlight for his evening’s viewing. When he hit the switch, enough of the light beam shot through the pinhole to cause the comely would-be Miss Universe to shriek.

In spring 1962, Belinsky and another Oriole minor league pitcher-playboy, Dean Chance, were gone to the Angels who’d plucked them in the minor league draft. But Dalkowski finally caught a break when eventual Hall of Fame manager Earl Weaver, managing the Orioles’ Elmira (NY) farm, got hold of him.

Dalkowski with his sister, Patty Cain, not long after she returned him to his New Britain home town.

Weaver wreaked a small miracle. He actually got the kid to pitch like a comer. The secret: Weaver told Dalkowski to get rid of every one of the hundreds of different suggestions thrown his way in the past and listen to just one idea and no more.

Throw it easy. Just play catch with the guy behind the plate. Relax. Throw to the glove. Just as Dodger catcher Norm Sherry translated a scout’s deciphering of the flaw that kept Sandy Koufax from becoming the Hall of Famer he finally became. Sandy, you don’t have to throw so hard. Steve, you don’t have to throw so hard, either. Except when Weaver whistles after you get the second strike—then you throw it like you’re a human howitzer.

Dalkowski posted the lowest earned-run average (3.04) of his minor league career while striking out 192 and walking a measly 114 in 160 innings. In spring training 1963, Dalkowski finally made the Orioles and was going to the Show when the team broke camp for Baltimore.

The legend would finally have the chance to put his money where the Orioles’ mouths were. (“They were always billing him as the ‘fastest pitcher alive’,” McGowan once said, “and I think the publicity hurt him.”) They hoped he’d become out of their bullpen what Dick Radatz was with the Red Sox—the guy you didn’t want to see even warming up when the game got late and close.

But pitching to Yankee second baseman Bobby Richardson in an exhibition game after learning he’d make the Orioles at last, Dalkowski fielded a bunt, threw to first, and felt his elbow go off. “They called it a pinched ulna nerve,” wrote the Hartford Courant‘s Don Amore in a remarkable profile last year. “If it happened today, Tommy John surgery would have fixed it. But it happened in the 1960s and Dalkowski was never the same . . . ”

He went back to the minors for 1963, bounced around two more organisations (the Pirates and the Angels) before one more try in the Orioles’s system, then left baseball for good after the 1965 season. He left baseball but the alcohol didn’t leave him. He wouldn’t let it yet.

He drifted. He worked on a San Joaquin Valley farm. He got into and out of barroom brawls that often got him jailed, though ESPN says Bakersfield police called it “nothing serious.” He tried and failed detox; he escaped from one such center. He married twice. Amore wrote that Dalkowski was once found by a southern California family one Christmas Eve and that the family took him in and traced him back to Connecticut.

Two years later, after his second wife died, his sister brought Dalkowski home to New Britain and placed him in a rehabilitation center where he lived the rest of his life. The locals accepted Dalkowski’s return with uncommon grace and affection, remembering the school legend who became a minor league legend, forgiving the inherited alcoholic self-destruction, loving him all over again.

“This is still Steve Dalkowski’s town, as much now as it was when he first left,” wrote the Courant‘s John Altavilla in 1996, “although his circumstances and surroundings are quite different. The people here are happy to see him, glad to know he’s back where they can finally care for him.”

Diagnosed with alcohol-related dementia after his sister brought him home, Dalkowski—who had practically no memory left of the 28 years between leaving baseball and her finding him again—was given a year further to live at best. He beat that projection by over 25 years, slowly coming to terms with his life and even making a few re-connections to baseball.

He threw out a ceremonial first pitch in Camden Yards in 2003 and—after his election to the Baseball Reliquary’s Shrine of the Eternals in 2009—at Dodger Stadium. He looked grizzled and bloated behind his salt-and-pepper beard as he rose from his wheelchair, but when he thrust his arms out in triumph after throwing the ball, he looked like a man who’d just pitched an immaculate inning.

“He’s fine. He’s comfortable. He’s happy,” Cain told Altavilla in ’96. “Right now, we just want to make sure that he’s able to move on with life. Sometimes, I think we’ve taken him to his limits here, but that’s still great, because there were times when none of us even felt we’d be able to get Steve this far.”

“Dave McNally, Cal Ripken Sr., Bo Belinsky and others from his generation in Orioles history have died,” wrote the Baltimore Sun‘s John Eisenberg in 2003, “but Dalkowski, the one everyone thought would go first, is safe at home.” May the angels of the Lord whose forgiveness is there for the asking now keep Dalkowski safe at home in the Elysian Fields.