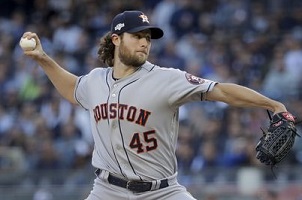 Gerrit Cole was less than his best in Game Three but he let them beat themselves. And enough Yankee fans were worse.

There are reasons why people who don’t live in New York can’t let themselves root for or at least like the Yankees. Even in a season during which the Yankees gave major lessons in survival despite attrition and, like the Astros and maybe more so, won over 100 regular season games despite almost as many Yankees in the infirmary as on the field or at the plate.

A lot of those reasons have to do with a few too many of their fans, unfortunately.

When not behaving as though the Yankees are entitled, mind you to be in the World Series every season on earth, a few too many Yankee fans behave like spoiled brats when things don’t go the Yankees’ way in a game. The look is bad enough if it happens in the regular season. In the postseason it goes from bad enough to downright disgrace.

And there are also times when they do it when one of the other guys suffers a misfortune not of his own making, too.

Edwin Encarnacion looked to have it beaten at first base when his eighth-inning slow grounder was picked by Astros third baseman Alex Bregman but thrown a little off, enough for first baseman Yuli Gurriel to have to reach and bring a sweep tag around Encarnacion’s shoulder area.

Every known video replay showed Gurriel nailed that awkward sweep tag. The Astros called for a review and the original safe call was overturned. The Yankee Stadium faithful in the right field area began throwing debris on the field, though none of it got anywhere near Astros right fielder Josh Reddick.

And they went from bad to worse in the top of the ninth, when Yankee reliever Luis Cessa, turning in a solid turn of work in a lost cause, threw a fastball that ran in on and hit Bregman. There was very audible cheering over that one, too.

“Stuff like that doesn’t belong in baseball,” Reddick said after the Astros banked the 4-1 Game Three win that put them ahead 2-1 in the American League Championship Series Tuesday afternoon.

Reddick, whose second inning launch into the right field seats provided the second Astro run, spoke specifially about trashing the right field area but he could have been talking about the cheers when Bregman got plunked, too.

Listen up, you creatures in the Yankee Stadium right field area. You want to get indignant? I’ll give you several reasons having nothing to do with an overturned call at first base or an unintentional hit by a pitch.

How about your heroes being unable to lay a glove on Gerrit Cole on a day Cole pitched like anything but the virtuoso of earlier in the postseason? When he could have been had but it turned out to be the Yankees who were had?

How about your heroes loading the pillows on Cole with two out in the bottom of the first, after Jose Altuve hit Luis Severino’s first one-out pitch to him into the left field seats in the top of the inning, and Didi Gregorius grounding out weakly enough to second base?

How about three more first-and-second situations for the Yankees ending with a swinging strikeout (Aaron Judge), a fly out to center field (D.J. LaMahieu), and a fly out to right? (Gregorius.)

How about Adam Ottavino leading Zach Britton with first and third, the Yankees getting rid of George Springer in a rundown down the third base line leaving second and third, and then Britton puking the bed with a run-allowing wild pitch and a sacrifice fly to put the final two Astro runs on the board in the seventh?

How about the Yankees going 0-for-6 with runners on second or better and leaving nine men on base all game long?

How about having Cole vulnerable for a change with more walks than strikeouts at one point but the Yankees still unable to touch him if they’d borrowed one of Cardinal pitching coach Mike Maddux’s drivers to swing?

How about the Yankees having nothing to say to the Astro bullpen other than Gleyber Torres hitting a too-little/too-late solo shot into the right field seats in the bottom of the eighth? Oh, yes. You were still a little too busy throwing debris into right field when Torres nailed a Joe Smith sinker that didn’t quite sink enough.

About the only time you really behaved yourselves was when plate umpire Jeff Nelson had to leave the game, after all, an inning after he took a foul off his mask in the and ended up suffering a concussion, prompting Kerwin Danley to move from second base to the plate and no ump in left field the rest of the game.

All you did for yourselves otherwise, you yahoos in the right field region, was make yourselves look ridiculous while the Yankees let even a not-so-sharp Cole still make them look ridiculous. And you made the Astros, who have class to burn as it is, look that much classier while you were at it.

Listen up. I was born in the Bronx. By right I should have been a Yankee fan. But even then Yankee fan entitlement was a stomach turner, no matter how admirable a lot of Yankees happened to be. Even in those imperial years, even to a six year old kid who decided to plight his troth to an infant troupe known as the Mets, in what was left of the Polo Grounds, and who seemed more human than the larger-than-life Bombers.

I cringed during the 1973 National League Championship Series when Pete Rose and Bud Harrelson tangled after a nasty play at second base, the benches and bullpens emptied, and the Shea Stadium crowd let their worst come forward, throwing garbage on the field, until several Mets and the Shea Stadium scoreboard operator begged them to knock it off.

I watched on television when heartsick Senators fans, knowing their team was about to be absconded to Texas, couldn’t let the Second Nats finish the home season-ending win, highlighted when big Frank Howard himself hit one out midway through, and couldn’t let Joe Grzenda pitch to Yankee second baseman Horace Clarke to finish saving it for Paul Lindblad, bursting the dam rioting on the field, forcing a forfeit to the Yankees as the final act of Washington baseball for three decades plus.

I still remember Indians fans bombed out of their trees on Ten Cent Beer Night turning old Muncipal Stadium into a lunatic asylum on the field, which gave sick new meaning to the old park’s nickname as the Mistake on the Lake.

I still remember White Sox fans going from silly to surrealistically stupid practically blowing up old Comiskey Park on Disco Demolition Night. At least Second Nats fans had a legitimate reason to be heartsick on the last home date in 1971.

And yes, I know you’re not exactly the only fans on the planet who’ve turned into wild animals in the stands when things don’t go your way. (Hello, Phillies fans. Hello, Red Sox fans. Among others.) But nobody else’s fans have done that this postseason. Even those few miscreants running over Clayton Kershaw’s jerseys in the Dodger Stadium parking lot waited until after Game Five of the division series to get their spoiled brats on.

But knock it the hell off with the trash tossing and with cheering when the other guy gets hit by a pitch when your pitcher had no intention of even trying to brush him back.

Listen up one more time, you right field area creatures. You’ve got a gorgeous successor park to the old classic Yankee Stadium, and you’ve got a team that actually showed tremendous grace under unconscionable medical pressure this year. But you jerks need either a good fanning—or an animal trainer.