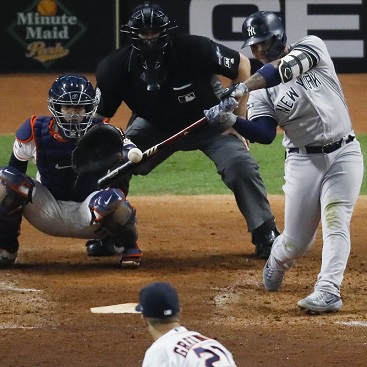 Didn’t the Astros fight like six parts street gang and half a dozen parts cheetahs on speed to get their postseason home field advantage, going 12-2 to finish the season to nail down the point? Didn’t they look just that much better than the 6-8 finishing Yankees when the postseason began?

And hadn’t they survived an unexpectedly arduous division series with the upstart Rays—forcing them to open with Zack Greinke instead of Justin Verlander or Gerrit Cole—to get to the American League Championship Series in the first place? While the Yankees turned out to have it so painfully simple sweeping the suddenly somnambulent Twins to get there that you could be forgiven for suggesting the Yankees might be just a little vulnerable?

There went those ideas in Game One Saturday night.

The Yankees were good on the road this year(.568 winning percentage) but they weren’t supposed to be able to handle the Astros there. They played each other seven times on the regular season with the Astros sweeping the Yankees in three in Minute Maid Park. But somebody forgot to remind the Yankees as they opened the ALCS.

At least, somebody forgot to remind Yankee second baseman Gleyber Torres. The Yankees shut the Astros out 7-0 in Game One and Torres was practically their one-man demolition operation. The Astros’ long term survival may now depend on how well they can keep Torres from even thinking about seeing and raising from Game Two forward.

Nobody’s going to accuse the Astros of being on the ropes after a Game One loss. The Yankees won’t be foolish enough to level that charge. Not even when they punctured the Astros’s hard won, hard desired home field advantage.

“We’ve been in the situation before,” said Astros second baseman Jose Altuve after the game, referring to 2017, when the Astros were down 3-2 in that ALCS but won. “Tomorrow we have Justin, we all know how good we feel about him, so it’s just one game, it’s a seven game series, so we still have a lot of baseball to play.”

With Verlander to start Game Two and Cole to start Game Three, everyone in Astroworld should be feeling good again. No matter how good these Yankees are at finding and exploiting even the tiniest rupture in the other guys’ armour.

But who the hell is Gleyber Torres? Oh, yeah—he’s the guy who became a Yankee when they traded Aroldis Chapman to the Cubs in the middle of 2016. But now he’s the youngest Yankee ever to drive in five in a single postseason game. And his clutch hit reputation is beginning to fan out beyond the Bronx.

You expected trouble going in with the Aaron Judges, Giancarlo Stantons, D.J. LaMahieus, Edwin Encarnacions, and Brett Gardners. The last one from whom you expected any pinstriped lip, never mind bat, is a kid middle infielder who may have hit the most quiet 38 regular season home runs of the year.

Outside New York, Torres isn’t exactly the Yankees’ biggest star yet. But on a night when Yankee starter Masahiro Tanaka was as untouchable as he was very touchable in the regular season, and Greinke proved vulnerable enough if not quite the pinata the Rays made out of him in the division series, Torres became the last guy the Astros wanted to see at the plate. Or anywhere else, for that matter.

“Man, they’re going to be telling stories about that kid for a while,” said Judge after the game. “He’s going to be a Yankee great, I know it. He just comes to work every single day. He’s always got a smile on his face. No situation is too big. I’ll see him in the box, bases loaded, big situation and he’ll give us a little smile in the dugout like he knows he’s going to go up there and do his job.”

At first it looked as though Tanaka and Greinke would turn Game One into a pitching clinic, if not quite the ones put on by Nationals pitchers Anibal Sanchez and Max Scherzer in the first two National League Championship Series games. Tanaka looked as untouchable as he normally does against the postseason Astros, and Greinke looked nothing like the guy who’d been humiliated at the hands and tails of the Rays.

“I thought Zack did a good job giving us a chance to win,” said Astros third baseman Alex Bregman, “and we just didn’t do anything offensively.”

“When you’re facing really good pitching, it makes hitting even harder,” said mostly struggling Astros center fielder George Springer, their 2017 World Series MVP but hitting a buck twenty in this postseason to date. “Hitting’s hard. But that being said, we’re a good team, and we understand that, so we’ve got to grind and string together some at-bats and we’ll see what happens.”

As the top of the fourth began each side had one base hit apiece and they’d both been negated by inning-ending double plays. Then LaMahieu opened the Yankee fourth with a base hit and swiped second while Judge struck out swinging on one of Grienke’s nastier sliders of the night. Up stepped Torres, whom Greinke struck out swinging to end the first. And he drove one to the back of left center bounding off the fence to score LaMahieu with the game’s first run.

Torres and Greinke squared off again in the sixth after Judge led off flying out to Astros center fielder George Springer. Once again Greinke’s first service looked just too good to Torres. This one got hammered into the middle of the Crawford Boxes.

And after a six-pitch, full count, wrestling strikeout to Encarnacion, Greinke battled Giancarlo Stanton—who’d only gotten to play eighteen regular season games thanks to two trips to the injured list—and, after wriggling his way to a full count after opening 0-2, Stanton nailed a fastball just under the middle of the plate and sent it into the Astros’ bullpen behind the right center field fence.

An inning later, Torres was in the middle of it yet again. With two outs, Yankee shortstop Didi Gregorius, LaMahieu, and Judge singled back-to-back-to-back, all into right field, off Astros reliever Ryan Pressly, before Torres sent the first pair home with a bloop single to center and helped himself to second when Springer threw in futilely toward the plate.

It was the kind of night on which Torres even making an out proved productive enough. With reliever Bryan Abreu on the mound for the top of the ninth Yankee third baseman Gio Urshela hit the first pitch of the inning, a slightly hanging slider, into the right field seats. Then with one out LaMahieu walked, Judge singled him to third, and—with the Astro infield drawn in just enough—Torres whacked a grounder to an oncoming shortstop Carlos Correa.

The good news: Correa pounced on the run to throw Torres out handily enough. The bad news: LaMahieu got such an excellent jump off third he could score the seventh Yankee run without fear even with Correa all over the Torres grounder well onto the infield grass.

The Astros hurt themselves when it was still a one-run game, though. In the bottom of the fifth, Bregman, their no-questions-asked MVP candidate, worked Tanaka for a leadoff walk and Yordan Alvarez, their probable no-questions-asked Rookie of the Year, slashed a line drive to right.

As Bregman led a little too far off first, as in more than half way to second, obviously thinking of third base as his immediate destination, Judge ran to snare Alvarez’s rope. Then the tall Yankee with the toothy grin of a kid a third his age fired in to first. Bregman slipped running back to the pillow but it almost wouldn’t have mattered since he’d had a bigger lead than the law allowed in the first place.

Was Judge catching Alvarez’s liner a guarantee? Fifty-fifty at best. But he has one of the better throwing arms among American League right fielders and with Bregman that far off the pillow, slip back or no, Bregman was dead meat.

It negated the spectacular theft Bregman committed in the top of the third, when he took a spinning leap behind third with his glove arm up like the Statue of Liberty to turn Urshela’s nasty line drive, which probably would have gone further up the line for extra bases, into a nasty out.

Tanaka can’t beat the Astros in the regular season, but in the postseason he looks like an ogre against them, taking a 2.00 lifetime postseason ERA against them into Game Two. He worked the corners like a craftsman and left the usually smart hitting Astros looking half lost at the plate.

“He was throwing the ball really good today,” said Altuve. “He was hitting spots with the slider, split, and fastball. He makes it out pretty good. You have to tip your hat to that. He got a late break, normally you can see the spin, but we couldn’t see anything.”

When they got into the Yankees’ effective bullpen, they actually pried a couple of base hits out of Adam Ottavino, back-to-back singles by Michael Brantley and Altuve, but Ottavino lured Bregman into dialing an inning-ending Area Code 6-4-3.

The Astros bullpen is usually one of the league’s best, too, but Pressly didn’t look comfortable in his turn and Abreu’s inexperience was exploited a little too readily. Especially against a Yankee team who—knowing Verlander and Cole awaited them in Games Two and Three—treated Game One like a must-win contest.

“They threw the first punch in Game One,” said Astros manager A.J. Hinch. “We get to the next day. We can punch right back tomorrow. I don’t think they’re going to be too comfortable tomorrow coming to the ballpark thinking they’ve got an easy game ahead of themselves.”

Verlander gives the Astros a far above average chance to punch back in Game Two. The last thing they want is going to the south Bronx in the hole. The Yankees have ways of burying people once they’re in holes against them. One of them is a 22-year-old second baseman who prefers hitting with men on base and has the numbers to prove it so far.

“The way he’s able to get to all kinds of pitches on different planes is impressive,” said Yankee relief pitcher Zach Britton, who worked a near-spotless eighth (one walk, two punchouts) Saturday night.

“As a pitcher, you know you have to executive every single pitch throughout an at-bat or you know he’s going to beat you,” Britton continued. “That’s where the bat-to-ball skill comes in. It’s crazy. You just don’t see it in such a young player.”