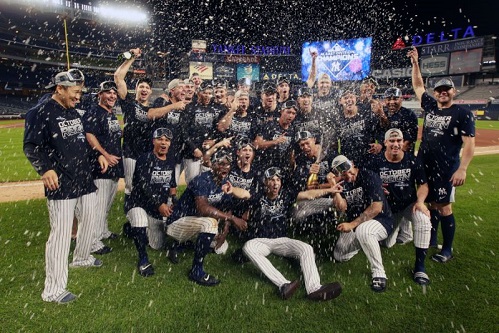 To the best of anyone’s knowledge, no Yankee was injured during the making of this division-clinching celebration.

Future baseball trivia contests should feature this question: “Name the team that won the 2019 American League East despite making a M*A*S*H triage seem like a day camp’s first aid station.” Then, they should add, “P.S. Name the American League’s 2019 Manager of the Year—according to major league baseball and the American Red Cross.”

Aaron Boone must have days when he thinks he’s not a major league manager but the hapless chief administrator of an overworked urgent care clinic. The Broken Bombers  must have days when they think the umpire isn’t going to start a game hollering “Play ball!” but pulling out a bugle to sound sick call.

They locked down the American League East Thursday night with their 100th win, beating the hapless, Mike Trout-less Angels 9-1 at home in St. Elsewhere, Yankee Stadium. And they still had twelve players—not including the apparently terminally hapless Jacoby Ellsbury—either on the injured list or listed day-to-day with one or another ailment.

“Nothing has got in their way,” said Boone after the game. “Whatever has come adversity-wise, they faced it and powered right through it.” As almost usual, Boone deflected most attention toward his players, rather modestly for the first manager to win 100 games in each of his first two seasons on the job.

Nobody else has done that. Not John McGraw. Not Connie Mack. Not Miller Huggins, Joe McCarthy, or Casey Stengel. Not Walter Alston, Earl Weaver, Sparky Anderson, Davey Johnson, Tony LaRussa, Bobby Cox, or Terry Francona. The man who once broke Boston hearts by nailing the 2003 American League pennant with an eleventh-inning home run in the old Yankee Stadium sits alone with those C-notes.

Boone may not be one of the game’s premier tacticians or strategists, but maybe he doesn’t have to be for now. Just sending a Yankee team to the field every day in spite of the ceaseless call of calamity was probably enough for the 46-year-old skipper. That and a few tranquilisers.

There’s no truth to any speculation that Johns Hopkins is negotiating for the rights to present the Yankees as medical school exhibits yet. But don’t be shocked if the talks begin any time soon.

Only the Astros among the American League’s powerhouses had an injury overload anywhere near the one that accompanied the Yankees this year. They were episodes of Bones, House, Private Practise, Grey’s Anatomy, E.R., Chicago Hope, Medical Center, and Marcus Welby, M.D. on any given day of the week. Their bangs, bruises, and batterings got so profound so often that Yankee fans could have been forgiven if they felt compelled to claim the New England Journal of Medicine as this year’s Yankee yearbook.

There may not be a baseball team alive that figured out ways to win 100 regular season games and counting despite putting every New York area emergency room on double red alert. And it didn’t seem like any single Yankee faction becoming so injury prone. The 2019 injury bug did the equal-opportunity Yankee panky.

About the only Yankees on or near the field who didn’t have dates with the doctors were the bat and ball boys and girls. Boone was probably ready more than once a week to decide whether he needed an internist on call—or Frasier.

And when the Yankees closed out the Angels Thursday night they didn’t dare dogpile, chest bump, forearm bump, fist bump, jersey strip, or anything else to which celebrating baseball players take these days when celebrating arduous wins or even divisional clinches. With their luck, five Yankees might have ended up in traction.

“We’re just trying to avoid injuries,” deadpanned second baseman D.J. LaMahieu, whose three-run homer with two out in the bottom of the third began the Thursday night thrashing. All things considered, it’s a wonder making that comment didn’t instigate a case of lockjaw.

“There’s a couple guys that are irreplaceable here,” said catcher Austin Romine in April, little knowing he’d have to step in bigger for Gary Sanchez who just went down with a tight groin and could be gone until the postseason rounds, “but we’ve got to find a way to do it. We’re still winning games. We’ve got guys stepping up left and right.” Careful. With the Yankees’ luck, one of them is liable to twist an ankle on the landing.

Guys stepping up left and right? The Yankees practically led the league in reaching down and finding help on the farm, lots of it, enough to make you wonder—even allowing their seemingly infinite financial resources—why other teams who aren’t as financially strapped as they let you believe can’t figure out as well as the Yankees how to re-tool on the fly without tanking and within in far less extreme circumstances.

That should be good enough to earn longtime general manager Brian Cashman consideration as baseball’s Executive of the Year. Whether he gets it from the game or from the American Medical Association probably doesn’t matter.

They’ve used 53 different players and sent thirty to the injured list this year, the latter being the most for any team since 2004. And they couldn’t even win Thursday night without more medical emergencies preceding it.

Relief pitcher Dellin Betances was barely back from shoulder and lat muscle issues that kept him drydocked until Sunday—when he faced two Blue Jays in the bottom of the fourth and struck them both out . . . then somehow incurred a partial Achilles tendon tear doing the happy dance after the second punchout.  Surgery he won’t need. But his season ended before it began even partially.

And Aaron Judge is being watched day-to-day after Hizzoner landed hard on his right shoulder Wednesday night trying for a diving catch.

The Yankees already had to live a lot of the season without Judge, Betances, Sanchez, Luis Severino, Aaron Hicks, Miguel Andjuar, Didi Gregorius, Giancarlo Stanton, Jake Barrett, and Greg Bird. Among others. They’ll have to live the rest of the season and postseason without David Hale, Jonathan Holder, and Mike Tauchman. Possibly among others. Tauchman went from an obscure spring acquisition from the Rockies to a co-household name with Gio Urshela—until he, too, pulled up injured with a likely season-ending calf strain.

They’ve managed to comport themselves like overly seasoned professionals in spite of the still-preponderant youth of the team. (Their average age: 28.) But it wasn’t easy this year. Even the most stoic professional can get frazzled when reporting to work the next day to discover yet another colleague in need of major repairs.

And you’d have to be either ignorant or a pure Yankee hater not to appreciate an irony in this year’s AL East conquest. The last time the Yankees won the division, Hall of Famer in waiting Derek Jeter wrecked his ankle in the twelfth inning of what turned into a sweep out of their 2012 division series by the Tigers. They wouldn’t be human if they didn’t have even a tiny similar fear of even a hint of similar calamity awaiting them this time.

It may rankle Yankee fans that their heroes have only one 21st Century World Series ring to the rival Red Sox’s four. But they shouldn’t be too hard on the Yankees if they don’t quite make it back to the Promised Land this time around. If baseball’s cliches include that great or even persevering teams become the forgotten men once they don’t reach the Promised Land, these Yankees have a chance to stand it on its own head.