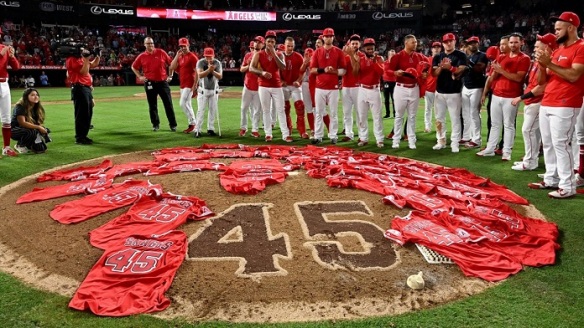 Mike Trout (in blue T-shirt, front) and the Angels paid a final tribute to Tyler Skaggs after blowing out the Mariners in a combined no-hitter in their first game home following Skaggs’s unexpected death. The toxicology report now raises even more questions.

No, I don’t know yet what delivered Tyler Skaggs into the clutch of opioids, whether a one-time or more-than-once deliverance. And neither do you. But that doesn’t stop people from drawing conclusions, and it doesn’t stop some of those conclusions ranging from the dismissive to the ridiculous all the way back to the obscene.

The prospect of the 27-year-old Skaggs merely being reckless in taking even once doses of fetanyl and oxycodone and maybe washing them down at once with a stiff drink is a prospect not to have been wished in the hurricane of grief his death whipped up all around baseball in early July.

“Now, we are faced with our own emotions,” writes USA Today baseball columnist Bob Nightengale, “knowing the death wasn’t an act of God or a suicide, but self-induced by the careless use of pain killers.” Remember that “careless” doesn’t mean reckless, exclusively.

We’re also faced with asking honestly whether Skaggs acted entirely on his own, as the Angels arrived in Texas for a pre-All Star break set against the Rangers, or whether he was prompted persuasively enough by someone who thought he was doing Skaggs a pain management favour.

Skaggs’s family wants to know for dead last certain. They’ve hired Texas attorney Rusty Hardin to help them know. “We are heartbroken to learn that the passing of our beloved Tyler was the result of a combination of dangerous drugs and alcohol,’’ they said in a formal statement. “That is completely out of character for someone who worked so hard to become a Major League Baseball player and had a very promising future in the game he loved so much.”

The Angels want to know, too. Suspicions point as I referred on Friday, toward a so far unidentified Angels employee the family and perhaps the team itself thinks or fears had a hand in Skaggs’s demise, perhaps by supplying him fetanyl and oxycodone through other than lawful or proper medical means.

“Everyone’s searching for facts, and everyone within the organization wants facts,’’ said general manager Billy Eppler at a press session before the Angels played the Red Sox Friday night. “Which is why we are actively cooperating with an investigation. It kind of goes without saying that I cannot comment more on the situation until the police conclude their investigation.”

Asked whether the employee the Skaggs family suspects is still with the team, Eppler wouldn’t answer. “I’m sorry,” the GM replied. “I really understand your asking that question, but again, it’s an active investigation.” Eppler said only that the Angels have told investigators everything they know. Which may or may not yet be anything substantial. Thus the proverbial thickening of the plot.

The least-kept secret in professional sports is that performing athletes are not always the best tended alive by their teams or supervising organisations when it comes to injuries or illnesses. For too many decades sports medicine involved the fastest remedy available to get the player back onto the field, the court, the course, as fast as possible.

And for too many of the same decades athletes took to their own measures of desperation to get back to the field, the court, the course, as soon as they could, within what they considered reason, the better to keep someone else from taking their jobs when they knew in their heart of hearts that there was always someone else behind them just itching for the chance.

It was one thing, for example, to know that there were enough baseball players dabbling in actual or alleged performance-enhancing substances because they were led somehow to believe the dabbling might help them inflate their performance papers. But the arguable Joe Valachi of the actual or alleged PEDs, the late third baseman Ken Caminiti, stepped forth after his career ended to say it started for him not out of any statistical interest but out of desperation to escape the deep pain of a 1996 shoulder injury.

Caminiti surely wasn’t alone in turning that way when few to none of his team’s medical personnel seemed able to provide such relief. To name another somewhat notorious example, longtime Yankee pitcher Andy Pettitte is on record as saying he took to a brief usage of human growth hormone because his continuing elbow pain finally drove him mad enough to give it a try.

Skaggs had an injury history. After the Diamondbacks traded him back to the Angels for 2014 (he’d previously gone to the Snakes with current Nationals pitcher Patrick Corbin in a deal making pitcher Dan Haren an Angel), Skaggs pitched in eighteen games before his elbow sent him to Tommy John surgery, causing him to miss the entire 2015 season.

He returned to make ten 2016 starts, then missed 98 days in 2017 with a strained oblique. In 2018, Skaggs opened with sixteen starts and a 2.64 ERA before his adductor muscle gave out and cost him three months. And this year, he sprained his left ankle after making three season-opening starts. costing him most of April.

“[A] normally developed, well-nourished and well-hydrated large build adult,” the toxicology report described him. Except that it couldn’t determine whether or to what extend he remained in any pain. Physical or otherwise. That, too, would be something both his family and the Angels should want to know.

Skaggs otherwise was known as a likeable fellow who was freshly married when spring training began this year and had everything else for which to live. He loved his young wife, Carli; he loved his teammates; he loved the game. The hurricane of grief his death provoked around baseball was real.

So were the emotions when, after the Rangers kindly canceled the game the day Skaggs died, they re-convened with Skaggs’s uniform number 45 in the dirt behind the pitching rubber in the Angels’s uniform font style. And, when the Angels beat them, 9-5.

And, especially, when the Angels returned home, the players fashioned a loving pre-game tribute including Skaggs’s mother throwing out a ceremonial first pitch, before the Angels hit the field one and all wearing Skaggs jerseys and beat the Mariners in a combined no-hitter and an 11-0 blowout. Paced by Skaggs’s closest friend and team leader Mike Trout blowing the lid off all emotion with a two-run homer in the first inning.

And, after the game, when Trout and his fellow Angels covered the entire pitching mound except for the number 45 behind the rubber with the Skaggs jerseys they wore all game long.

The toxicology report wasn’t close to completion that night. Now that it is, the questions continue as only too many seem to think they have the answers. Nightengale isolates several of the key questions. Did Skaggs slip somehow into drug addiction? Did anyone know to the extent that they may carry a degree of guilt for lack of previous intervention? Did something appear to indicate such a problem?

But Nightengale doesn’t stop there. Appropriately. “This was a young main in pain. Perhaps more physical than even the doctors and trainers knew. Maybe more mental than even any team therapist knew,” he writes. “It will be a bigger tragedy if we never understand why. Prescription painkillers are a scourge in this country, and professional sports—with catastrophic injuries and the expectation to play through the pain they cause—are ripe for potential abuse.”

This wasn’t Cubs second baseman Ken Hubbs, who’d only taken up flying a few months earlier, flying his single-engine Cessna propeller airplane over Utah and crashing to his death in spring 1964, running into an atmospheric disturbance he was probably too inexperienced to navigate successfully. The tragic irony: Hubbs took up flying to conquer his fear of it.

This wasn’t Yankee legend Thurman Munson, who’d bought a sophisticated Cessna Citation jet the better to spend more time with his wife and children during the season when the Yankee schedule allowed, and crashed at an airport near his Ohio home while practising evening landings. Munson was still well short of full qualification to handle the complex jet entirely on his own.

This wasn’t the Indians’ spring training boat crash of 1993. In which relief pitchers Tim Olin and Steve Crews were killed when their off-day boating with Crews at the wheel ended with a crash into a dock, killing Crews at once, with Olin dying the next day and pitching teammate Bob Ojeda suffering a severed scalp. Crews was considered legally drunk at the time of the crash.

This wasn’t Marlins pitcher Jose Fernandez, as effervescent a young player as you ever saw, around whom the Marlins only thought they’d build for seasons to follow. He and two friends drank somewhat copiously before boarding his 32-foot boat, Kaught Looking, and with Fernandez at the wheel crashed a jetty killing all three. Fernandez’s estate faces litigation from the families of the other two passengers; Fernandez’s attorney argues the pitcher was framed in the crash investigation.

This wasn’t Oscar Taveras, the young Cardinal who electrified the game in his postseason debut, hitting a pinch homer in the 2014 National League division series against the Dodgers. (He’d also hit one out in his first regular-season major league game that year.) He was killed with his girlfriend a month later when his Camaro ran off a wet road in their native Dominican Republic. Driving six times the legal limit for drunk driving, perhaps. Seven years after another Cardinal, pitcher Josh Hancock, died in a DUI crash.

On the other hand, Ojeda needed and received copious therapy to relieve him of suicidal thoughts following that ferocious case of survivor’s guilt. And Rays minor league pitcher Blake Bivens will need about a hundred times that to survive the murder of his wife, baby son, and mother-in-law last week, for which his teenage brother-in-law has been charged.

Hubbs and Munson died from inexperience. Crews, Fernandez, and Taveras could be argued to have died irresponsibly and likewise causing others’ deaths. But we don’t know yet what led Skaggs to the Elysian Fields. Was it irresponsibility? Did he battle heretofore unsuspected and/or undetected drug addiction or even mental illness to even a small degree? Did he have physical pain greater than his known baseball injuries?

One dismisses the kind of reckless thinking that prompts the likes of one particularly witless Tweeter who dismisses Skaggs as a junkie. Ignorant of the point that “junkie” customarily applies to heroin addicts, heroin being nicknamed “junk” for a very long time.

Absent any final answers otherwise, it’s wise not to assume the judges’ robes. As if even wisdom would prevent that from happening, anyway.