He didn’t quite demand “Who died and left you the Baseball Police?” but Max Muncy splashed Madison Bumgarner’s self-righteousness Sunday afternoon . . .

When Madison Bumgarner’s pitching career ends, a good many people will remember him as a postseason lancer who throve and delivered when the heat was nuclear. Appropriately. And a good many people likewise will remember him as a classic get-off-my-lawn type with the petulance of a nursery school child whenever any hitter had the audacity to hit a home run off him. Also, appropriately.

The get-off-my-lawn Bumgarner arrived Sunday afternoon in AT&T Park when Dodgers infielder Max Muncy greeted him in the top of the first. The lefthanded Bumgarner threw the lefthanded Muncy a fastball fat and juicy. And Muncy drove it past about five kayakers into McCovey Cove behind the right field promenade.

All Muncy did after connecting was take a few moderate steps up the line before starting his home run jog. If you’re measuring bat flips, Muncy’s was more like a bat dump. And as he rounded first, Bumgarner—who suffers neither fools nor home run hitters gladly—growled at Muncy: “Don’t watch the ball, run!”

Muncy wasn’t exactly unprepared as he rounded first heading for second. As he quoted himself after the Dodgers banked the 1-0 win: “I just told him if he doesn’t want me to watch the ball, go get it out of the ocean.”

If you thought “Don’t look at me!”/”Don’t look at him” troll T-shirts whipped up fast after Bumgarner roared just that at then-Dodger Yasiel Puig a few years ago, you hadn’t seen anything yet: 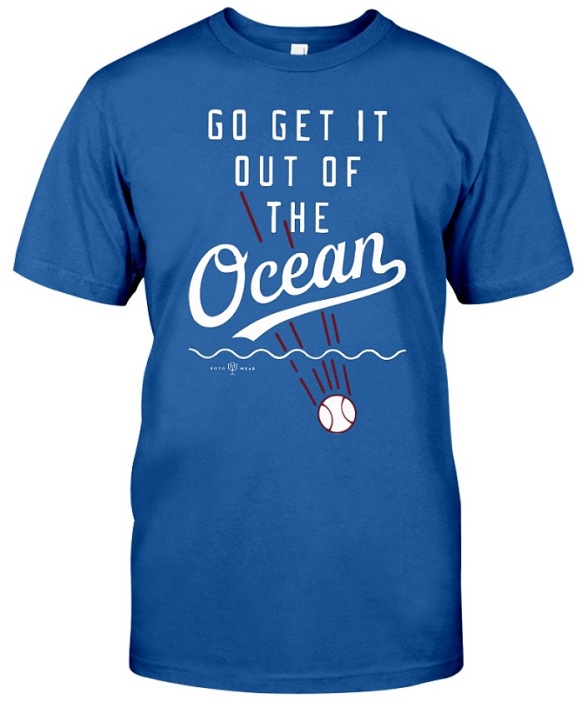 That shirt hit the cyberground almost as fast as Muncy’s blast flew into the cove. Its arrival made the old “Don’t look at me!” troll shirts seem on a time delay.

About the only thing Sunday’s game did otherwise was resurrect Bumgarner’s likely trade value should the Giants finally acquiesce to reality and kick off a painful but necessary remake/remodel. He pitched seven innings and, after Muncy put his ego into the drink, scattered three more hits while striking out five and surrendering no other runs.

That wasn’t even close to the story of the game.

Bumgarner is self-aware enough to know he comes off like the kind of grump that divides baseball fans almost in half. For every old-school grouse who thought Bumgarner was not only within his rights to let Muncy have what for rounding first, but also a little chin music, maestro, his next time up, there’s a new-school graduate who thinks Bumgarner’s still too young to become a boring old fart playing a game in which he happens to earn a ducal dollop of dollars while playing it.

“I can’t even say it with a straight face,” the lefthander told reporters after the game, and he couldn’t. Bumgarner looked like he was trying to stifle the kind of nervous snicker you might emit when something strikes you funny during something like a funeral.

“I was going to say the more I think about it, you’ve got to just let the kids play, that’s what everybody is saying, but . . . he struck a pose and walked further than I liked . . . They want to let everybody be themselves. Let me by myself —that’s me, you know? I’d just as soon fight than walk or whatever. You just do your thing, I’ll do mine. Everybody is different. I can’t speak for everybody else, but that’s just how I want to play. And that’s how I’m going to.”

Bumgarner has one point. There’s nothing wrong with letting him be himself, either. If he wants to treat baseball as though he ought to be pitching in a business suit instead of a Giants uniform, that’s his right and he’s earned it.

Except that he knows others enjoy the same right to be themselves. If he wants to bawl out a hitter who just laid waste to one of his pitches and has the audacity to enjoy having done it, then what he’s really saying is he doesn’t really respect the other guy’s right to be himself, too.

If Bumgarner wants to fume because he was sent into orbit, fine. But there’s a reason why Muncy’s basepath comeback kicked off a new supply of troll shirts. Bumgarner doesn’t want hitters admiring their home runs off him, whether or not they land among a crowd of kayakers on the waters? And he’s not exactly out there trying to serve them pitches they can hit for those home runs.

Unless there’s some personal animosity between them otherwise, a hitter who’s just sent one seaborne isn’t looking to add insult to injury when he has fun with it as it sails away and after it lands. (Pirates, try to remember that the next time Derek Dietrich plants one into the Allegheny River.) Neither is a pitcher who can’t resist a little gesture of triumph after he survives a very tough plate appearance by striking the batter out at last.

Let’s have no nonsense about it all just being MadBum being the competitor he is. “‘Enjoy the view, bitch, because I’m gonna strike your sorry ass out next time’ is being a competitor,” says Deadspin‘s Albert Burneko. “‘Stop watching your home run, it’s rude!’ is being the cops.”

Forget the business suit, maybe Bumgarner ought to take the mound in a police uniform. Gee, Officer Krupke—krup you!

It’s not as though Bumgarner doesn’t understand the thrill. This is a pitcher who’s hit eighteen home runs himself during his eleven-season career. Including a pair on Opening Day 2017. You might suggest Bumgarner take off the gun belt and billy club and have himself a ball around the bases the next time he hits one for distance.

But you can see the troll shirts now: “Fun for me but not for thee!”