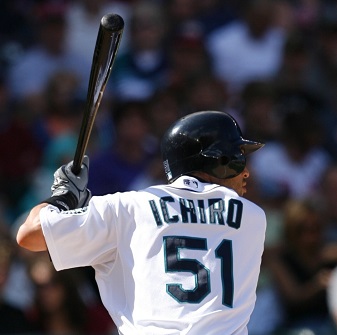 “I am honored to end my big league career where it started, with Seattle, and think it is fitting that my last games as a professional were played in my home country of Japan. I want to thank not only the Mariners, but the Yankees and Marlins, for the opportunity to play in MLB, and I want to thank the fans in both the U.S. and Japan for all the support they have always given me.”—Ichiro Suzuki’s retirement statement.

The good news is that we’ll be spared one of those slightly garish farewell tours such as those attached to several longtime baseball greats in the past decade. The bad is that we’ll still be without Ichiro Suzuki from now on.

“His retirement is bittersweet,” Hall of Famer Ken Griffey, Jr. is quoted as saying, “but I need another member to the Hall of Fame so I am looking forward to that. I got one this year and now I just have to wait a few more years for my other guy to get there.”

Griffey refers, of course, to Edgar Martinez, who’ll be inducted into Cooperstown in July, and Ichiro, who retired after suiting up for the Mariners one more time to play a pair of major league season openers against the Athletics in his native Japan this week.

Retiring wasn’t exactly as simple for Ichiro as it once was to send some base hits all over the outfield or run down flies to right or steal bases like they had his name on them. Neither was becoming a professional baseball player, as dearly as he’s loved the game.

Going out hitless in two games and with no on-base presence but a walk in his farewell play probably wasn’t quite the way he wanted to end the career that’s going to put him into the Hall of Fame. Growing up under a training regimen imposed by his father that he himself once said on the record “bordered on child abuse” makes a hitless pair of final games seem like a leisurely stroll.

Paradoxically, Ichiro kept much of what his father taught him to do as his adult training and conditioning regimen. At the same time, he became known around the game for a quirky wit and a penchant for ribaldry, most notoriously in pre-game pep talks he’d unhorse in All-Star clubhouses that left his fellow All-Stars gasping for air from laughing so hard.

That from a man who refused to slam his bat out of frustration whenever he came up short at the plate because it would be (his words) like a carpenter throwing his tools around. A man whose wife once said she’d hear him crying in his sleep during slumps. A man who has said often enough that without baseball he would die.

There’ve been those who know him well enough testifying that his obsessive communion with baseball’s history is partially what ESPN: The Magazine writer Wright Thompson wrote, in a jarring profile over a year ago, was finding a way to “fill the place once occupied by his father.” (Father and son have been estranged both by the childhood brutalitarianism and by the father once mismanaging the son’s finances into a six-figure back-taxes bill; Ichiro’s wife now handles those.)

Ichiro’s visited the Hall of Fame the way children love to visit their grandparents—as often as he can. He’s done it more than any active player. And he spends his time there cradling items such as a bat used by George Sisler (whose single-season hits record Ichiro broke) and a glove used by Lou Gehrig. Hall of Fame president Jeff Idelson swears Ichiro was trying to get into their long-departed heads in the moments they used those items.

On a Mariners road trip once upon a time, Ichiro went out of his way to visit the Negro Leagues Baseball Museum and, while he was at it, forge a friendship with the late Buck O’Neil. There are American and other-origin players today who don’t have that deep a feel and sense of baseball’s history. And this is a man who’s revered in his native land the way Americans revere Gehrig, Babe Ruth, Willie Mays, Sandy Koufax, Bob Gibson, and Hank Aaron

Braden Bishop can tell his grandchildren that his first official major league appearance was replacing Ichiro in right field in Ichiro’s next-to-last major league game, a slugfest the Mariners won 9-7. The following day, the Mariners beat the A’s 5-4; Ichiro went 0-for-4 with a strikeout.

His American career began with a phalanx of Japanese media following every move and more rounds of tacky jokes and skepticism than his accomplishments since have obscured. There were those who said major league pitching would tie him up into a package marked “Return to Sender.”

Fat chance. In fact, I can think of a trio of Hall of Famers he wore out at the plate whenever he faced them: Greg Maddux (.667 BA), Randy Johnson (.444), and Mariano Rivera (.400). As a matter of fact, on 18 September 2009, down the stretch of a season that ended with the Yankees winning the World Series, Ichiro beat The Mariano in the bottom of the ninth with . . . a two-run homer that landed about fifteen rows up the right field seats.

If you consider as I do that a real batting average should add your total bases (which account for your hits on their terms, as opposed to traditional batting average treating all hits equally which they aren’t), walks, and sacrifices and divide by your plate appearances, Ichiro’s .449 is still ahead of a few Hall of Famers, though it’d be the lowest among Hall of Fame right fielders when he’s elected.

It’d be higher if he was any kind of real extra base hitter; only 19 percent of his lifetime major league hits have gone for extra bases, and his legs probably did as much as anything else to leave him the active leader in career triples after last season ended. (His 3,000th major league hit was a triple, in August 2016, and just missed being a home run by a couple of feet.)

He left the Mariners for the first time after asking for a trade, knowing the team needed a rebuild and knowing he was as frustrated with their post-2002 slumpings as some teammates were with his frustration. He became a useful Yankee and an even more part-time spare part Marlin; he returned to the Mariners last year but played only fifteen games before being moved to the front office. Not the way you imagined baseball’s international hit king to go gently into that night as good and gray as Ichiro himself is now.

Best to remember the student and lover of the game running down balls in right field, stealing bases, entertaining fans in pre-game warmups by catching balls behind his back, or taking that singular batter’s box stance. Holding his bat out with his right hand as if holding a torch to light your way through a thicket. Moving into hitting position with his hands out a bit from the left side of his head, a hair above his shoulder, the bat angling above the shoulder. Lifting his front leg bent at the knee almost against his left knee. Stepping forward with his front foot hitting the ground a split second before swinging.

Fair disclosure: I did see Ichiro hit one out live and in person once upon a time. I took my son (then ten years old) to see the Angels against the Mariners, 31 July 2004. Early in the game, my son hollered “Hit a home run, Vladimir Guerrero!” when the Hall of Famer led off the bottom of the fourth—and Vlad the Impaler did exactly that, hitting Travis Blackley’s 3-1 service over the left field fence. By the top of the ninth the Angels led 7-6 and Ichiro led off against the Angels’ veteran then-closer Troy Percival.

Bryan wasn’t about to root for Ichiro no matter how good he knew Ichiro was, of course, being the die-hard Angel fan he still is. But this time he jolted with the entire ballpark when that swing hit Percival’s first pitch into the right field bleachers. Even Bryan was impressed, hollering wildly just for the thrill of seeing such an unlikely bomb. And after Ichiro crossed the plate, with extra innings looming, Bryan asked if we could amble down from the upper deck to get a choice seat, maybe, behind the left field bullpens.

With a lot of the crowd beginning to pour out of the ballpark I thought, well, why not? Except that the crowd leaving the ballpark was thick enough to take us two innings to get to that portion down below. Somewhere in there, Bret Boone singled Ichiro home in the top of the eleventh to put the Mariners up, 8-7, as we were told upon arrival down below.

Bryan and his father had barely sat down in a place behind the bullpens when, with Curtis Pride aboard on a leadoff single off the redoubtable Mariners reliever Eddie Guardado, Jose Guillen sent an 0-1 service into those bullpens for the game.

The man who’d proven Japanese position players could play and thrive in the American major leagues (pitchers had already done so) fought the inevitable end as long and sometimes as painfully as he could. But that Saturday afternoon he made a huge impression on my son (and his father) despite wearing enemy colours.

Thanks for that memory and for the Hall of Fame career, Ichiro. Here’s to a post-baseball life of peace that you’ve earned richly, and don’t let anyone take it from you.